The industry will soon move past the 48-megapixel camera craze as Realme will try to push the envelope and will launch a smartphone with a whopping 64-megapixel primary shooter.

A few weeks ago, Realme’s CEO teased the upcoming smartphone by posting a sample image taken with its 64-megapixel sensor. Now, the company confirmed that the device in subject will make its official debut on August 8, 2019, in India.

To achieve this feat, Realme used a 64-megapixel GW1 sensor from Samsung. This one has a size of 1/1.7-inches with mega 1.6µm pixel.

The best part is, the device will also come with three other cameras — completing the quadruple setup. Realme didn’t disclose what the other three can do. But we suspect that they will have a telephoto, ultra-wide, and depth-sensing capabilities. 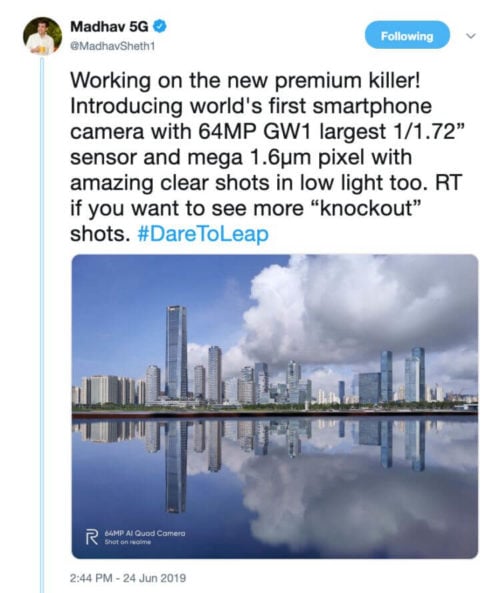 The rest of the specs remains a mystery. But due to the lack of hype about its processor, we might see the usual Qualcomm Snapdragon 710 processor from this device. The same chipset found on the Realme X.

It shall also borrow some features that the Realme 3 Pro have. There’s the 4,045mAh battery with VOOC 3.0 for one. It’s also plausible that the upcoming 64-megapixel Realme device will feature a Super AMOLED screen with an in-display fingerprint scanner.

But until then, we can never know for sure. All we have to do is wait until August 8, which is only a few days from now, to learn more about it.