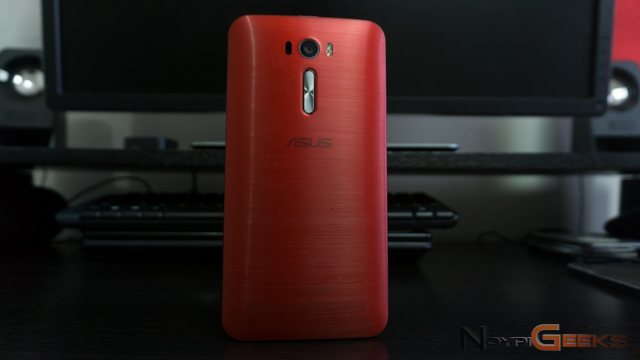 Asus is all about camera technology recently. We have reviewed the Asus Zenfone Selfie a few months back; We have also just seen the Asus Zenfone Zoom, which has a whopping 3x optical zoom, on an ultra-thin body. But before we head to that, let us first take a look with the Asus Zenfone 2 Laser 6.0, a more snap-shooter centric version of the already renowned Zenfone 2 line-up.

We certainly loved the first Zenfone 2 when we reviewed it, almost a year ago; And refresh from the company’s celebrated device is very much welcome, and we’re more than excited to take a look at it. 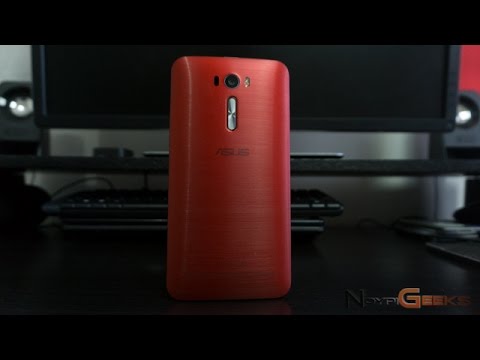 The Zenfone 2 Laser 6.0 looks exactly identical with not only its predecessors but also with almost all of the Zenfone devices. For starters, we still have the ergonomic Arc design — a curve at the back makes it deceptively thin, so the internals weren’t compromised. Plus, it makes the bulky device easy to hold despite the fact. We do commend Asus for doing such, as we have seen other companies slim down the battery to achieve some nonsense thinness. However, the device still feels huge, in general. This enormous device is a hassle to store inside a pocket, as it really gives a big hump. There’s also some noticeable heft to it, when compared to other similar devices. The hurdle on the device’s comfort during in use are all the result of its large 6.0 display. If media consumption is top priority, the large screen real-estate can really hit the spot.  On the bright side, the Zenfone 2 Laser is probably the sleekest 6-inch device that we got our hands on — with its 72% screen-to-body ratio, the bezels are thinner than usual — thus, there’s no room that went to waste. There’s also a huge potential for dual-screen multitasking, but Asus doesn’t have it built-in in its clunky interface, which we will talk about more on the software section. The front is also covered by Corning Gorilla Glass 4 — which is probably the best glass in the industry today.

All of the buttons are still in their respective places — but I wish Asus remapped them. In our other Zenfone reviews, we have  criticized the buttons on those devices. The power/lack button is placed at the top, which is hard to reach, especially on a large device like this; the volume control, despite seemingly placed comfortably at the back, is still hard to operate. The button is easy to reach, sure, but it is hard to press, as applying pressure pushes the entire device forward. Taking a look at the back, we do still see the fake brush metal panel. It is just fitting that Asus didn’t went to a real metal on this thing, as doing so is not only cost impractical, but it can also drastically add weight to the already chunky device. And since we’re here, let us talk about this speakers. The Zenfone 2 Laser’s webpage boasts that it has dual-driver audio chamber, five-magnet construction and metal voice coil…. We definitely have no idea what are this alien terms are, but these specs are as fancy as what the speakers can actually deliver. The volume is loud, the lows or bass is present, although it kind of over-powered the treble or highs. Music and movies sound great on this thing incredible depth, but standard videos like podcasts sounds a bit terrible, as voices doesn’t come out clean.

The design accent at the lip of the device also makes a comeback — a touch that is within Aus’s design language. Right above it are the capacitive buttons. All of the other hardware are in the same exact positions, where you expect them to be. As what I have stated earlier, the Zenfone 2 Laser 6.0 flaunts a large 6″ display, hence the device’s name. This is not the largest screen that is on record, but it sure is one of the hard hitters. Despite being ginormous, this IPS display also offers good quality with its 1080 x 1920 resolution, which has a 367 pixels-per-inch.

The display surely isn’t the sharpest of all, considering its large screen (The larger the display, the more easily visible individual pixels are), and of course, the existence of smartphones with 1440p resolutions. But nonetheless, the screen on this thing still delivers impressive performance for the price. Colors are beautiful, blacks are deep enough, and texts are visible even when zoomed out. However, screen brightness is a bit lacking, which makes sunlight and outdoor visibility challenging.

The ASUS Zenfone 2 Laser 6.0 runs under Android 5.0 Lollipop, on top of its inevitable Asus ZenUI. The ZenUI is present to almost all of Asus’s device — like TouchWiz to Galaxies — and I wish it doesn’t. ZenUI is the heaviest and messiest manufacturer-made interface that I have seen. Just like TouchWiz, ZenUI offers tons on rather unnecessary and uninstallable apps, unfamiliar design touches, and other implementations.There are tons of crapwares, that are bombarding the update page on the Play Store when you setup the device.

However, it is really a love-it-or-hate-it situation, not unless you want to take the risk of jailbreaking your phone; or installing another third-party skin, which can further bog down the device.

But if we’ll be optimistic about it, the some of these shenanigans actually bring something good to the table. For one, there’s an app that delivers detailed information about the weather (temperature, sunrise/sunset time, and even an UltaViolet warning). There are also apps for easy data transfer, RAM management, schedule management, and many more.

There are some features that are absolutely welcome:  the off-screen gestures for instant access, one-hand feature, and others that are present in almost all Android devices.

We have a Qualcomm Snapdragon 616 CPU under the hood — a big break from all competing device that has MediaTek inside. This thing has a 64-bit octa-core processor, which is a combination of a quad-core 1.7GHz Cortex-A53 and a quad-core 1.2GHz Cortex A-53. These are all backed up by 3GB of RAM, and an Adreno 405 GPU.

Processing performance has been satisfying — other than the usual stutters and app crashes that are a standard to Android. Titles like Mortal Kombat X and Asphalt 8: Airborne ran decently, with barely visible frame drops. Although, stutters tend to show on an amusement park simulator game called Roller Coaster Tycoon. The processor may have been having trouble processing all of the tiny elements and AI like the rides and population that are moving independently during the game. The device also gets warm during some extensive gaming — which is expected to some Snapdragon processors like this.

Multitasking is also applaudable on this one. You can easily switch between day-to-day apps and games instantly, without any causing any of anything to restart. You can load a full 1-hour YouTube video and seamlessly glide through the timeline.

The large display and RAM capacity gave the Zenfone Laser 6.0 a great potential for dual-screen multitasking, but Asus didn’t included a software  out-off-the-bat to utilize it.

The device’s obvious prowess is definitely on the camera department. We have a 13-megapixel primary camera, with a wide aperture of f/2.0, dual-ton flash, and of course, a fast laser autofocus. There’s also a 5-megapixel front shooter, that also boasts an f/2.0 aperture.

The quality of the photos that you can have this thing are unsurprisingly impressive. Color reproduction is fairly accurate, sick dynamic range with good contrast ratio; sharpness is also on point, however, zooming-in a little reveals some minor software over-sharpening, which is almost a lot of manufacturers are guilty of doing so.

But, the Zenfone Laser 6.0 isn’t safe from the hurdles of shooting in low-light scenarios; but it still managed to get away with it impressively — possibly one of the best low-light performers I have seen in a while. Noise and grains aren’t as aggressive as what I would have expected; Colors maintained majority of the colors. Overall, a pretty usable photo.

The ultra-fast laser autofocus also did a great job, but you’ll barely notice the difference with other devices on the market. It also struggles to find the right focus in most of my testing.

Having a great hardware is just half of the story on achieving a great camera experience. We also have a feature-packed camera app. Right off the bat, we can see right away the built in leveler, to assure the user that they can take well-angled photos.

There are also tons of available modes — HDR, Beautification, Miniature, etc. Probably the most essential and useful is the Manual Mode, which lets you control the ISO, Focus, Exposure, and much more. I used this mode most of the time, as the device struggles to adjust the settings properly, which results to a mediocre photo.

The ASUS Laser 6.0 also sports a beefy set of antennas. For starters, we have 4G connectivity available on both of its micro-sim cards. Network speed during web browsing and video streaming in best case scenarios. Speeds will now vary depending on your location and Internet Service Provider.

There’s also WiFi b/g/n that’s built in, for stable and reliable connection to your home or any public networks;  and the latest Bluetooth 4.1, for seamless connection with any of your accessories, like wireless speakers and headphones, and of course, data transfer.

Powering this mammoth is a 3000mAh battery. A capacity that was sufficient enough to deliver acceptable battery longevity, but not astonishing. Screen-on time passed our 4-hour passing mark. That is hours of internet browsing, streaming videos online and playing games. While light to moderate usage lasted me for about 8 to 10 hours; that is sending and receiving SMS from time to time, and casual social media browsing.

The device can do last you a day, and would require a good two hours of recharging to go back to 100%.

Parting ways with the Asus Zenfone 2 Laser 6.0 have been tough. Almost all of the company’s recent releases really gave a big impact. It is seldom that we see such budget device from a well-known manufacturer; You can argue that the Laser 6.0 is really pricey for its Php 11,995 price tag, but for what it delivers, it is hard to complain.

The device sure is hard to carry around due to its bulkiness, but this is the result of its large display — which can give enough real estate for immersive gaming and multitasking; the capable processor and large 3GB of RAM also support that purpose.

Of course, the camera department also has a lot to brag about. It can take impressive photos, something that you won’t see every day on Phablets. And Asus didn’t stopped there — the Zenfone 2 Laser also packs a speedy 4G connectivity in two of its sim-card and other  latest in connectivity technology like WiFi b/g/n and Bluetooth 4.1.

The ASUS Zenfone 2 Laser 6.0 is near to perfection, if only Asus have learned their lesson. The hard-to-use buttons were still a pain; and the clunky software should be toned-down so it is less overwhelming.