Samsung’s Note series are well-known to be the line of devices that are basically on steroids. Ginormous displays, beefy processors, large and replaceable batteries, expandable storage, and of course, the S Pen — these are its major characteristics that made this Phablet pioneer a geek’s dream device.

But, since the release of the Galaxy S6 series, Samsung opted to exclude some features that are a standard to its devices, especially to the Note series, on exchange for a rejuvenated aesthetics. Having the device sandwiched with beautiful glass, and have metals on the sides leaves the exclusion of a removable back panel; which then raised a big concern to the Note’s avid fans — fans who some are hardcore users that demand’s an easily swappable battery, so the device can cope up with their demanding needs.

Did Samsung made the right decisions? Was it all worth the risk? Let’s figure that out in our full review.

In real smartphone fashion, companies tend to stick to a certain aesthetic theme as they design new products. Manufacturers usually use the same footprints of a device in a span of two generations. The Samsung Galaxy Note 5 has the looks with the earlier Galaxy S6 devices, which is a good thing. In our Samsung Galaxy S6 Edge review, we’ve praised how beautiful that device was. Not only that it was a step up from the company’s usual all-plastic build, but it was just the most stunning and elegant smartphone that we had our hands on. 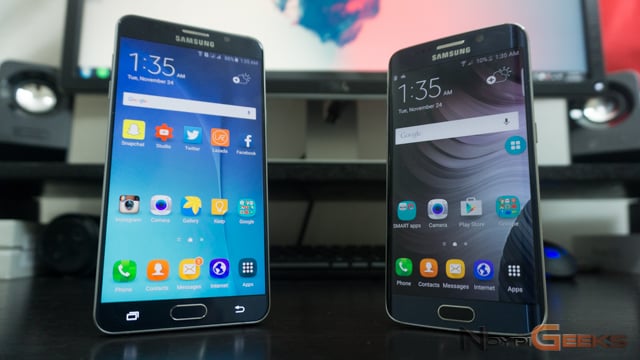 The Note 5 has a 7000 series aluminum sides, and also being sandwiched by Corning Gorilla Glass 4, which easily screams premium build quality right in your face. But it is not without its drawbacks, the glass surface is insanely prone to fingerprint marks, plus, it also makes the device a little slippery. But to compensate the slippy surface,  the edges at the back is also slightly curved to increase ergonomics. Although, if you’re okay with hiding and not be able to caress this gorgeous device, I do recommend the use of any protective case, especially to those who have butterfingers. 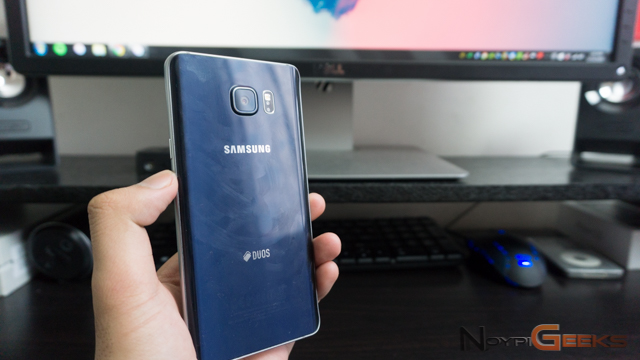 The Galaxy Note 5 also looks and feels thinner, lighter and more compact than any other previous  Note devices. This is due to its sleek profile, which is a good thing, but it is also the result of some omitted features, which is all sorts of bad. Just like the Galaxy S6 devices, this new Galaxy Note now doesn’t sport micrsoSD card slot and a removable battery. The entire Note line-up was one of the top choice of a lot of power and productivity users due to its S-Pen,  large display, and of course, having the ability to swap batteries as they ran out, and having to expand their storage space to house all their media.  What a disappointing move from Sammy. 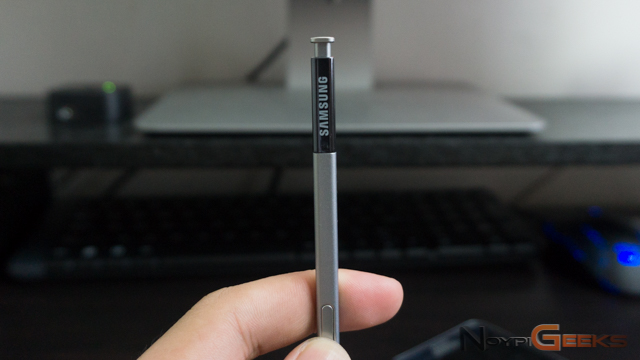 Speaking of the S Pen, the device’s best accessory have also been revamped. The tip is now more pointy and sharp, plus, let us not forget about that click-y top of the pen. It actually doesn’t do anything besides having to easily pull out the S Pen from the smartphone, but the habit of rapidly clicking it is pretty addicting. We may have developed this habit with our real ballpoint pens — do you remember clicking and playing your pen while sitting on a boring class?

Probably one of the features that the Note series are known for their enormous, and pixel-packed displays. And with the line-up’s fifth iteration, Samsung opted for a 5.7″ Super AMOLED display, which has a super sharp 1440 x 2560 QHD resolution, with 501 pixels-per-inch. The screen on this one is, if not the best, one of the most stunning display in the market today. AMOLED displays are known for its rich colors; deep blacks, as a pixel is literally shut down when exhibiting dark areas. The ultra-high resolution display is also a pleasure to use not only for media consumption but also at reading texts as the sharpness fidelity of every word is still on point even when zoomed out. 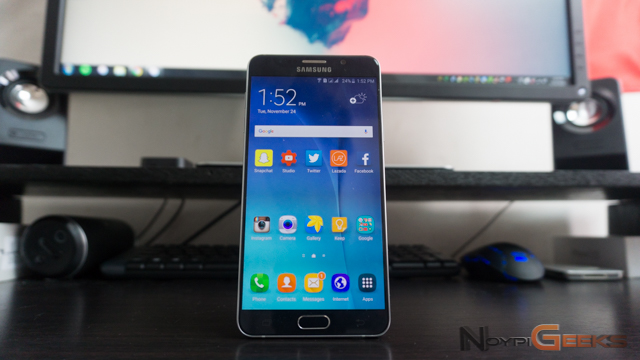 Other than the display, the front also houses the 5-megapixel front-facing camera, earpiece, an LED notification indicator, the recent apps and back capacitive buttons, and of course, the home button with a fingerprint scanner embedded. Setting up this security feature have been a breeze, and works well after that. It’s fast and snappy. Samsung’s fingerprint scanner have come a long way since the Galaxy S5.

We do also have the lock/power switch at the left side, and the volume controls on the other. The buttons themselves are also super-thin, which matches the device’s entire sleekness. They are also tactile enough and comfortable to press. 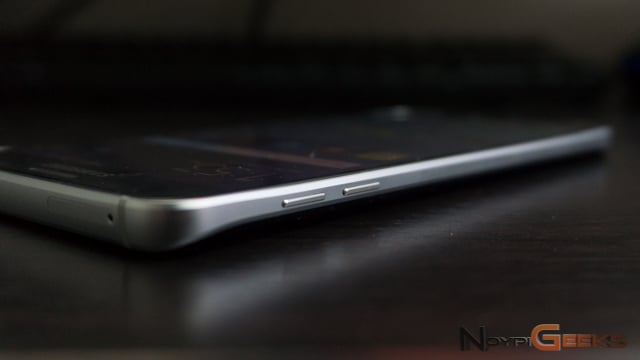 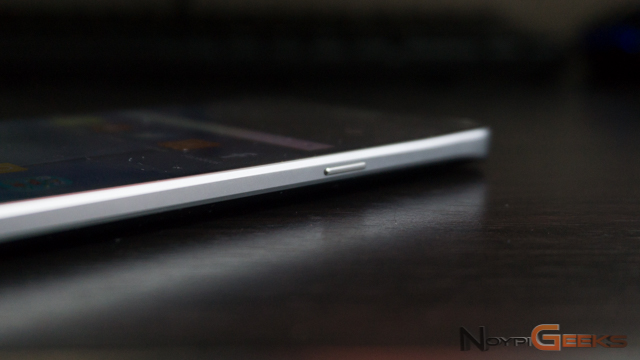 At the top we do have a noise-cancelling microphone and a dual-sim card slot. Yup, the variant that is available in the Philippines is capable of sporting two sim cards. Although, I wish Samsung made the other slot optional to either house another sim card, or a microSD card slot, something that we saw on the Cherry Mobile S4 Plus. Another rant, Samsung now also removed the IR Blaster on this device. Although a lot of users before didn’t actually  fully embraced the use of it, but still, it’s a nice thing to have. 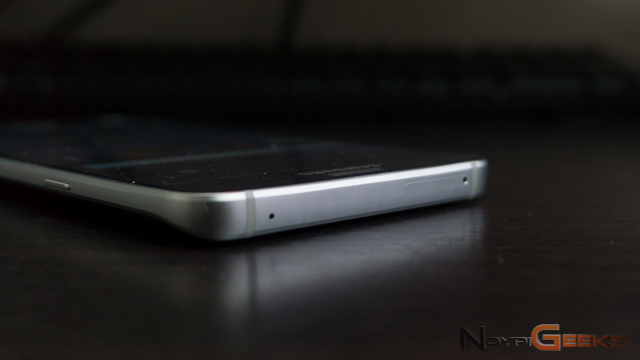 At the back we have the 16-megapixel primary camera with LED flash, and the heart-rate sensor. 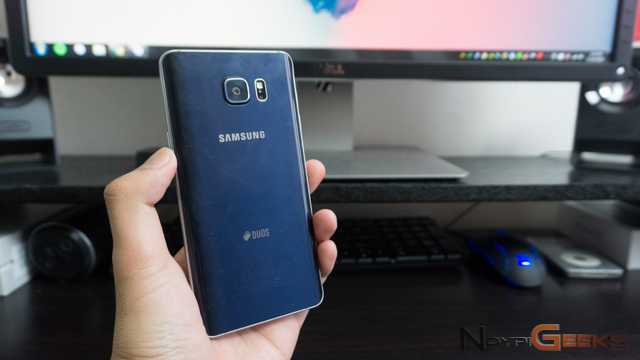 At the bottom, we have the 3.5mm headphone jack, microUSB port, the loudspeaker, and the slot for the S Pen. The loudspeaker’s performance have been very great. The volume is loud, well-balanced, without any noticeable distortion. Although, just like any other bottom-firing speakers, the drivers can be easily blocked when using the device in landscape. A screen orientation that is commonly used when watching movies or playing games. 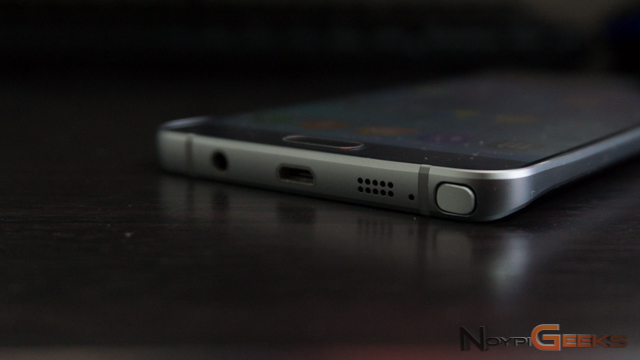 Samsung went with its own muscle on this one. We have a 64-bit Exynos 7420 chipset, which has two quad-core processors that are clocked at 2.1GHz and 1.5GHz respectively. We also have a spacious 4GB of RAM, and a Mali-T760MP8 GPU.

Well, there’s nothing much to say on this part. The device’s processing performance is just off the hook. Games ran fluidly, at the highest possible frame rate; other productivity and day-to-day apps are a breeze to use on this thing. Opening applications and switching between them, or using them concurrently via multi-window is also seamless, thanks to its large RAM capacity.

Overheating is almost non-existent; not unless you play heavy game titles extensively.

Check out these benchmark tests results:

The Galaxy Note 5 is being ran by Android 5.1.1 Lollipop, an operating system that is evidently not the latest, but still one of the best from Google. And knowing Samsung, we can expect Android Marshmallow arriving anytime soon. Of course, we also have the company’s very own TouchWiz interface on top of Android. An UX that was long-known for bugging down the previous Samsung devices, but have been praised after its overhaul, which we first saw on the Galaxy S6 devices.

With that said, everything still looks familiar. We have a bunch of rounded objects, from the app icons, drop-down menu buttons, and many more; the settings menu, which still has Quick Settings inside; a Search button found almost anywhere, including the notifications tab; and a lot more of Samsung’s shenanigans.

Multi-window is also present, which perfectly utilizes the device’s enormous display and large RAM, which is a big pro for productivity junkies. Each windows can be scaled, have it interact with each other ( i.e drag a photo from the gallery to a messenger app for instant attachment.), or be minimized in to tiny bubbles.

The S Pen also have some new tricks up its sleeves. Probably the one thing that we liked the most is its ability to take quick note —  like, super quick. You can simply pop-out the S Pen, and the display will automatically respond, with the screen still off, but now ready to be written on. The quick note will be automatically saved as you slide the S Pen back to its resting place. The accessory can also help you to take long screenshots, perfect for those worth-sharing webpages. 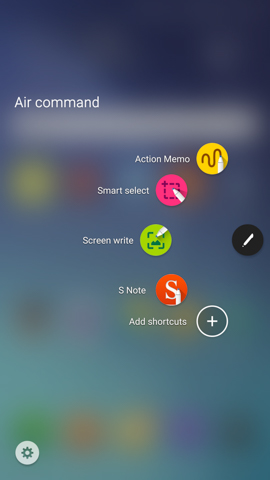 The Galaxy Note 5 utilizes a 16-megapixel Sony sensor on its primary camera; come equipped with a wide f/1.9 lens, and an Optical Image Stabilizer. The same set of attributes we have seen on the earlier S6 devices. There’s also a dual-tone flash, and a 5-megapixel front-facing camera with a 120-degree wide-angle lens.

And just like what we have seen on our S6 Edge review, the camera sensor can surely take some amazing shots — one of the best we have seen on any smartphone today. Photos looks insanely sharp, with details still clear even when zoomed in; contrast is good, with ample and not exaggerated saturation. Dynamic range is also imposing.

The included Optical Image Stabilizer also works seamlessly. Handheld videos looks smooth and less shaky; while stills at low-light also appear fairly clean and less grainy. And speaking of videos, the Samsung Galaxy Note 5 can record clips of up to 4K resolution, 1080p at 30fps and 60fps, and 720p at up to 120fps for those glorious slow-mo.

The camera app also takes the same footprints from the earlier Samsung devices. The app can be easily launched by pressing the home button twice, anywhere from the UI. The camera app holster’s a bunch of presets and modes; and what we think the most essential is the Pro mode. This particular function is now becoming a trend to almost all smartphones, as mobile camera sensors are now upping their quality. We can manually adjust the ISO, White Balance, Shutter Speed, and focus on this thing. The device can also shoot in RAW, a feature that completes all of your professional-snapper needs.

Sammy’s new phablet is powered by a 3000mAh battery, a capacity that looks a little underpowered on paper, considering the device’s large, high-res display and a muscle-y processor; but still, was able to impress us during our tests. 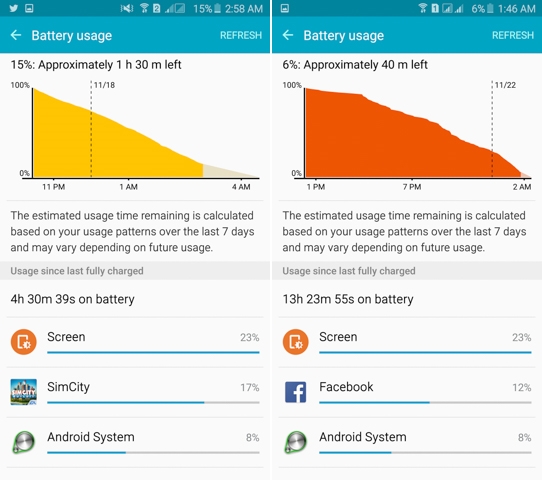 Screen-on time lasted for about 4hrs and 30mins. That’s hours of uninterrupted gaming, online video streaming, and web browsing. While light to moderate usage like some casual social media surfing, receiving/sending SMS and calls lasted the device for a whole daytime, with almost 12hrs on record.

With that, it’s without a doubt that this device can last you a day. But if you’re really a hardcore user, the Note 5’s ultra-fast charging capability may be comforting. The device can go back to 50%  in just half an hour; 100% in about 1hr and 30mins. The Note 5’s rapid charging ability is also carried during wireless charging, with a compatible wireless charger.

Samsung yet again impressed us with its new phablet. Sure, the Samsung Galaxy Note 5 omitted some of its prominent hallmarks, but still, it is not far from being perfect. We have no idea what was on Sammy’s mind when they decided not to go all out on this one, but still, we cannot find enough reason to hate them. 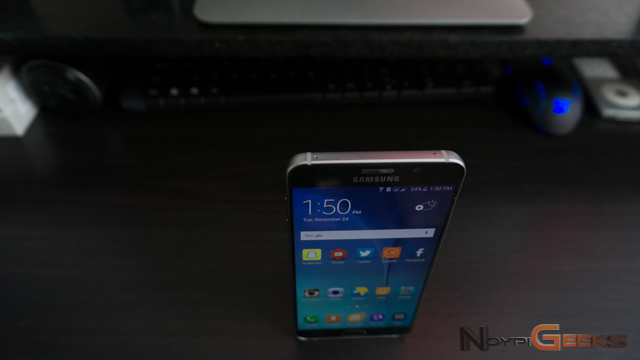 The Note series were known to be the “power-user’s device”, but with the line’s fifth iteration, things might be never the same. The exclusion of a removable battery, and an expandable storage is a major hit to its, then, prospected market. These consumers who utilize their device too much always lugs extra batteries with them for easy recharge. They also make use of high-end, and spacious memory cards so they don’t have to worry about running out of storage, as they stock up tons of files with them. This device just won’t cut it anymore.

Instead, the Note 5 is now for someone who’s looking for an over-powered, good-looking device. The non-removable battery status translates to a more premium crafted device; we got a glass-on-glass, metal-sides aesthetics, a departure from the all-plastic construction from previous devices.

If this review convinced you to consider the Samsung Galaxy Note 5, you can have yours with Smart’s all-in, fully customizable all-in plans! Check out their amazing deals HERE!