While there are vast of smartphones to choose from, Cherry Mobile has revealed one of its newest devices that joins numerous phones running under Google’s lighter mobile operating system named Android Go.

Wondering what could you win over? Keep scrolling down, read our full review, and take some good note of Cherry Mobile’s Omega Lite 4.

If you have a limited budget and you plan to buy a good-looking smartphone, the Cherry Mobile Omega Lite 4 should be on top of the list.

Upon opening the box, I immediately noticed its stylish design. I personally like smartphones which are light and sleek-looking. And that’s how Omega Lite 4 is.

Up front, the device has a 5-inch 18:9 aspect ratio TrueView display secured by a pre-installed protector. There’s also the call speaker vent, LED notification light, and the 5-megapixel front camera.

Even though the Cherry Mobile Omega Lite 4 looks good, the top and bottom bezels are quite thick compared to its sides. It would have been better if it has thin bezels on all sides of the handset, but that’s often how it is considering there are necessary hardware hidden underneath.

Power/lock button and volume rocks are located on the right side, leaving the left side bare.

On top is where the 3.5 mm audio and micro USB port is positioned, while the main microphone and loudspeakers are located at the bottom of the device.

Flipping the Cherry Mobile Omega Lite 4 to its back will show you the 8-megapixel rear camera with an LED flash placed in the upper right corner. As a customary to a Cherry Mobile device, the brand’s name is written at the back cover with matte finish.

Matte-finished covers usually receive a thumbs-up for me since I would not worry so much that the device might slightly slide from my hands since mine’s a little bit sweaty.

Underneath the back cover will show you the slots for the removable battery pack, two nano SIM cards, and a micro SD card.

What’s funny about receiving the unit is I actually had a hard time realizing how to open the back cover so I could put the battery pack. Honestly, it took me about three minutes to notice the nick located at the bottom right side of the device. The back cover includes the cover of the sides – which made me think twice about removing the whole lot of it because it might break. 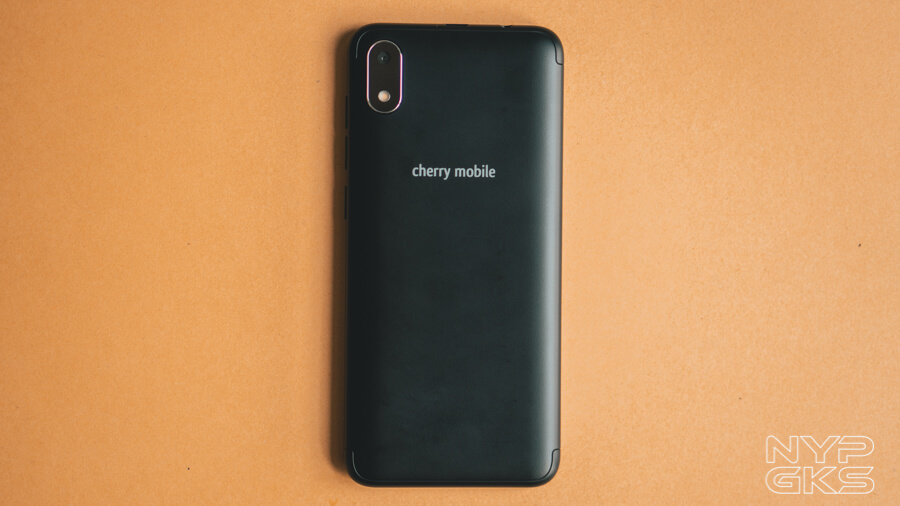 Cherry Mobile Omega Lite 4 has a 5-inch LCD display with an FWVGA+ resolution. The colors are just fine even if the brightness level is at its lowest point. But of course, for outdoor use, you may want to adjust your device’s brightness level — depending on your preference. Although in some cases, it’s not bright enough to the point that I have to cover it with my hand to see what’s on my screen.

The sharpness of the screen isn’t really impressive, considering its low 960 x 480 pixel resolution. But that’s what we expected from a device of the caliber because Cherry Mobile needed to cut some corners to get to a price tag this low.

Loudspeakers are not that noteworthy as it levels with several entry-level devices across the market. The earphones are fine, but it’s much better if you’ll use your preferred and higher quality earphones for a better experience. 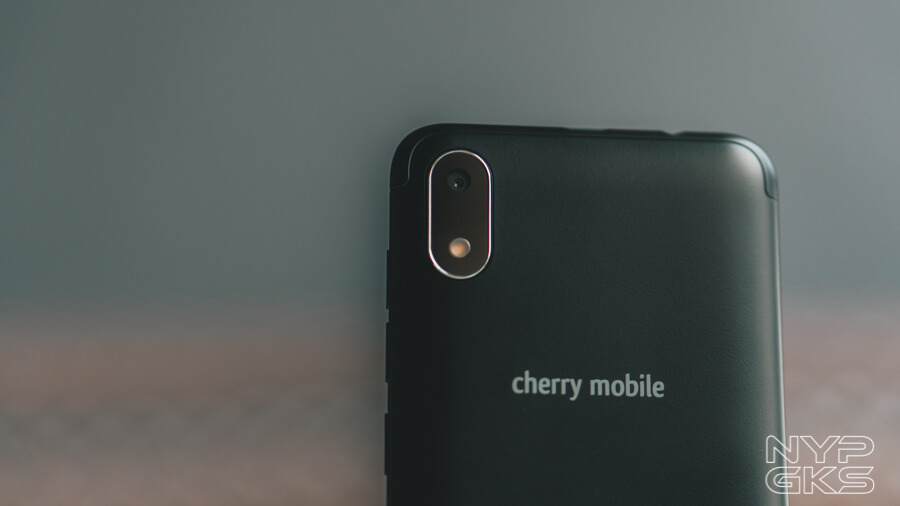 Though I can conclude that photos taken from this handheld are not that remarkable, Cherry Mobile Omega Lite 4 takes acceptable photos for you to post in social media sites.

For a low-cost entry-level device, the 8-megapixel rear camera offers only a few modes such as panorama and beauty mode among others. Photos taken are hits or miss in terms of color, exposure, and focus. On the other hand, the front camera produces slightly dark pictures when taken in dim lighting conditions.

Here are some sample photos:

Surprisingly, the operating system is smooth-sailing, which makes swiping from left and right, up and down easy to do. Navigating the main menu is also fast as you can just swipe up to see all your applications.

Cherry Mobile Omega Lite 4 has 8GB internal storage, but upon setting up the phone, the system already took 3.28GB from it. 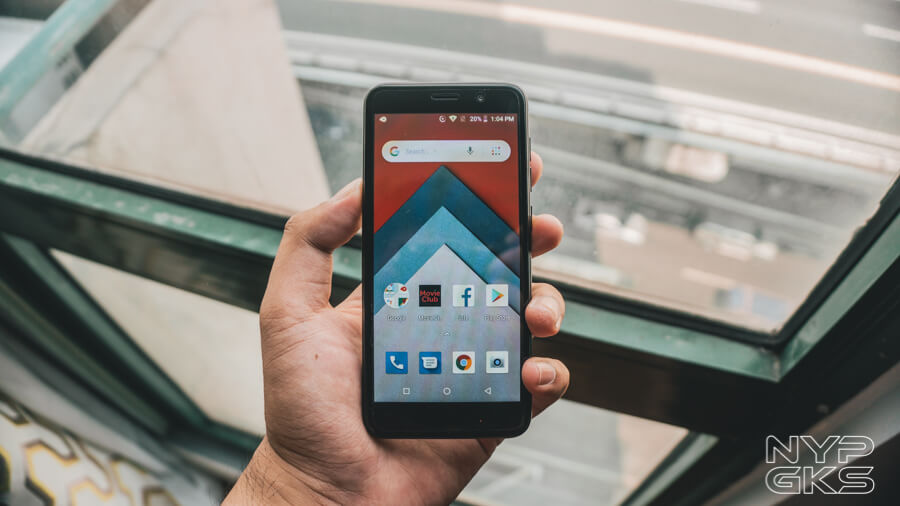 However, Android Go allows lower space and leeway so entry-level phones like Omega Lite 4 can still be competitive as it can run Lite or Go applications. Some of the pre-installed apps are Google Go apps, Youtube Go, Facebook Lite, and Cherry Mobile Movie Club.

But as long as it’s compatible with Cherry Mobile Omega Lite 4’s system and storage, you may still download from the Play Store any applications you deemed to have. Also, it supports microSD cards so you can easily add more storage later on.

The Cherry Mobile Omega Lite 4 is powered by a measly MediaTek MT6580 chipset and 1GB of RAM. With this, I cannot blame you from expecting that this smartphone may be a little slow in responding, considering that there are many applications already installed in it.

However, the phone was still able to maintain a satisfactory operation, like shifting from one application to another.

If you want the Cherry Mobile Omega Lite 4 for games, obviously, it’ll never work out like what you might expect. I tried playing Helix Jump and I have experienced some lags — so I’ll leave you the thoughts of playing higher resource-intensive games. But to save you some time, I’d say don’t ever try it because they are never going to work well.

I was able to test the Cherry Mobile Omega Lite 4 on popular benchmarks apps like AnTuTu, GeekBench. Here are the results:

The Cherry Mobile Omega Lite 4 is provided with 3G HSPA+, WiFi 802.11, Bluetooth 4.0, and GPS. Connecting to the internet and mobile data takes just a little time since it’s only 3G. It would have been better if it has 4G, but we can’t really complain because it’s cheap.

Calls received from Omega Lite 4’s speakers are commendable as you can still hear even if you’re in a crowded place.

From 20% battery life, it took the phone almost two hours to full charge. It houses a 2,000 mAh battery pack. With my experience, the phone lasted for 18 hours without using battery-draining applications. Moreover, it lasted almost 8 hours while using Facebook, YouTube, and Google for some research. 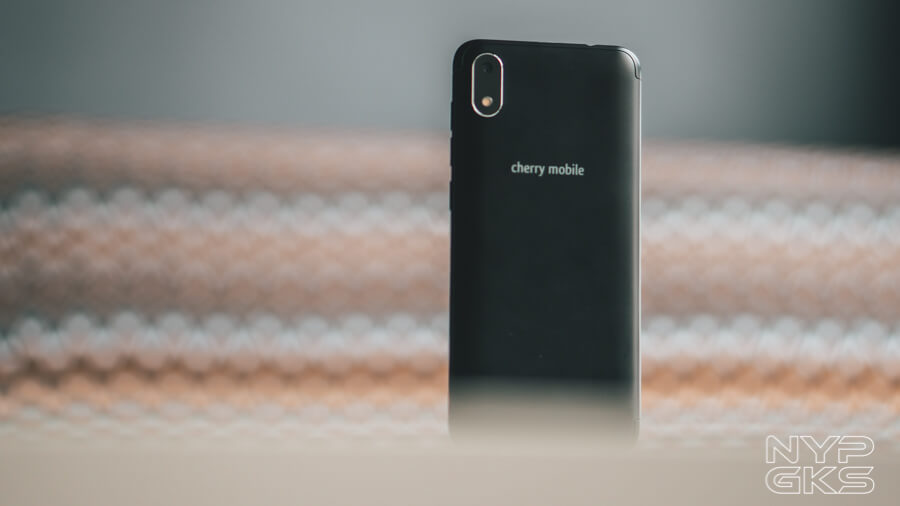 If you’re looking for a smartphone which carries decent specs but with a limited budget, there’s a lot of devices to choose from. You could pick up one from MyPhone or Cloudfone, but choosing Cherry Mobile Omega Lite 4 is not a bad decision either. However, what we recommend is to save up a little bit more and get the new Cherry Mobile Flare S7 series.

You can buy the Android Go-powered Cherry Mobile Omega Lite 4 for a price of only Php2,999.