Pop-up camera is a hit or miss. Either you’ll love it or you’ll abhor it. There’s definitely no in-between. Despite that, many smartphone manufacturers have opted to use this technology in their smartphones because of its pronounced advantages — notch-free fullscreen display and higher screen-to-body ratio.

It’s no wonder why Honor finally decided to incorporate the pop-up camera to its latest smartphone— the Honor 9X. The device is the first from Honor to ditch the notch in exchange for an elevated front camera. The brand might be a little late in this trend but we’re still thrilled to see this from Honor.

Aside from the pop-up camera, the Honor 9X is a device to look out to in this price segment. We’ll give you a detailed review of what else this phone has to offer.

The Honor 9X looks premium and elegant for a midrange smartphone. It has a glass back panel that extends to the side. The sapphire blue variant has an intrinsic and edgy “X” pattern in its rear. The pattern becomes visible when light is reflected. However, in dim lighting, it isn’t that noticeable. For those who prefer simpler design, the device is also available in neutral black color. The disadvantage of the design however is that it easily gets fingerprint smudges.

Another notable feature of the the Honor 9X is its massive size. It has a huge 6.59-inch display that is larger than its predecessor, the Honor 8X. This only proves that Honor is transitioning the X line that into a borderline tablet. The phone is actually great for people who prefer smartphones with large display. However, for those with small hands, holding the phone feels quite unusual and may take a while to get used to.

The upper part of the phone houses the pop-up camera. Beside the front camera is a simcard tray. The power and volume buttons are placed at the right side. For all headphone purists out there, Honor 9x also has a 3.5mm headphone jack at the bottom part beside the type-C charging port and the speakers.

In terms of security, the phone has a fast and snappy fingerprint scanner at the back. We’re not a fan of the location of the fingerprint scanner. However, it’s nothing much to complain for phones at this price range. Unfortunately though, it lacks face unlock most probably because of its integration of the pop-up camera. 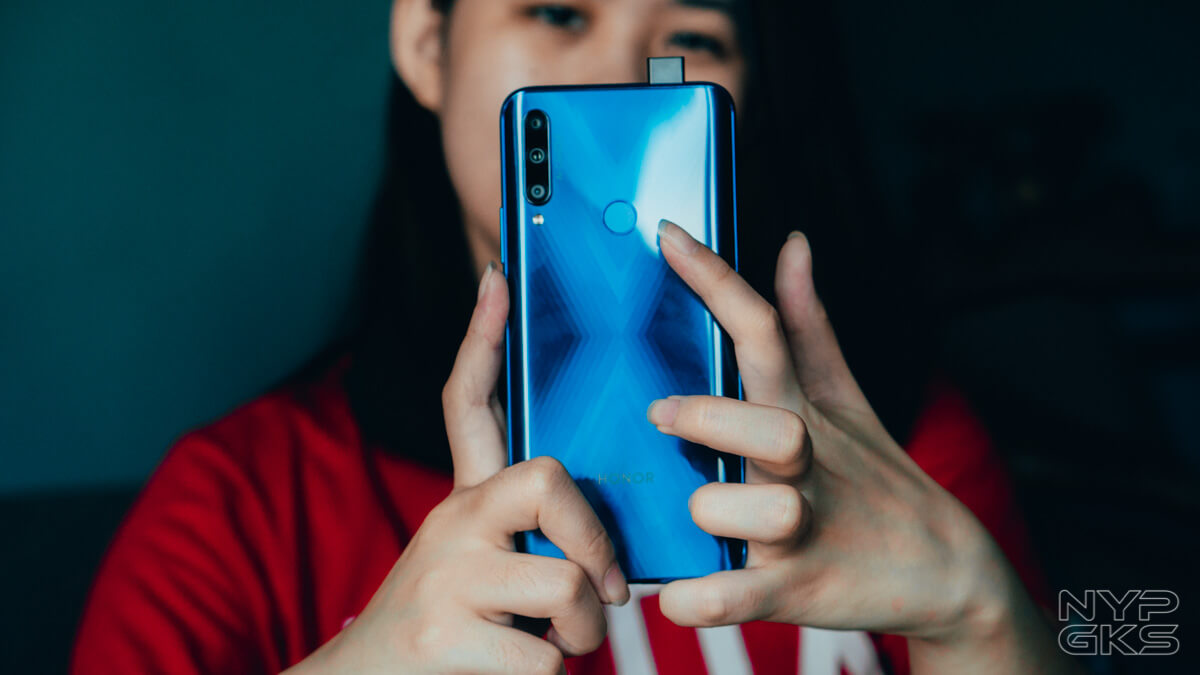 Honor 9x’s IPS-LCD display looks decent though lacks sharpness at closer look. However for this price range, it is pretty alright. It also has an impressive 91% screen-to-body ratio all thanks to the pop-up selfie camera. The bottom has a slightly larger bezel which is barely noticeable. Ditching the notch was indeed a good move for the brand as it was able to differentiate the Honor 9X from the competition in the market. 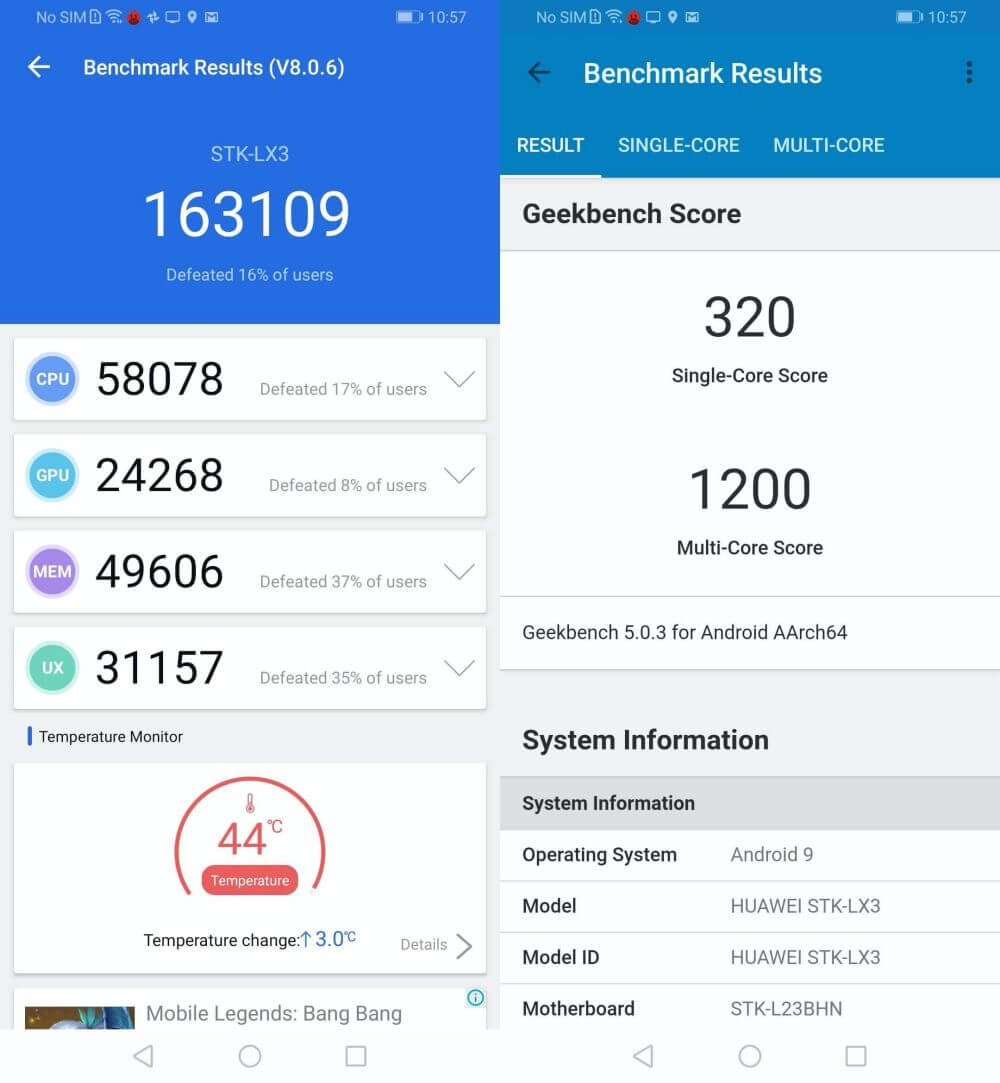 The Honor 9X has a generous 6GB of RAM and128GB of ROM. It is powered by Kirin 710F chipset. The phone performs just as expected for a midrange device. We didn’t experience any problems when doing daily and basic tasks such as social media browsing, video streaming and messaging.

It runs the EMUI 9.10 based on Android 9 Pie and has Play Store and all other Google Services. It isn’t the most powerful smartphone in the category but it is decent in terms of performance. 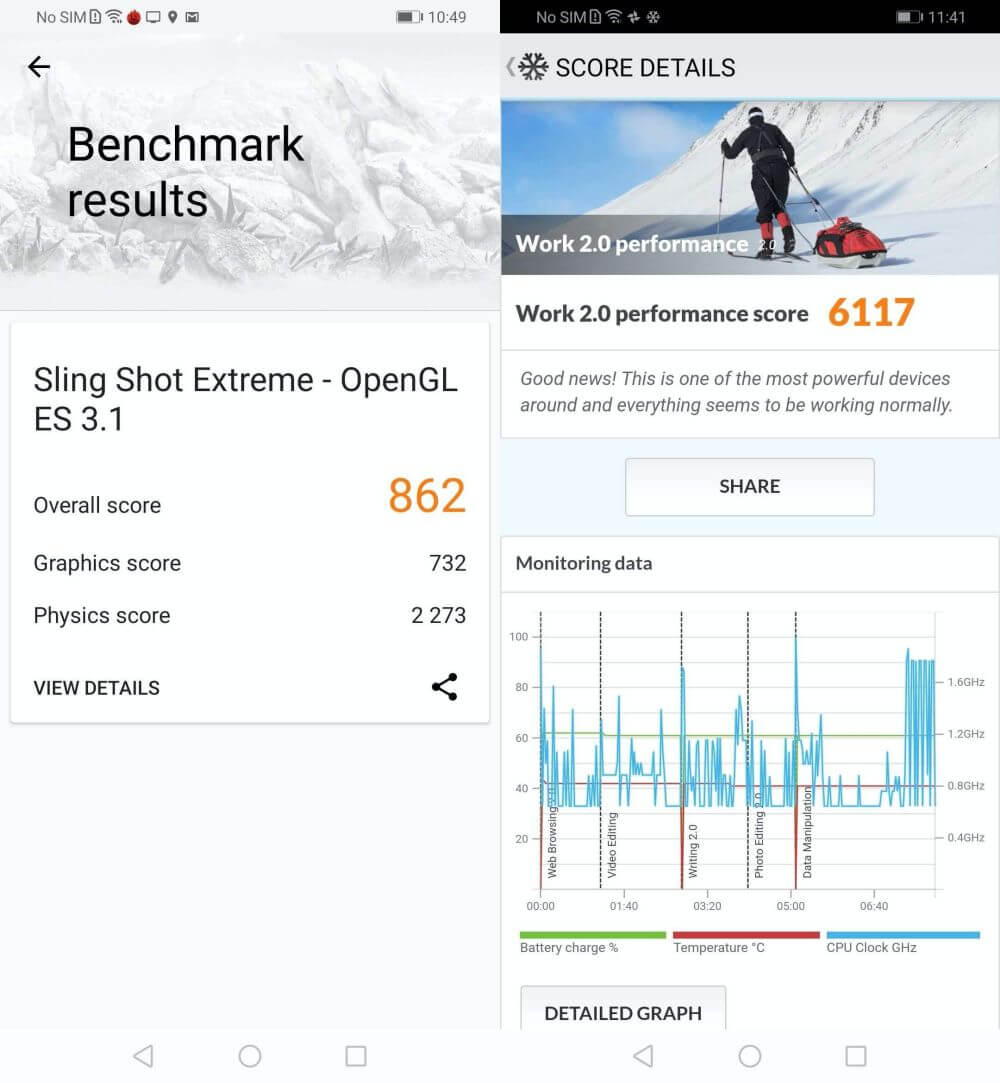 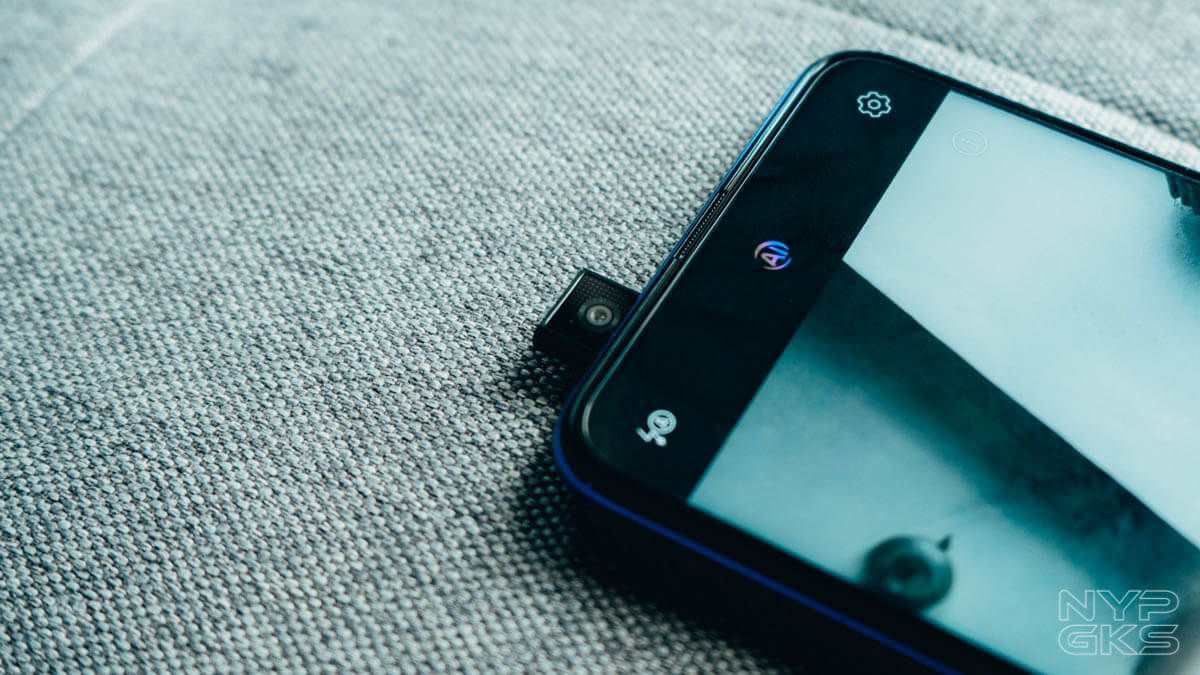 It’s no surprise that Honor opted for a triple-camera setup for Honor X9. Considering the tough competition in the mid-range smartphones, triple cameras has become the standard and going lower would be disadvantageous to the brand.

Photos taken using the phone’s main camera are good enough but not necessarily exceptional. In this price range, we’ve seen other phones performed better. The photos produced have little noise but is average in contrast and dynamic range. The photos are also seen be over-sharpened. 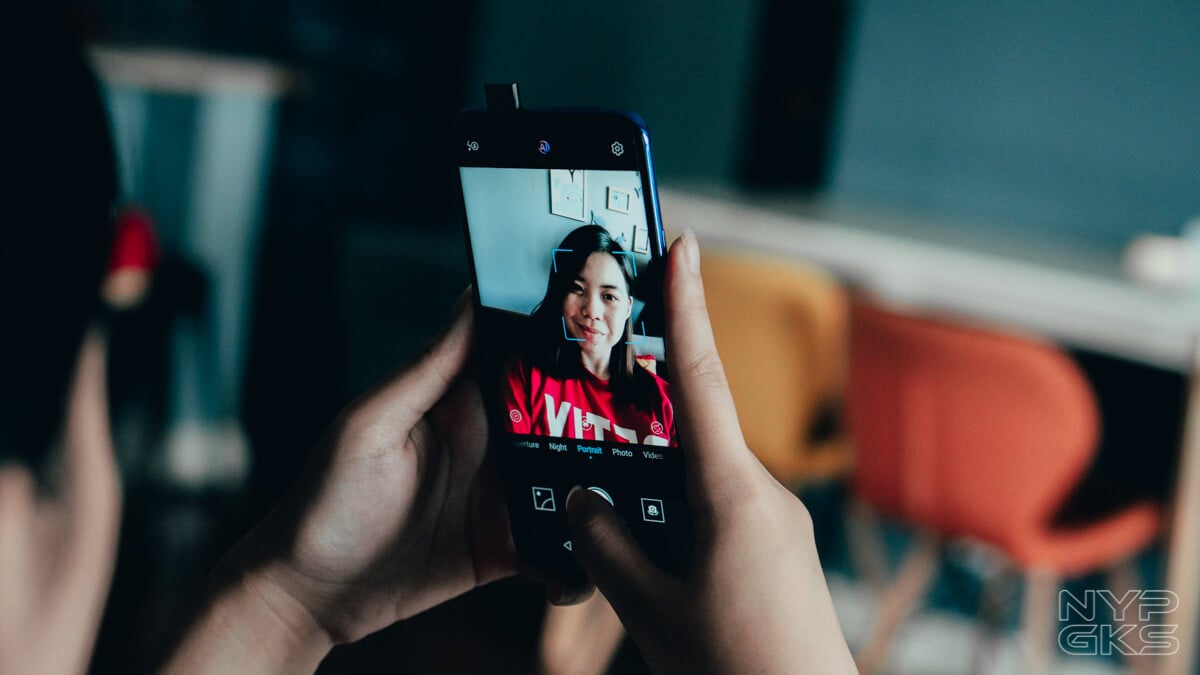 Another interesting feature of the Honor 9X is the super night mode. We tested the phone to see how well the camera performed during night time. The photos turned out to be sharper, clearer and has improved saturation and exposure compared to the default camera setting. However, when used in a dim environment with little to no light, the camera failed to give us any visible photos.

When it comes to the wide-angle sensor, it works just as expected. It can capture up to 120 degrees creating a fish-eye effect for the photo. The image quality is downgraded given that it’s only 8-megapixels but still decent enough if used for social media. However, it is disappointing that super night mode cannot be used alongside the wide angle lens.

The last feature is the portrait mode. The photos taken were decent but it is far from the quality of other more expensive smartphones. It is reasonable enough though. This part isn’t its strength but it’s just a good additional feature.

The phone features a 16-megapixel pop-up selfie camera which produces great selfies. It can detect and focus the face quite well.

The Honor 9x has 4000 mAh battery capacity which uses a type-C charging port. The battery capacity is not something impressive as we’ve seen other brands outlasting it. However, the phone can still last a day of normal internet usage which is still a good thing. Unfortunately though, its charging capacity is only limited to 10 watts. Thus, charging the phone might take a while. 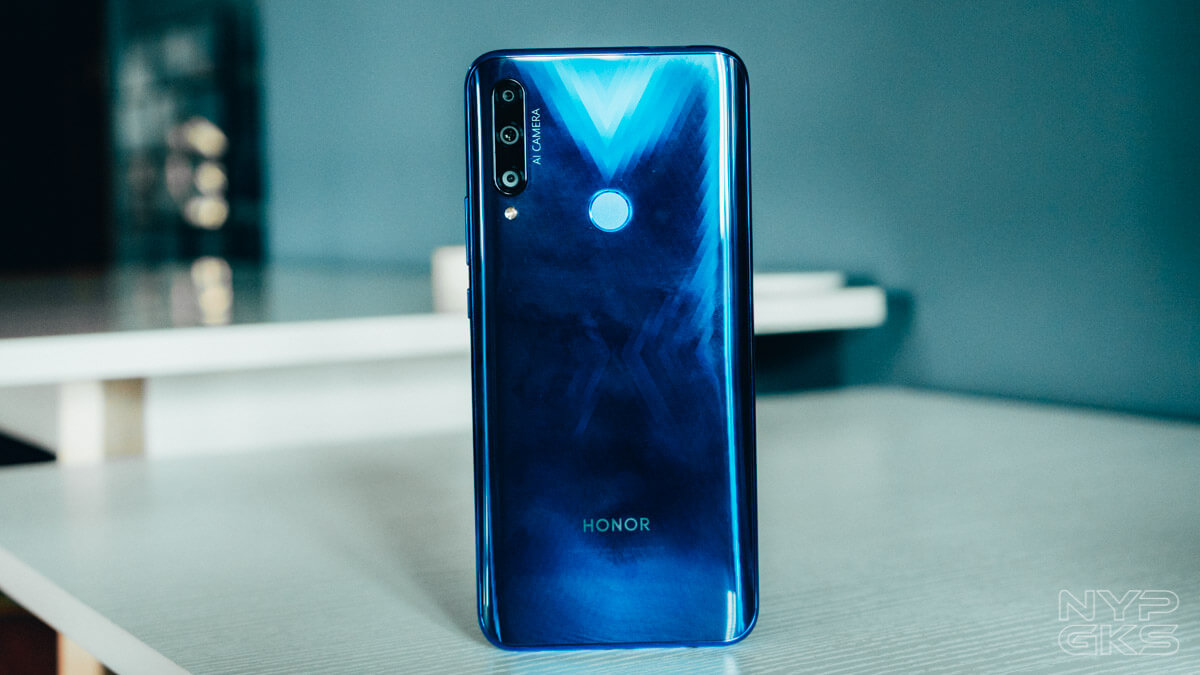 The Honor 9X is a good consideration for consumers who prefer notch-free smartphones. It looks great and its blue variant has an edgy design.

Its performance however is nothing impressive. Even though it can perform basic tasks without experiencing any issues, we’ve seen other brands out outdoing it in this aspect.

Pricing and availability in the Philippines

Honor 9X is available nationwide in all Honor stores nationwide and retails for a price of Php12,490. It’s also available online through Lazada and Shopee.