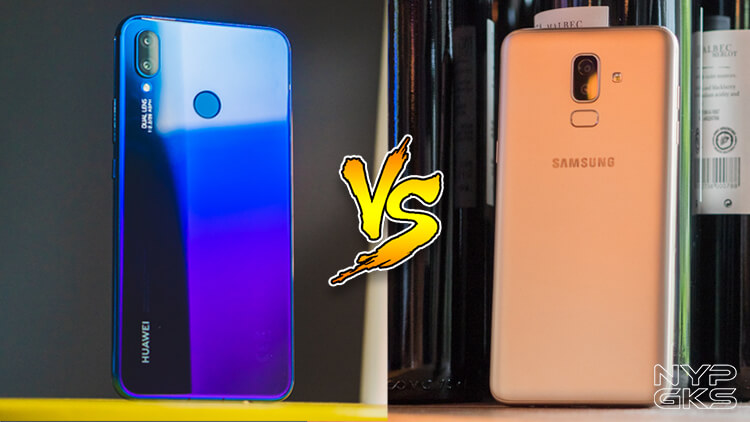 We are already in the midst of 2018. This is the season where a lot of smartphone companies are launching the follow-up to their last year’s midrange models. And at this moment, Huawei and Samsung are at the forefront of this movement.

Just the other day, the two brands almost simultaneously launched new devices here in the Philippines. Huawei made a big splash when they announced the Nova 3i, a device that aims to follow the footsteps of the well-celebrated Nova 2i.

At the same exact day, Samsung held a press launch for the Galaxy J8. This new addition to the J-series is their most interesting midrange device yet. And since it’s coming from an equally prominent brand, this handset can easily go head-to-head with Huawei’s offering. Today, we’ll see which between the Huawei Nova 3i and the Samsung Galaxy J8 offers the best value for the price. Can the Nova 3i continue the momentum its predecessor set for Huawei? Or will the Galaxy J8 steal the spotlight from them?

Check out our Huawei Nova 3i versus Samsung Galaxy J8 specifications and features comparison to see which between these two devices is the right one for you. I think it’s really obvious who’s the winner here. While both the Huawei Nova 3i and the Samsung Galaxy J8 are priced exactly the same, it’s evident that Huawei’s smartphone takes home the win in this comparison.

As you can see, the Nova 3i’s processor looks much more appealing than the Galaxy J8’s. Huawei used their new 2.2 GHz Kirin 710 octa-core chipset, which is said to be the new processor that will be powering Huawei’s future midrange devices.

On the other hand, Samsung only used a Qualcomm Snapdragon 450 octa-core processor for the Galaxy J8 — a really disappointing move from the South Korean company as we typically see Snapdragon 400-series chipsets running on smartphones under Php10,000. Moreover, the Huawei Nova 3i brags a bigger 128GB of internal storage, which is twice as much as the capacity on the Samsung Galaxy J8.

The 6.3-inch FHD+ IPS panel found on the Nova 3i is unquestionably better than the smaller and lower-resolution 6-inch HD+ screen of the Galaxy J8. Well, not unless you’re really a big fan of Samsung’s vibrant Super AMOLED display. To continue its winning streak, the Huawei Nova 3i also sports a killer set of cameras. This thing comes with four cameras just like its predecessor. There’s a 24-megapixel selfie-taker on the front, while at the back you can spot a 16-megapixel shooter. Both are partnered with a 2-megapixel camera for depth-sensing. So if this comparison made you want to get the Nova 3i, you can now pre-order it through Lazada. The device is priced at Php15,990 and Huawei will be giving away a free Bluetooth speaker worth Php2,990 for those who will reserve their units.

But if you still want to go with the Samsung Galaxy J8, the device is also available for pre-order starting July 21 for the same price of Php15,990. If you pre-order the device, you’re subjected to a free screen protection insurance and a JBL Clip 2 wireless speaker, amounting to a total of Php3,500 worth of freebies.