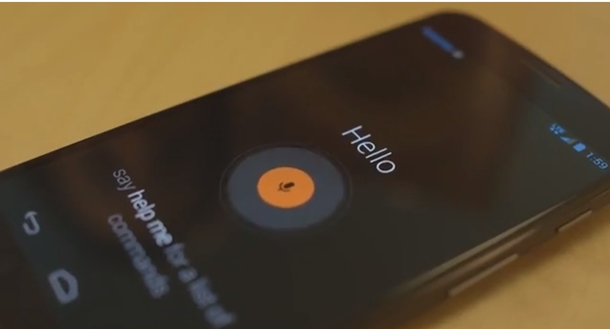 The much talked about Motorola X Phone finally graced an official promotional video to confirm its existence and design. The video was from a Canadian carrier Rogers and I guess that’s all we need to confirm it.

But as always, an official announcement from Google and Motorola will be very much appreciated. Besides, there’s no mention of the specs so we still have to wait for some time.

The X Phone will feature an always-on voice control and hands-free feature so that it can be recognize commands easily. The user will simply say “Okay, Google Now” then he/she can now issue a command which the phone will follow. it. Google Now is the answer to Apple‘s Siri and it’s great to see that they are really  working hard to fight for the throne. The hands-free voice command feature is nice, but it could possibly be a big battery drainer so it’s interesting how they would address that. It’s also worth noting that they’ve highlighted the camera and it comes with a new app though we’re not sure if it will be the official for Android 4.3 or it’ll be exclusive for the Moto X Phone. It can quickly launch the camera just by doing some shaking.  It is also rumored that Motorola will incorporate a ClearPixel technology so we’re really excited to see how that tech turns out. This technology was actually patented by Kodak way back in 2005, but this is the first time that it will be used on a smartphone. Can it compete with the Nokia Lumia 1020‘s camera?

UPDATE: The video was now set to private on YouTube as requested by Rogers. I watched it for 5 times then it went private. Oh well, at least we have the screenshots?

The video mentioned that it will be available on Rogers this August in either Black and White. Hopefully, the launch for other countries will shortly follow.