The MyPhone A878 Duo quickly captured the attention of the Philippine market when it first came out because of its impressive specs despite the modest price tag. After all, whoever heard of a dual core android smartphone with a gorgeous 4.3″ IPS display retailing for anything less than Php10k? But that’s just what the A878 Duo did, giving budget-conscious Filipinos the opportunity to own a blazing fast Android smartphone for just Php6,999. It even comes with ICS 4.0 out of the box! However, the MyPhone A878 Duo doesn’t come with 3G or a front-facing camera for that matter, and many potential buyers have held out on buying it in hopes that MyPhone would release another dual core model that supported 3G. That phone is now here in the form of the much-awaited MyPhone A898 Duo, filling in the gaps of what the A878 Duo should have been. 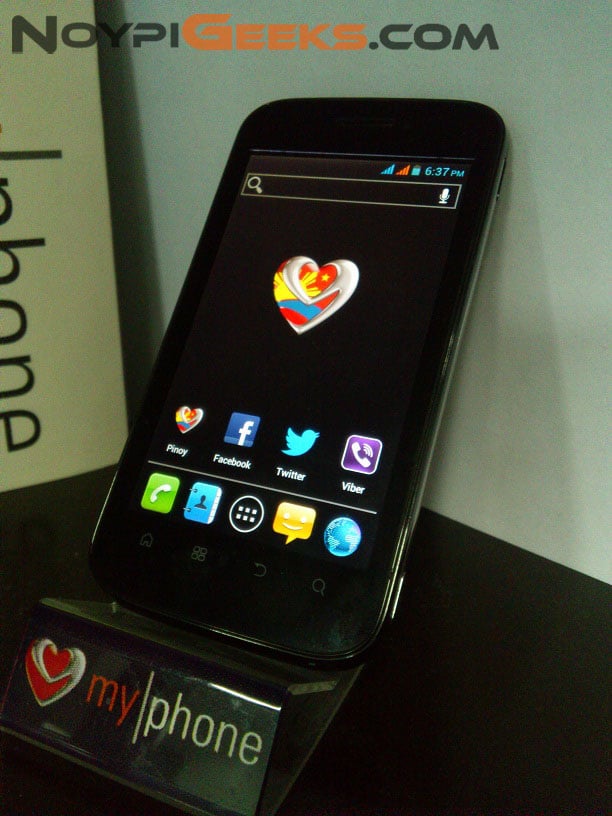 The thing that immediately catches your attention about the MyPhone A898 Duo is that it comes with a 1GHz dual core CPU despite its affordable price. After all, it wasn’t too long ago that many of the flagship handsets that were coming out all had a dual core chipset. The CPU in question is the MediaTek MT6577, which is a fairly recent processor, albeit aimed at entry and mid-level handsets. It’s coupled with a capable PowerVR SGX531 GPU so you can enjoy even the most system intensive games on the MyPhone A898 Duo. Add to that 512Mb of RAM, and you have a surprisingly powerful Android smartphone that can handle a decent amount of multitasking.

The OS: ICS Goodness Out of the Box

One of the things I immediately liked about the MyPhone A898 Duo is that it launches with Ice Cream Sandwich 4.0 straight out of the box. Sure it isn’t quite the buttery smoothness of Jelly Bean, but at least it isn’t Gingerbread, which has been out in the market for a couple of years now. ICS 4.0 builds on the stability of Gingerbread 2.3 and the functionality of Honeycomb 3.0, all while adding a few optimizations along the way.

I also like that MyPhone hasn’t heavily customized the ICS UI. For example, Samsung’s TouchWiz and HTC’s Sense are pretty and functional, but they are incredibly bloated and eat much more RAM, and most of that added functionality has already been included in stock ICS anyway. MyPhone’s take on ICS just involves a few modifications to the notification area and settings to include dual-SIM functionality, not to mention the icon set and some wallpapers, and that’s it.

There has been a lot of optimization from Gingerbread and Honeycomb to ICS, but one last thing I particularly like about ICS is improved website rendering. If you’ve used a Gingerbread handset or Honeycomb tablet in the past, you’ll likely have encountered the familiar gray and white “patchwork” that happens when the browser is too slow to render the webpage while you are scrolling through it. I doubt you’ll be seeing that minor annoyance anymore, especially when you couple that optimization with a powerful dual core CPU like the one on the MyPhone A898 Duo.

The Screen: Wide Angles? No Problem

The MyPhone A898 Duo comes with the same 4.3″ capacitive IPS display as the one on the A878 Duo with a resolution of 480 x 800. That resolution should give it a pixel density of 216PPI, which is more than decent on a budget phone. You’ll be able to enjoy watching movies and playing games with significantly better detail than your average Galaxy Y. A bigger screen also comes with other benefits, such as being able to compose text messages and emails on the onscreen QWERTY keyboard more comfortably, even when in portrait mode. If you’ve ever tried typing in portrait mode on a 3.5″ or smaller screen, you’ll know what I’m talking about.

Also, it’s an IPS display, which is much better at reproducing accurate colors over conventional TFT LCDs. IPS displays have better viewing angles as well, meaning the color shift that you experience when you look at the screen from off-center is significantly reduced. The tradeoff is that IPS screens consume slightly more power. Thankfully, the MyPhone A898 Duo comes with a 1,800mAh battery, which should be more than enough to compensate.

One of the things that left me wanting about the MyPhone A878 Duo was that it didn’t have a secondary front-facing camera for things like video calls and quick self-portraits. Thankfully, the MyPhone A898 Duo addresses that particular shortcoming with a VGA front-facing snapper. Sure, its just a VGA unit, but it would be rare that you would need more out of a secondary camera anyway, and for video calls, the quality should suffice.

Like the A878 Duo, the MyPhone A898 Duo comes with a 5mp autofocus primary camera coupled with a dual LED flash. It has a decent sensor that takes some surprisingly good photos in normal outdoor and indoor lighting, while the dual LED flash should make short work of those shots where there is less than optimal lighting. It doesn’t do well when the background is kind of busy with lots of movement, but for the price, there’s such a thing as asking for too much.

The camera app comes with some tricks up its sleeve too. It has a smile shot capture mode that enables the MyPhone A898 Duo to avoid capturing a shot when the subject isn’t smiling, and there’s face detection too. There’s also a continuous shot mode that can take up to 16 quick shots in succession, which is great for those “jump shots” a lot of people are into these days.

As I mentioned earlier, I was a bit letdown by the MyPhone A878 Duo because it didn’t have 3G. Not so with the MyPhone A898 Duo, which comes complete with HSUPA, HSDPA, GPRS and EDGE. There’s also GPS with aGPS for those who would like to use their phones as their car’s GPS navigation system., or perhaps for fitness enthusiasts who can download a running app to track their route and distance covered. Then there’s Bluetooth for those quick file transfers or if you want to pair your MyPhone A898 Duo with something like a Bluetooth headset. Finally, there’s FM in case you get tired of your MP3 collection.

The thing about most budget Android smartphones is they come with dinky internal storage, and sometimes it’ll only be reserved for app installations. Not so with the MyPhone A898 Duo as you’ll get 4Gb of internal storage so you have much more space to install apps and can even take a decently-sized MP3 library that you’ll only have to refresh every one or two weeks. Of course, do take note that the amount of user-accessible storage is only limited to 2.56Gb since the OS and ROM will be eating up a chunk of that. Thankfully, you can expand it via MicroSD up to 32Gb.

The MyPhone A898 Duo comes with a 1,800mAh battery to power everything up. In comparison, the Galaxy S2, which was the best dual core smartphone of its time, only had a 1,650mAh battery. The MyPhone A898 Duo’s CPU won’t take as much of a toll on battery life because of the lower clock speed, and having a larger capacity battery, overall battery life should be better than a day of normal usage for calls, texts and occasional browsing over WiFi and 3G. Official estimates are 1,103 minutes for talk time and 256.6 minutes on standby.

Conclusion: A Solid Mid/High-Range Phone That’s Worth More than its Asking Price

At Php7,499, it’s hard not to justify buying the MyPhone A898 Duo if you can afford it, and at that price, I can guarantee that a lot of Filipinos will be able to afford it. Not only does it bring everything to the table that the A878 Duo did, but it also addresses any shortcomings of its little brother by adding 3G support and a front-facing camera. And have you seen that 4.3″ IPS screen while playing videos and games? It’s gorgeous!

There has been a lot of buzz around the release of the A898 Duo, and just the other day, MyPhone announced on its Facebook page that it will retail for Php7,499. That’s just Php500 more than the SRP of the MyPhone A878 Duo! It is now officially available in all MyPhone stores nationwide.