Just last month, Cherry Mobile dropped the price of its dual core Android phone, the Magnum 2X, down to Php8,999 while MyPhone released their own new dual-core phone, the A878 Duo, at Php6,999. Both these phones are currently the top phones among Cherry Mobile and MyPhone’s respective Android lineups so it’s hard not to instantly want to compare them with each other. It also doesn’t hurt that they both retail within roughly the same price range in the sub-10K category. The MyPhone A878 Duo might be the newer model of the two, but does newer necessarily mean better in this case? Read on as we compare key specifications between these two local powerhouses. 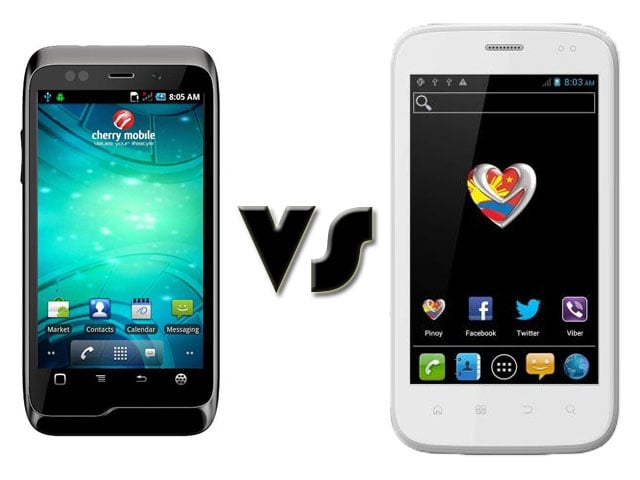 The Cherry Mobile Magnum 2X has actually been around for quite some time, having been released in October of last year. While it originally launched with Froyo 2.2, it now runs Gingerbread 2.3 out of the box. This might disappoint those who want all of the optimizations and added features of the more recent Ice Cream Sandwich 4.0, however to be fair, Gingerbread is quite stable. Those who owned the Magnum 2X’s predecessor, the Magnum HD, will note that many of the force close issues that plagued the phone disappeared soon after upgrading to Gingerbread. 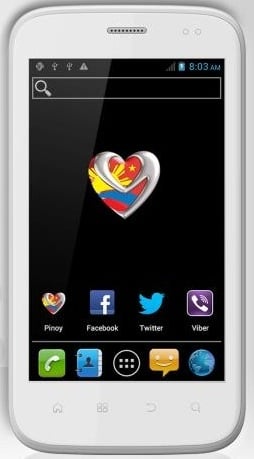 Being a fresh release, the MyPhone A878 Duo launches with ICS 4.0 right out of the box. Sure, Jelly Bean 4.1is already out, but it’s really more of an incremental upgrade over ICS than a complete overhaul the way ICS was over Gingerbread. Some of the key improvements in ICS include faster website rendering in the stock browser, resizable widgets, and decreased shot-to-shot lag and shutter exposure lag. Almost all of the new features on ICS bring a level of improvement to the usability and functionality of a phone, however it does come at a price.

Apps tend to use more RAM in ICS compared to Gingerbread, and ICS also forces the system to rely more on hardware acceleration for graphics, which improves things like games, internet browsing and video, but also helps to diminish the battery more quickly. Thankfully, the A878 Duo comes with a larger battery compared to the Magnum 2X, so it should easily provide the juice needed for the more power-hungry OS. Gingerbread might be light and stable, but you’ll lose out on a ton of functionality you’ll wish you had.

The CPU: Battle of the Dual Cores

The Cherry Mobile Magnum 2X and the MyPhone A878 Duo are both powered by dual core 1GHz CPUs and are coupled with 512Mb of RAM. Because the Magnum 2X runs on Gingerbread and both phones run fairly the same CPU and RAM configuration, it would be easy to assume that the MyPhone A878 Duo and its MediaTek MT6517 CPU have a slight edge. In most cases, that would be true, but the Magnum 2X sports an Nvidia Tegra 2 CPU, which is optimized for games and video. Not only should some games run better on the Magnum 2X, but there are also Tegra-optimized games that really take advantage of the Tegra 2’s hardware – and some of them are even exclusive to Tegra-only phones. 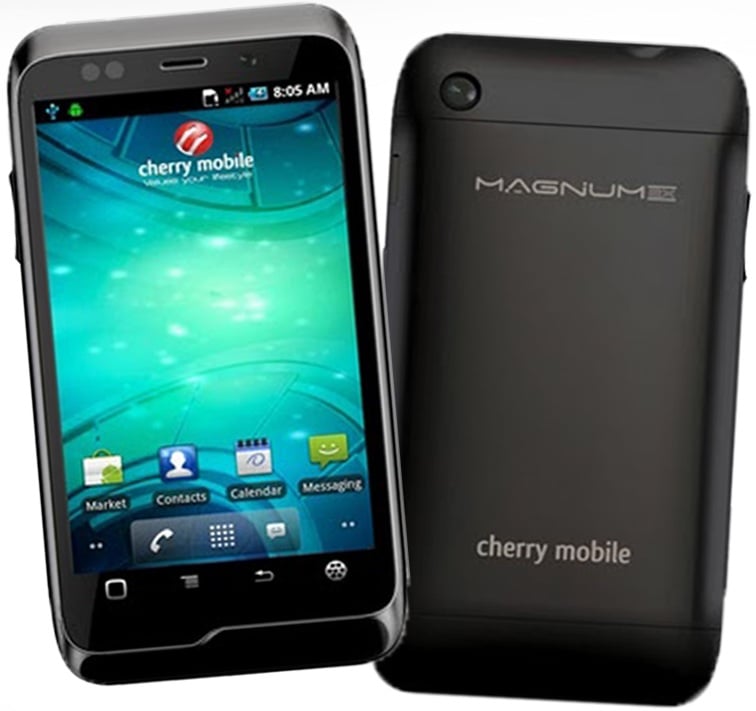 The Tegra 2 chip on the Magnum 2X might appeal more to avid gamers, especially because of those Tegra-exclusive games, but if you don’t really play a lot of graphics intensive 3D games, the MT6517 is no slouch.

The Screen: Because Bigger is Better

The Magnum 2X sports a 3.8 inch capacitive touchscreen with a resolution of 480 x 800 with gorilla glass. The screen is larger than the iPhone’s, but not by much. By today’s standards, this is considered quite small, especially with plenty of the top Android handsets coming with 4 inch screens or larger.

On the other hand, the A878 Duo has a comfortably large 4.3 inch IPS touchscreen display and also with a resolution of 480 x 800. If you aren’t aware, IPS (in-plane switching) displays are a superior display technology over conventional TFT LCDs because they have wider viewing angles and better color reproduction. However images won’t be as sharp on the A878 Duo’s screen as those on the Magnum 2X because despite having the same resolution, those pixels have to be distributed over a wider area.

Still, bigger is definitely better, and because the A878 Duo’s screen is larger than on the Magnum 2X, you won’t have to hold it as close to your face to read what’s on it. This means that the actual perceivable sharpness will be about the same. You’ll be able to better appreciate things like games, videos, and internet browsing, and you’ll even have a better experience while messaging since the onscreen keyboard will also be much larger.

The Camera: Are 2 Cameras Better Than One? 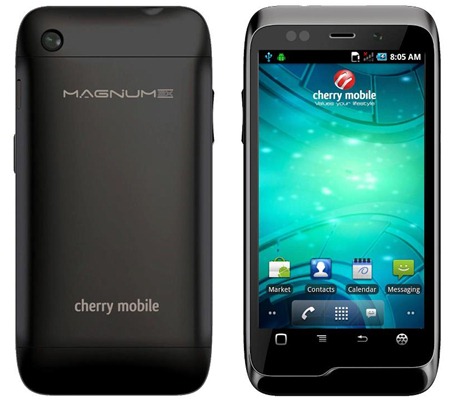 On the other hand, the MyPhone A878 Duo comes with a 5mp autofocus rear-facing shooter coupled with an LED flash. This solves the problem of taking low-light shots, but if you want to make video calls, the person at the other end will not be able to see you.

It would really depend on your preferences, but I would take a front-facing camera over an LED flash anytime because of that extra functionality. I’ve never been able to take a good low-light image in my life anyway.

Both phones come with a slew of wireless connectivity options. Both of them have Bluetooth, WiFi and GPS. However they do differ in one key area: network data connectivity. The A878 can only surf at up to EDGE speeds if you use a mobile network to browse the internet on your phone. On the other hand, the Magnum 2X supports 3G speeds. Certainly a deal breaker if you prioritize fast surfing speeds on your phone.

Internal Storage: Take Your Music Library With You!

If you’re the type who likes to take their entire music library along, the Magnum 2X should appeal to you. It has 8GB of internal storage, which is more than enough to store your favorite albums along with a few full-length movies. You can also expand storage up to 32GB via MicroSD.

In comparison, the A878 Duo only comes with 4GB of storage. This is spacious enough for a chunk of your favorite albums, but it won’t be long until you’ll want more. Thankfully, it’s also expandable via MicroSD up to 32GB.

Battery Life: Your Charger is Your Best Friend 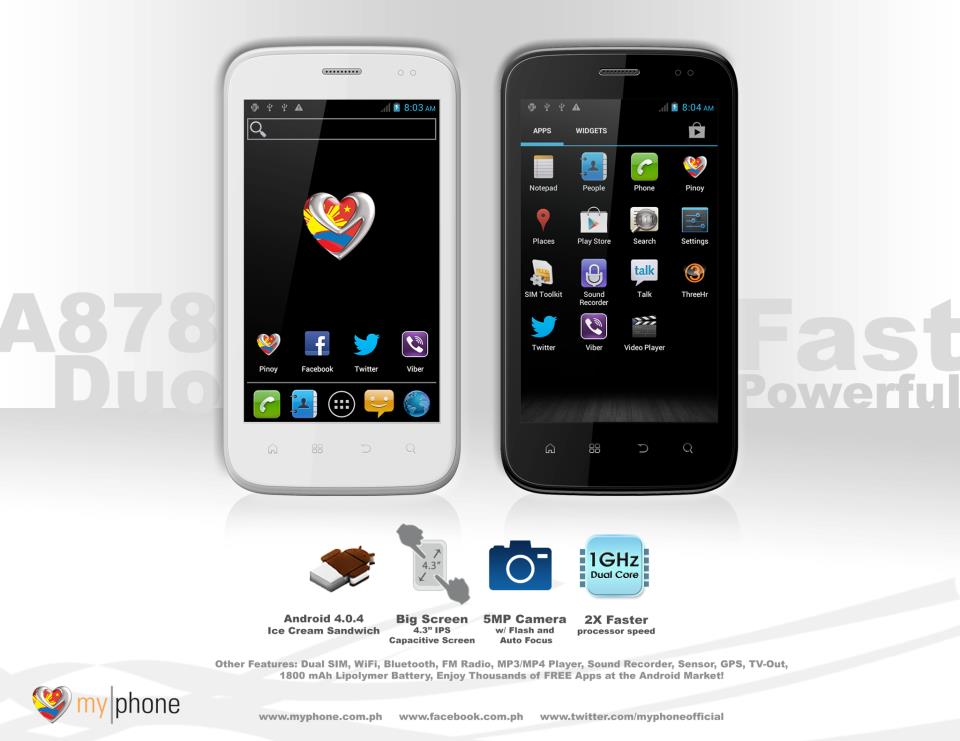 These are dual core phones we’re talking about, so don’t expect the battery to last for more than a day and half. The Magnum 2X comes with a 1,500mAh battery while the A878 Duo comes with a 1,800mAh unit. However despite that small advantage in capacity by the A878 Duo, the larger screen and slightly more power-hungry ICS will diminish the battery at a faster rate. In real life, the actual battery life of both phones should be about equal.

Despite being in the market for quite a while, the Magnum 2X still has a lot to offer, and it has everything going for it except for the outdated OS version, smallish screen, and the slightly more expensive price tag of Php8,999. However, I would call it the more complete phone, simply because it supports 3G browsing. Being the newer flagship of the two, it’s no surprise that the A878 Duo kicks butt in almost every key specification. However, the lack of 3G browsing speeds is a rather big compromise just to keep the price low at Php6,999. If you don’t mind being limited to 2G speeds and only using WiFi, I would have no problems recommending the A878 Duo over the Magnum 2X. But if browsing at 3G speeds is important to you, then that’s the only reason I would recommend the Magnum 2X over the A878 Duo.