The company has long been criticized for pricing their products a tad higher than the competition, but it seems like they’re now moving onto the right route. With the EVO 4G, the company has officially entered the LTE smartphone game.

O+ EVO 4G is powered by an unknown 64-bit 1.5GHz quad-core processor and Android 4.4 Kitkat. 8-megapixel and 2-megapixel cameras are in charge for photography needs. The handset also features a Network Switch, which lets the user swap SIM1 network to SIM2 and vice versa. This means that you can easily switch LTE from 2 different networks, if you have a data plan or registered to a surfing promo. 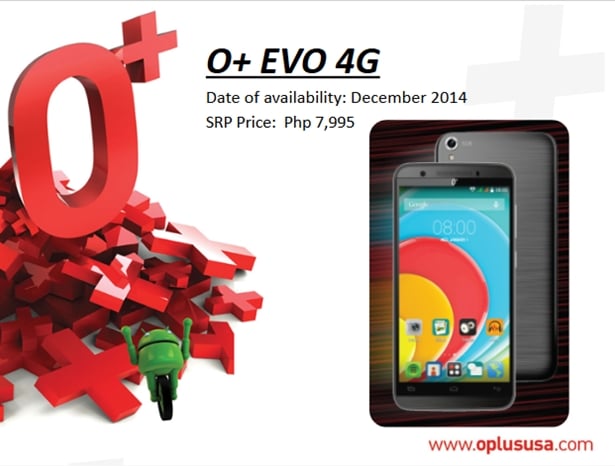 There is no mention of RAM capacity, SoC, and GPU. But considering O Plus‘ previous efforts, we suspect that it has 1GB of RAM, MediaTek MT6732, and Mali-T670 GPU. The specification of the processor perfectly matches the MT6732, so I assume it’s the same. Anyway, we’ve already inquired about this and we’ll update this post once we get confirmation.

The O+ EVO 4G is now available on all O+ stores, kiosks, and retailers nationwide for only Php7,995.