Midrange smartphones have found their true home here in the Philippines. So much so that this category has inevitably been divided into two. There’s the more expensive one, which ranges from around Php15k to Php20k. Then there’s the slightly more affordable group, which is just south of the Php15k mark.

What we are taking a look now is the OPPO F5 Youth, the slightly cheaper counterpart of the OPPO F5. And for a relatively cheaper price, is the F5 Youth a more appropriate buy? Or are you better off looking somewhere else or spending a few thousand pesos more for the F5? That’s what we are going to figure out in our full review.

The OPPO F5 Youth carried the design of the F5. They even have the same 6-inch display, so you can’t have their sizes as the differentiating factor. But still, both of their designs are a bit refreshing, especially when compared to their predecessors.

Probably the biggest contributor to this design change is their 18:9 aspect ratio screen. As you can see, the display now populates almost the entire screen — only leaving a small portion on top to house the earpiece, selfie camera, and all the necessary sensors. 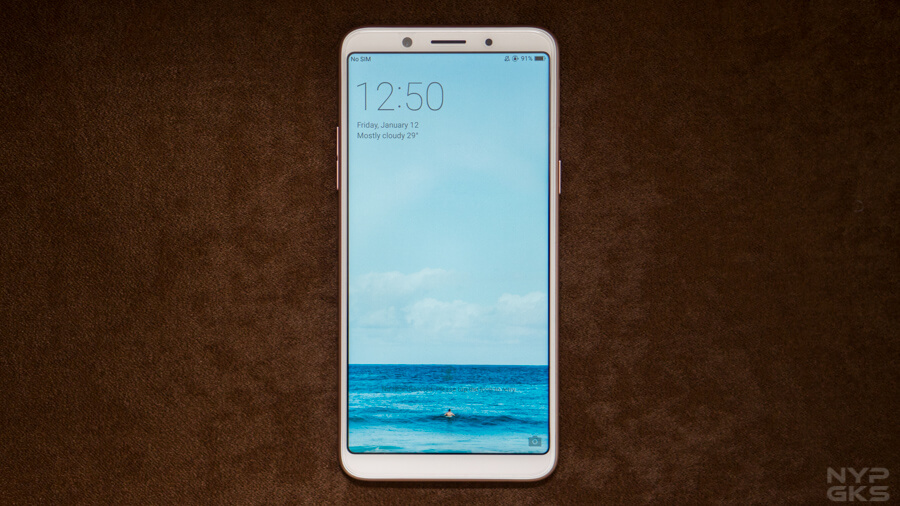 The capacitive buttons have been replaced by on-screen ones, while the fingerprint scanner was relocated to the back. Personally, I find it easier to reach compared to when it’s embedded within the physical home button.

The only physical buttons we have here on the OPPO F5 Youth are the lock/power switch and volume controls which are located on the left and right sides, respectively. The buttons are really thin but they offer good tactility when pressed. 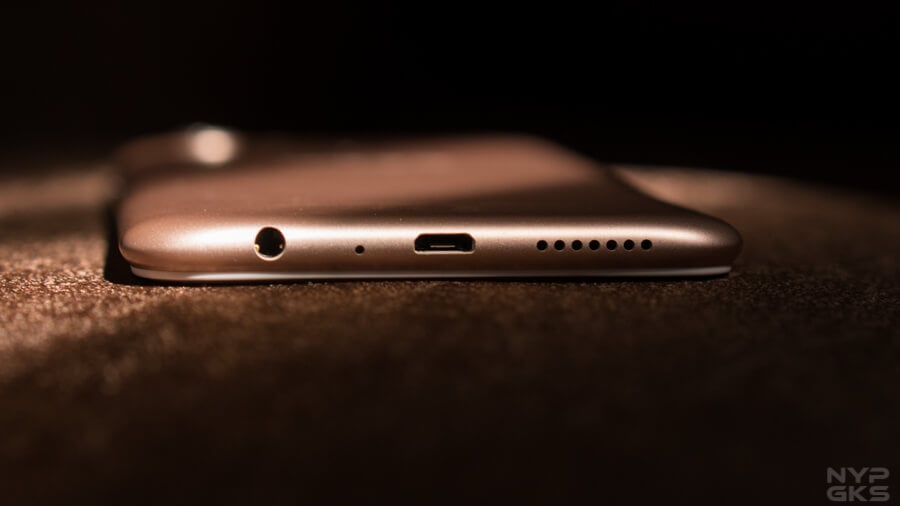 At the bottom, we have the micro USB port, a built-in microphone, and the 3.5mm headphone jack. There’s also the loudspeakers. The sound feels a bit muffled, but the volume is decently loud.

Just like the standard F5, the OPPO F5 Youth is only made of plastic. On the bright side, it has that metallic look to it. So you’re getting that premium look, without the heavy weight that you’d get in other premium smartphones. 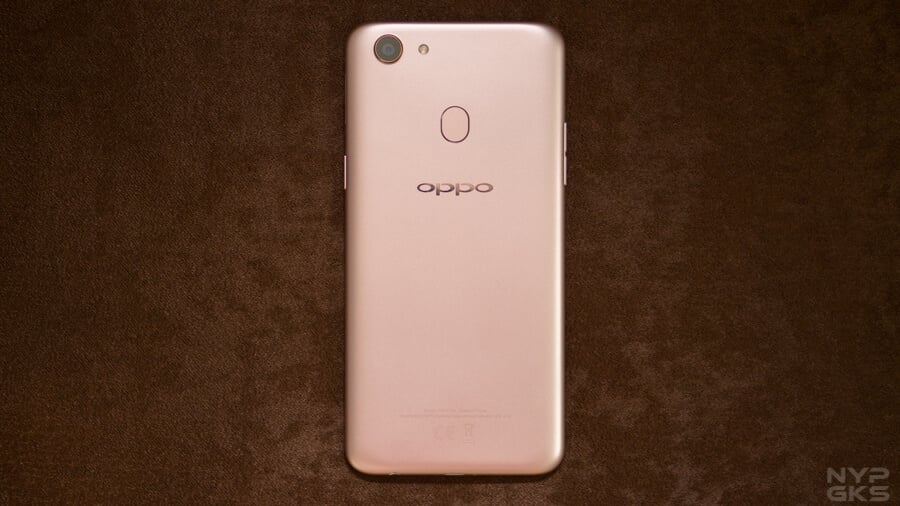 Also, despite its large 6-inch screen, the F5 Youth feels surprisingly compact. This is due to its impressive screen-to-body ratio, made possible by its ultra-thin bezels. 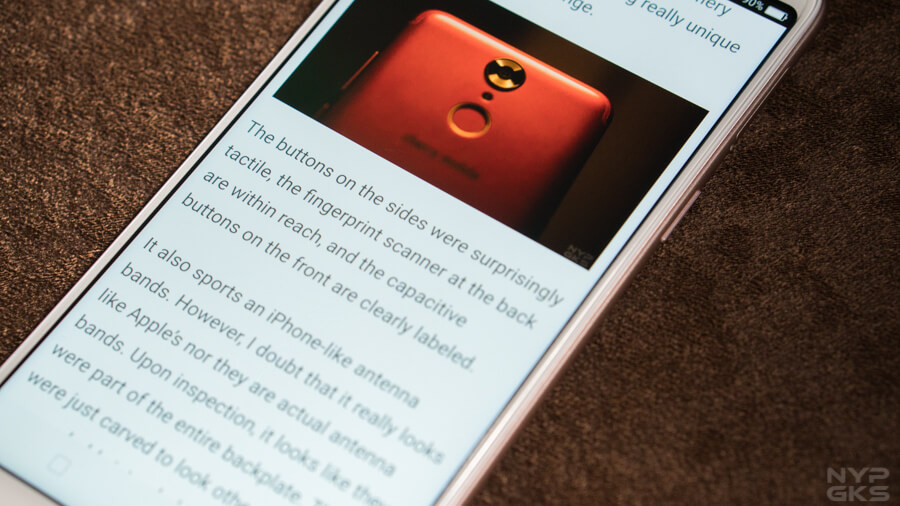 Size wise, the screen is large enough to make gaming really immersive. It’s also perfect for watching videos and other forms of entertainment. And thanks to its 18:9 aspect ratio, you can read almost an entire webpage without having to scroll too much.

Its sharp Full HD+ resolution also makes reading texts a breeze in the eyes. The screen also delivers decent colors as well. It might not be as contrasty and as vibrant as what OLED screen offers, but for an IPS screen, I have no complaints at all.

Powering the OPPO F5 Youth is a 2.5GHz MediaTek Helio P23 octa-core processor, with 3GB of RAM, and 32GB of expandable storage.

Clearly, it doesn’t have the fastest chipset in the world and it really shows. You can feel its frailty when your flicking through your Facebook or Instagram news feeds for an extended period of time. It’s also noticeable when you’re just running around the interface, or when you’re opening an app which takes a split second or two. 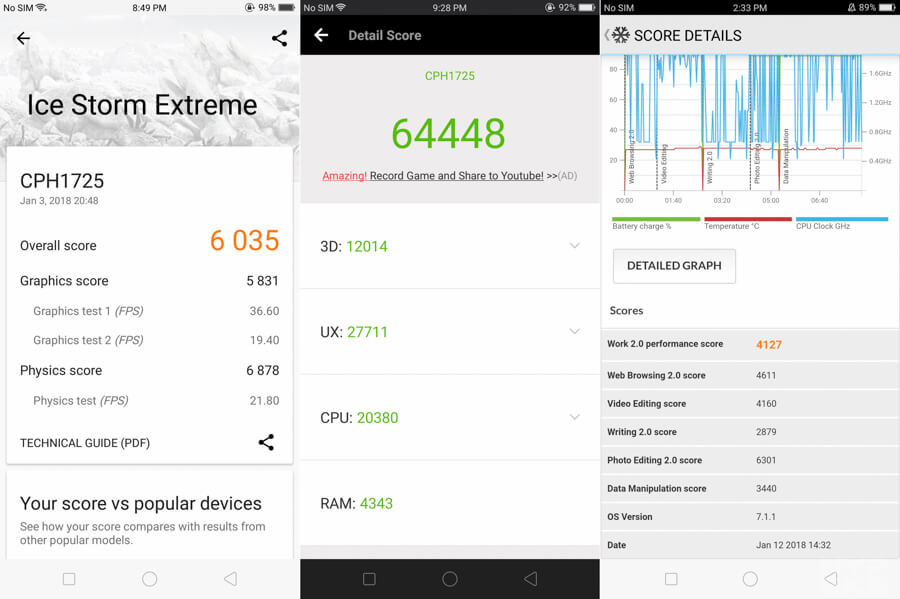 On the upside, it seems like the RAM can help you switch between apps almost instantly. Also, games like Rules of Survival ran at playable frame rates. Its widescreen also benefits you from having an additional room for the on-screen controls, without blocking the game’s field-of-view.

As I stated earlier, OPPO has migrated the fingerprint scanner at the back of the F5 line. But despite the change, it’s still the same, ultra-fast and accurate sensor that we saw on their previous devices. 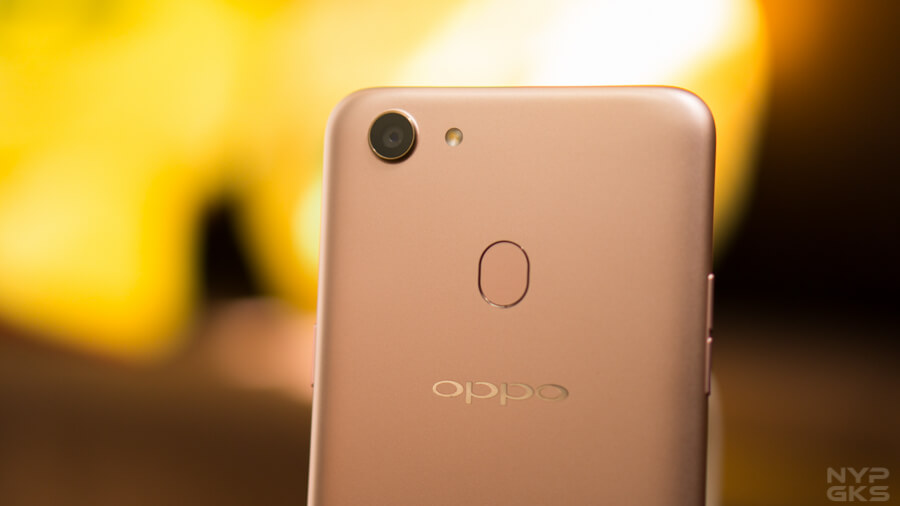 The OPPO F5 Youth also has a facial recognition security feature. And despite not having the complex sensors that the iPhone X has, it still works impressively well. It was able to recognize my face with or without my eyeglasses on, or even when I’m wearing a cap.

The facial recognition feature was also incredibly fast that you wouldn’t be able to see the lock screen at all.

But since it only uses the front camera and it doesn’t have the required sensors, it doesn’t work well in pitch black rooms. However, often times, the light emitted from the screen is usually enough to make the sensor recognize the face and unlock the handset.

Just like its brothers, the OPPO F5 Youth runs on Android 7.1 Nougat. As disappointing as it may sound, we’ll just leave it to OPPO to hopefully come up with an Android Oreo update for this one.

Right on top of Android Nougat is OPPO’s own ColorOS 3.2 interface. This new version was tailored for the users to fully maximize the screen’s potential, plus provides new and more intuitive ways for you to control and interact with the device.

The lock screen looks fairly clean, the command center at the bottom is within reach, and the notification tab clearly needs some cleaning. Fortunately, it’s something that can be easily addressed with a simple software update.

As usual, there’s no app drawer on this handset so all your apps are laid out on the home screen — all within reach when you need them. It goes without saying that ColorOS have always got a lot of inspiration from iOS.

But on the good side, OPPO didn’t preinstall the device with a lot of bloatware and redundant apps. This means that you’re only getting one camera app, gallery, dialer, and messaging app.

Other worth noting features include the Clone App, which makes two copies of a selected app for easy multi-account management. Game acceleration, Split screen mode, and different gesture and motion controls are also good to have. 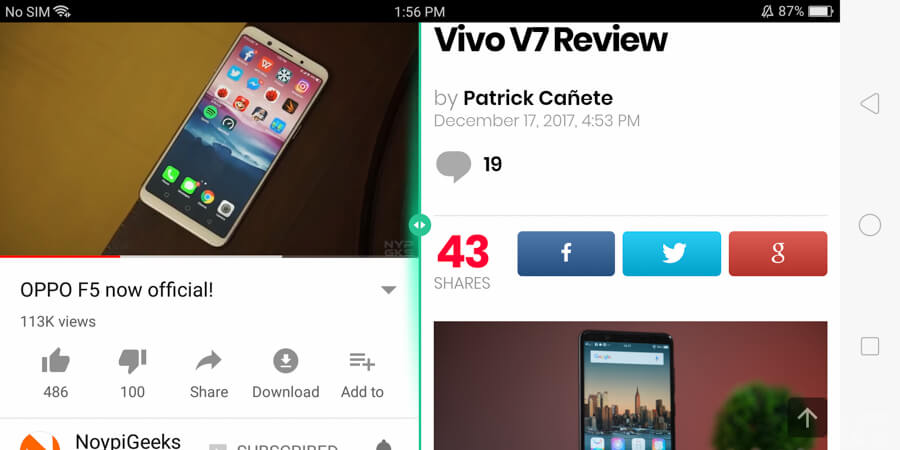 This is where the OPPO F5 Youth clearly shines. It’s equipped with a 16-megapixel front camera and a 13-megapixel shooter at the back. It might not have a higher resolution sensor than the F5, but it still managed to retain the AI Beauty mode feature — one of the most prominent advancements on the new generation F-series.

As expected, the selfie camera can take pleasing shots. The images have acceptable colors, the contrast might not be the best, but setting the exposure right can easily straighten it up. The sharpness is just decent as it appears a little smoother when zoomed in.

The AI-powered beauty mode of the OPPO F5 Youth also worked like a charm, although I suggest you use the Auto mode so it wouldn’t look all too synthetic. The blemishes were lessened, eyes look a bit symmetrical, and the jaws are more pronounced.

On the other hand, the 13-megapixel primary camera delivered surprisingly good results. The details looked sharp, even though the pictures were taken indoors. The contrast and saturation blend well together, although the dynamic range could have been better.

The camera can also take 720p and 1080p videos. It’s good for taking casual videos or if you’re just starting a video channel, but if you’re a professional, there are other better alternatives out there. The quality is nice and it’s good enough to be shared on social media.

I’m always impressed with the battery performance of OPPO devices and that’s pretty much the same case with the OPPO F5 Youth. Its 3,200mAh battery capacity might not be the most ideal on paper, but the longevity it delivers is just excellent.

I can confidently use the device throughout the day without having to worry that it would die on me before the day ends. After a whole day of browsing the internet via 4G LTE and WiFi, sending and receiving SMS, and streaming music via Spotify to a Bluetooth speaker, the OPPO F5 Youth still left me with around 28% of charge at night. 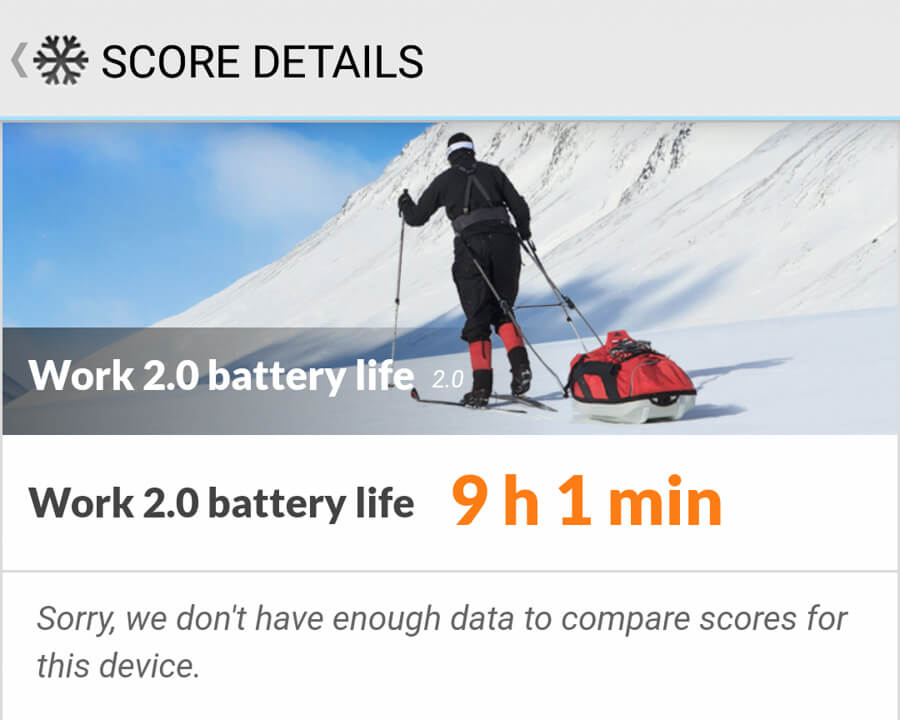 I also ran PCMark’s battery test, and the device had a score of around 9 hours of screen-on time. For a perspective, the average score we got on our previous review units was 7 hours.

And based on my testing, I didn’t encounter any problems with all of its antennas. The call quality is also good, although it looks like it doesn’t have a noise-canceling microphone as the other end of the line is sometimes complaining of noise in the background.

Lastly, it looks like OPPO is not yet ready to give up the microUSB. It might not be futureproofed, but considering that a lot of people probably have a lot of micro USB cables lying around the house, I think this is the safest bet in case the included cable goes missing or broken.

So, is the OPPO F5 Youth a worthy alternative to the F5? The answer would be an absolute yes. But, is it the best device in its category? Well, that’s debatable.

But still, there are a lot of things to like about the OPPO F5 Youth. For one, the design. Despite being a bit of a cliche, the device’s look feels elegant and minimalistic. Not to mention that it also feels sturdy, despite having a plastic cover on the back.

Its large and sharp screen is also a pleasure to look at. And if you’re all about taking pictures (especially selfies) all day, its impressive set of cameras and long battery life is there at your service. 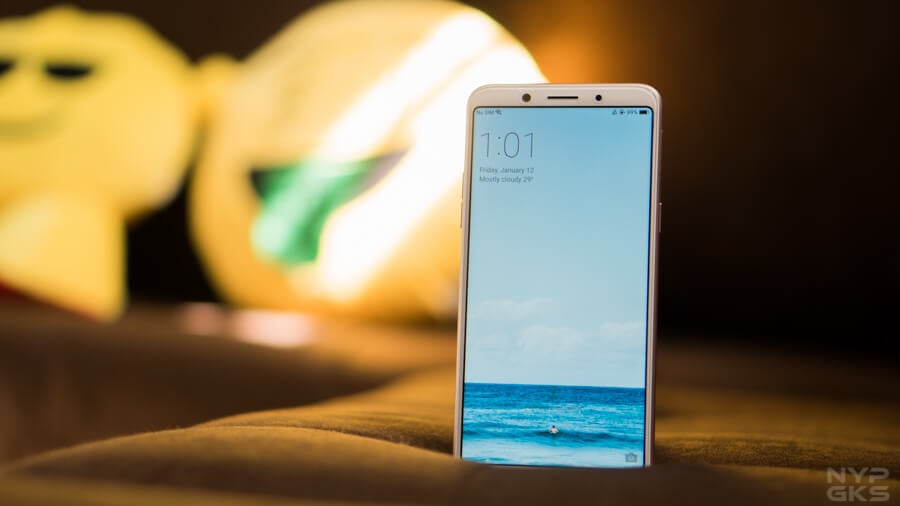 However, I’m not quite impressed with its performance. Sure, it can run pretty much all the games you throw at it. But for some reason, browsing through different social media apps feels slow. Unfortunately, it’s the apps that a lot of users spend most of their time on. This issue can be possibly addressed by a software update so hopefully, OPPO sends one soon.

To wrap it up, if you’re looking for a stylish phone with a good pair of cameras, long battery life, and a large screen, then the OPPO F5 Youth should be on your list.

But, if you’re a power user or an enthusiast who values performance and software features first, then, there are clearly a lot of alternatives out there.

Pricing and Availability of the OPPO F5 Youth

As of writing this review, the OPPO F5 Youth’s price has dropped to Php12,990 from its original SRP of Php13,990. You can also get it at a 6-month 0% installment plans via Home Credit.

Alternatively, you can check out the Vivo V7. The F5 Youth’s price drop made it in line with the V7’s Php12,990 SRP. OPPO’s bet might have a more appealing set of features overall, but the V7’s better selfie camera, Snapdragon processor, and 4GB of RAM might still make you want to consider the competition. Our advice? Check all of them personally and decide which one you like the most.