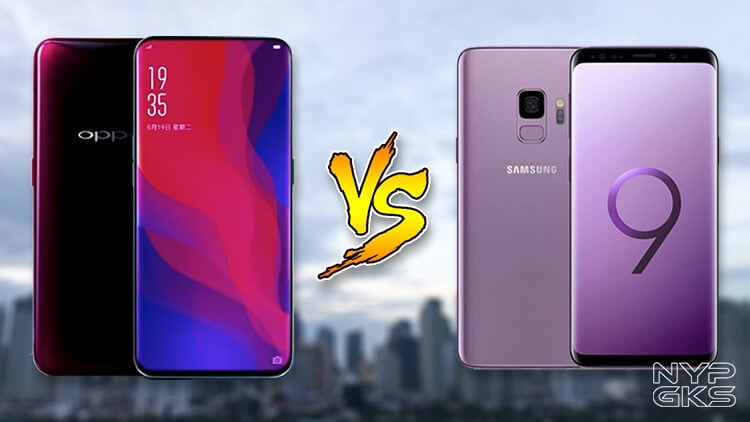 OPPO is making rounds in the news recently with their newest flagship smartphone — the OPPO Find X. This new smartphone is probably their most innovative and ambitious smartphone to date, so they really deserve all the attention they are getting now.

The OPPO Find X is packed with an interesting design and flagship specs — making it OPPO’s device that is more worthy to compete with the bigger dogs in the mobile industry.

One of the Find X’s main competitors is the Samsung Galaxy S9 — which is definitely one of the most prominent Android smartphones today. It is even hailed as the best-selling smartphone for the month of April — stealing the position from the iPhone X. Can OPPO’s imaginative new smartphone take on one of the biggest names in the Android space? Or will the Galaxy S9 stay as the king of the hill? Go ahead and check out our OPPO Find X versus Samsung Galaxy S9 specifications and features comparison to find out. Despite being released months earlier, the Samsung Galaxy S9 can still take on the new OPPO Find X. However, there’s no denying that OPPO’s latest flagship device has a lot of potential.

First, the Galaxy S9 has a better screen. Actually, it is pretty much the best display you can find on any smartphone today. It has a sharper QHD+ resolution and HDR 10 compatibility.

But that doesn’t mean that the display on the Find X is bad. In fact, it is the device’s best feature. It might not have the bells and whistles of the Galaxy S9, but its impressive 93.8% screen-to-body ratio is definitely a stunner. OPPO has also locked down the camera department with its pop-up setup.  It has a 25-megapixel selfie camera, while the latter only has an 8-megapixel camera. The Find X also has a 16-megapixel and 20-megapixel dual rear cameras.

The Galaxy S9 only has a single 12-megapixel camera, but based on previous reviews of the device — it is definitely one of the best smartphone cameras around. It can also shoot incredible slow-motion videos at 960fps. And speaking of the camera, another strength of the OPPO Find X is its pop-up camera feature. This allows the device to have a better screen-to-body ratio by hiding the cameras and only shows it up when needed via a motorized mechanism. It looks cool and it’s one of the reasons why it is the most imaginative smartphone today.

Both devices are equipped with flagship-level chipsets. However, most people might favor the Qualcomm Snapdragon 845 processor of the Find X rather than the Exynos 9810 chipset found on the Galaxy S9. The former also has a bigger 3,730mAh battery while the latter only has a 3,000mAh battery. On the upside, the Galaxy S9 does have wireless charging, something that OPPO wasn’t able to incorporate on the Find X.

Samsung’s offering also has stereo AKG speakers while the Find X only has a single loudspeaker and doesn’t have a headphone jack. The Galaxy S9 comes with IP68 certification, while the Find X doesn’t. Probably the most interesting part is, the Galaxy S9 is actually cheaper than the Find X — which is really surprising in this scenario. The OPPO Find X’s price starts at EUR999, which is around Php61,700 when directly converted to Philippine peso. On the other hand, the Samsung Galaxy S9 retails for a price of Php45,990 in the Philippines.

Without a doubt, there’s really a price to pay to get something that’s really new and fresh. To wrap it up, if you just want a proper flagship smartphone at a relatively reasonable price, then go with the Samsung Galaxy S9. But if you’re looking more than just the specs, and you find the new tricks of the Find X interesting, go ahead and wait for the arrival of the OPPO Find X.