Starmobile introduced a new low-end tablet – the Engage 7i+.

Probably what separates the Starmobile Engage 7i+ from other tablets is its call and text functionality. Tablets were never meant to replace smartphones, but it’s still a good feature to have – especially for having mobile data connectivity while on the move.

Starmobile Engage 7i+ features a 7-inch IPS screen with a resolution of only 1024 x 600. Digging down inside the device, there’s a 1GHz quad-core Intel Atom processor with 1.5GB of RAM and Mali-450 graphics. Surprisingly, it has 16GB out of the box which can store quite a number of apps and games. Those who need more can use a microSD card to expand it further.

There’s nothing really impressive here – just an affordable tablet. But it’s most likely enough to get the job done for most people. Don’t expect to play high-end games on this device, but rather treat it as a companion and entertainment player. 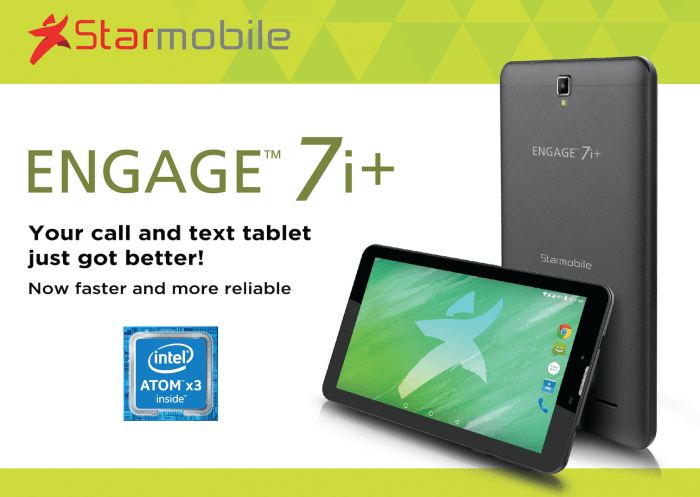 Speaking of entertainment, you can’t do much with it when your away from the charger. The 3000mAh battery will probably run out very quickly, so make sure to bring a charger or power bank when you’re going to use it for an extended period of time.

But all that is acceptable because of its low price. The Starmobile Engage 7i+ costs only Php3,990 and it will be available for purchase starting next week.