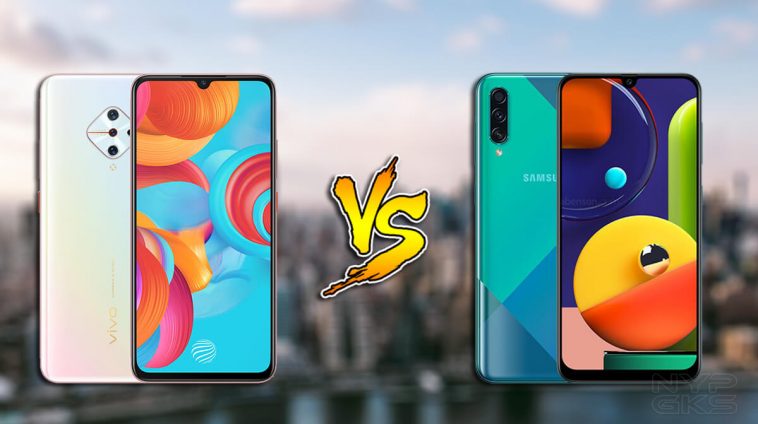 These days, a lot of mid-range phones are popping up with a decent performance to price ratio. Let’s start talking about the Vivo S1 Pro. The S1 Pro is an upgrade over the S1 and it sports a very unique design for its quad-camera set up at the back – along with a bigger size. Vivo’s main goal for this device is to offer its young customers a trendy way to express their own style.

The second phone in this comparison is the Samsung Galaxy A50s. Similarly to the Vivo S1 Pro, the Galaxy A50s is also a quick follow-up to a previous phone, the Galaxy A50. The A50s boast a newer chipset, better camera and also more stylish design. Which of the two mid-range phones would be the best choice for you? We’ll answer that question in our Vivo S1 Pro vs Samsung Galaxy A50s spec vomparison. Let’s get it started then! Clearly, you can see that both phones have a lot of differences and a few similarities. Their similarities include having Super AMOLED displays. Along with having a 6.38-inch and 6.40-inch display size for the Vivo S1 Pro and Samsung Galaxy A50s, respectively.

Other similarities include having an under-display fingerprint scanner, face unlock feature, Type-C USB Port and having a headphone jack. Performance-wise, the Vivo S1 Pro has a Qualcomm Snapdragon 665 chipset and an Adreno 610 GPU compared to the Samsung A50’s Exynos 9611 processor and its Mali G72 MP3 GPU. On paper, the two chipsets are fairly similar but the Snapdragon has a better and optimized GPU. Thus should make it the superior option out of the two. On the selfie camera aspect, both phones have a 32-megapixel front shooter. Clearly, the Vivo S1 Pro also wins this round.