Madfinger Games released their much-awaited follow-up to their highly praised Dead Trigger. Dead Trigger 2 picks up where the previous one left off, both in terms of gameplay and story. So, how does the sequel hold up?

The original Dead Trigger wasn’t The Walking Dead, but there’s enough story to help you play along. However, whereas the first game confined you to one city, Dead Trigger 2 went way big time by going global. You start out in the US, where your character is based. He’s now part of The Resistance, a global organization of survivors of the Zombie Apocalypse. Don’t get me wrong, the story is still as light as a feather. I doubt that you would mind, though, as you’d be too busy blasting zombies to smithereens. 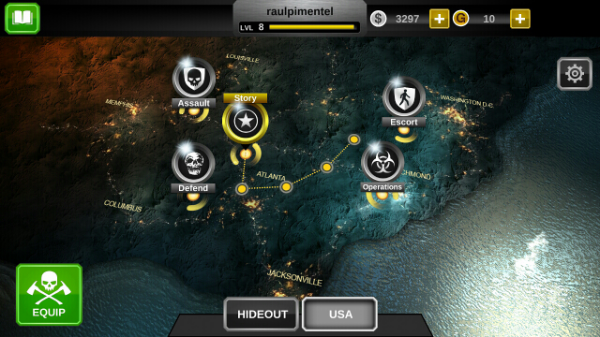 Too bad that the story doesn’t give you much background history about the characters.

Also, you now have allies on your fight for survival via 4 characters that provide you with the tools you need for your zombie massacre, given the right price, of course (more on that later). You have the Smuggler who will sell you boosters and stuff for gold; the Engineer who will sell you explosives such as frag grenades, mines, and rocket chicken – no joke, and it’s hilarious and awesome as it sounds, definitely one of the highlights of the game for me. The technician that while doesn’t sell you anything, is essential for improving money income and blueprints; the Gunsmith, where you get to buy and upgrade weapons; and the Medic who will sell you painkillers and such. Too bad that the story doesn’t give you much background history about them. They’re just there to siphon money from you, both in terms of real money and in-game currency. 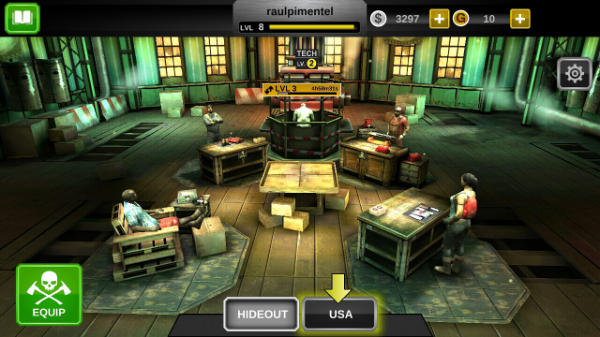 As far as mobile phones go, graphics of Dead Trigger 2 is superb. It’s optimized for Tegra devices, but even for those that employ other processors get a healthy dose of eye candy. Even budget phones, such as the Cherry Mobile Razor, Cosmos Z, and O+ 8.15 were able to render things beautifully. However, the graphical enhancements for non-Tegra devices would look minimal. If you want the graphics to blow your mind, you’d need Tegra. 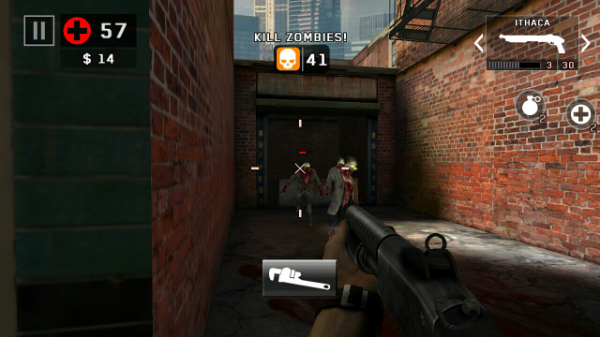 One of the biggest changes of the game is the controls. Yes, you still have the run-of-the-mill left “touch-stick” for going forward, backward, or sideways, and the right one for aiming and changing facings, as well as touch buttons for the items. However, the game now employs an auto-trigger button by default, meaning that once a target is in your crosshairs, you automatically start shooting. This is a boon for FPSes for mobile and alleviates a lot of the difficulty involving touchscreen controls for such games. For one, you can run, aim, and shoot all at the same time. And you would need this skill because the game is insanely challenging. However, if you wish to return to the “classic” controls of having the manual trigger button, then you can simply change it in the settings.

One of my caveats with the game, though, is this: If you’ve played Dead Trigger 1, there’s nothing much new to see in Dead Trigger 2 (with a couple of exceptions). The missions are still the same – there’s the “kill all the zombies you see” (Assault), survival mode (Defend and Sentry), the requisite get X number of items (Operations, Power Run, and Supply Run), and destroy X number of items (Operations, Seek and Destroy). However, they did add a couple of new things to spice things up a little. For one, some zombies now employ weapons, albeit they’re just melee items, like clubs, sticks, or whatever. They also walk faster than the average zombies (although there are some zombies that walk the same pace without weapons). And then there’s the a-holes of the game: the Super Zombies.

The Super Zombies are like mini bosses that take a lot of time to put down and have different abilities. The concept isn’t new. In fact, you get to encounter them in the first game as well, albeit at a rarer pace. In the sequel, you encounter them at every mission at least twice (sometimes as much as 5 times), and there are at least 5 of them (or I’ve encountered 5 of them so far). And each one ranges from challenging to frustrating to deal with depending on the difficulty and mission type. And you would need to employ different strategies to deal with each of them if you don’t want to use explosives. If you do, then explosives can make short work on all of them.

You will need/want to deal with them, though, because aside from the good amount of money you get once you defeat them, they’re the only way to get the blueprint parts for new items and weapons. And you will need both (and an insane amount of the former) if you want to go far into this game.

Show Me The Money!

The biggest change in the game, however, is also its biggest negative: the way in-app purchases are implemented. There are two kinds of currencies within the game: the money ($) and gold. Ok, I’ll let the good one out first: all items and weapons are now purchasable via money, even the uber powerful ones (in the first game, some weapons can only be purchased via gold). Yeah, that’s the only good news. The bad news is they all cost an insane amount of money, and they take a long time to create and upgrade. And you can’t upgrade or buy them right away, even if you’ve been able to collect all blueprint parts for them.

For example, I have all the blueprints I need to be able to buy the M4, which costs $112,000 and wait for 24 hours – no small feat given the relatively small amount of cash you get out of missions. Unfortunately, I can’t buy it because it’s a level 6 weapon and my gunsmith is only at level 5. I need to upgrade my Gunsmith to Level 5 which costs another $75,000 and a waiting time of 24 hours. But I can’t do that because I need to upgrade my Technician first to Level 6, which costs another $150,000 and 3 days’ worth of waiting time. If you don’t want to wait, or to skip the upgrades, I can buy the M4 via gold. In-game, there is no way to get extra gold unless you buy them with real money, and as you guessed it, it’s kind of expensive.

[three_fifth]Grinding for cash can also be tiresome. And yes, all this is geared to force you into buying gold from them.[/three_fifth]

Before every mission, you get to choose the difficulty curve (Easy, Normal, and Hard), giving up mission completed bonus for easier-to-kill zombies. Unfortunately, the money you earn also doubles as your experience point, so the more money you earn, the higher your level becomes. But that’s not a good thing. You see, the only rewards you get when you level up are cash and one extra health point. But the zombies level up with you as well, so they also all get higher hit points, rendering your weapons weaker unless you’re able to upgrade them (which is why you’re grinding for money in the first place). In effect, you will never feel that you get stronger. To be more precise, you’re just trying to keep up with your enemies, not the other way around. And yes, all this is geared to force you into buying gold from them, so that you won’t go through the hassle of upgrading/buying weapons and items appropriate to your level. 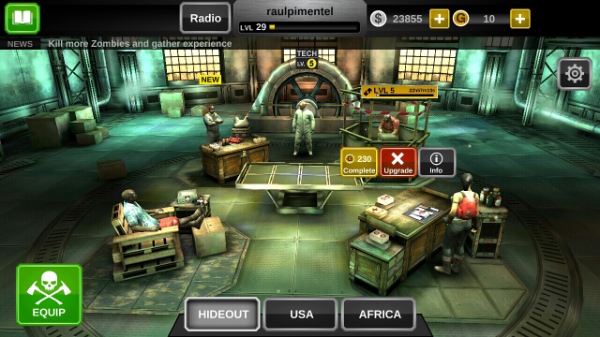 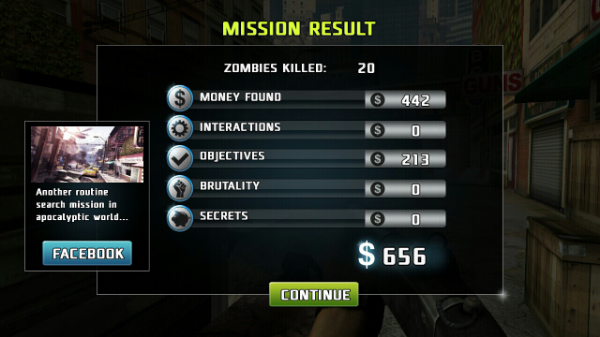 Another frustrating thing about the game is that you need constant internet connection while playing this game.

Allegedly, it’s supposed to be because missions in other continents (we only have Africa, at the moment) involve you joining up with players around the globe in fighting zombies in certain countries. They were touting bout this, and a lot of people got excited over this. Don’t. It’s nothing more than a glorified Leaderboard. Each country in a continent only has a finite number of zombies (tens to hundreds of millions, though), and the leaderboard records how much zombies you’ve killed – your “contribution” to the global resistance. After wiping out all the zombies in one country, all of you get a reward (I’m not sure if you get an extra reward when you’re at the top 5 or something). And, yes, that counter is the ONLY reason why you need to be connected to the ‘net to play. IMHO, it doesn’t justify it. This would’ve been a perfect pick-me-up game, and they ruined it! 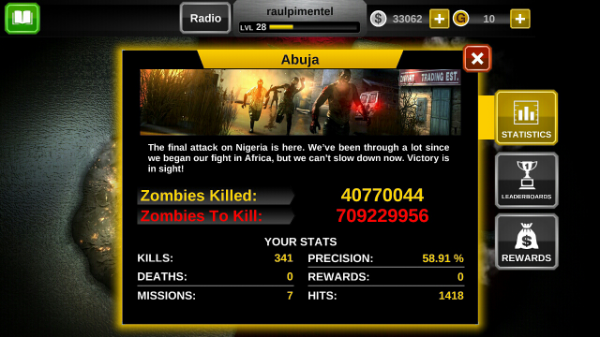 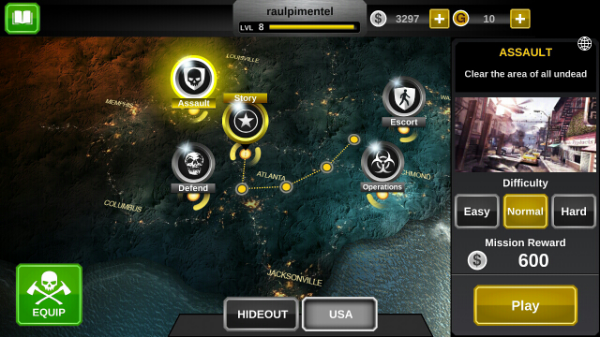 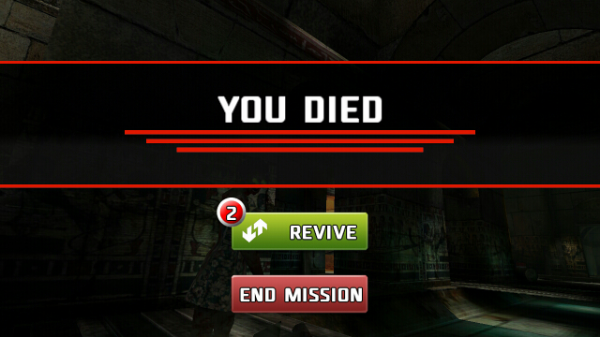 [two_fifth]Despite my caveats, I have to admit that blasting or slicing a zombie’s head off never gets old.[/two_fifth]

If you don’t mind the copious amount of grinding and the frustratingly long waiting time to buy/upgrade stuff (unless you bite their IAPs), then there’s still much fun to be had with this game. It’s definitely better than its predecessor in a lot of ways save one: offline gaming. This could turn out to be a deal breaker for some, and I don’t blame them. Personally, I have games that require constant internet connection to play (which was why I uninstalled MC4 in the first place), but for some reason, I stuck with this game. I’m chalking it up to the fact that I love things that are related to zombies. I’m a zombie apocalypse nut, after all.