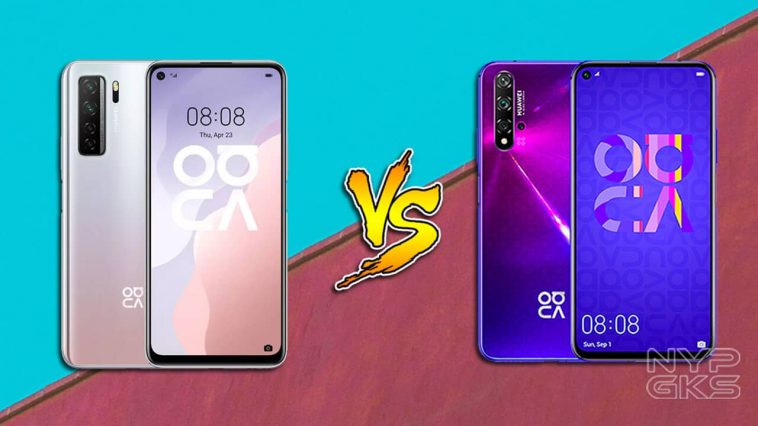 Huawei has some of the most value-oriented midrange smartphones in the market today.

Just recently, they released the Huawei Nova 7 SE 5G in the Philippines. It’s the first 5G midrange phone in the country and the cheapest smartphone to have this connectivity feature.

It goes without saying that this below-Php20,000 smartphone has tons of other high-end specs, without the expensive price of a flagship one. However, how does it stacks up with Huawei’s previous releases?

Today, we’ll be comparing it with the blockbuster Huawei Nova 5T. If you remember, this budget device became a hit thanks to its flagship processor that we only saw on Php30,000+ smartphones before it.

With that, here in our Huawei Nova 7 SE 5G versus Huawei Nova 5T specifications and features comparison, we’ll check out the difference between the two to see if the newer model is really worth getting, or going with the now-cheaper older device is still the best way to go.

As we always say, the design is subjective and differs from different people. But in this case, it really doesn’t matter since both the Nova 7 SE 5G and Nova 5T look pretty identical.

The two are sandwiched by glass with a metal chassis. But in typical Huawei fashion, the actual glass used were never mentioned.

You can get the Nova 7 SE 5G in Purple, newer Crush Green option, and a cleaner Space Silver model. On the other hand, the Nova 5T comes in Midsummer Purple, Crush Blue, Crush Green and Black colorways.

They also come with a punch-hole on the top left for the selfie camera. Creating a much cleaner look with thinner bezels.

The new Huawei Nova 7 SE 5G obviously takes the win on this one. For starters, it has a larger 6.5-inch panel, versus the 6.26-inch on the Nova 5T.

They do have the same FHD+ resolution, but the Nova 7 SE takes another one-up with its HDR10 support, something the Nova 5T lacks.

With its flagship status, you’d think the Kirin 980 is miles ahead of the Kirin 820 5G in terms of performance. But as per a couple of benchmark tests and performance reviews, the difference is almost negligible.

For a perspective, the Kirin 980 averages at about 405,000 in AnTuTu, while the Kirin 820 5G is at around 380,000. The slight difference in performance can be forgiveable since you’re getting a 5G and Bluetooth 5.1 connectivity out of the Nova 7 SE.

The Huawei Nova 7 SE 5G also has an NM card slot for storage expansion, while the Nova 5T is stuck at 128GB.

But if raw performance is what you’re after, the Kirin 980’s higher clock speed and more powerful GPU can crunch more frames on games.

The Huawei Nova 7 SE 5G also takes home the trophy on this round. It has a sharper 64-megapixel main shooter, while the Nova 5T only has a 48-megapixel camera.

But to the Nova 5T’s credit, it does have a sharper 16-megapixel ultra-wide camera, while the newer model only has 8-megapixel.

Personally, we’d go with the one that has a better primary camera — the camera that you’d be using most of the time. What’s more, the Nova 7 SE 5G also has a dual video feature, which can use the front and rear camera on the same video.

The Huawei Nova 7 SE 5G is a clear winner here. As you just saw on the specs comparison table above, this thing has a 4,000mAh battery that’s obviously bigger than the 3,750mAh capacity of the Nova 5T.

The Nova 7 SE 5G might have some of the newer and more impressive hardware, but it suffers from the main disadvantages of newer Huawei smartphones — the software.

The lack of Google Mobile Service is really hurting its usability. But as you can see on our video above, we were still able to download most apps we use on a normal basis — like Facebook, Instagram, and even YouTube — using Huawei’s own App Gallery and third-party app stores.

However, there’s no denying that downloading apps directly from the Google Play Store, which the Nova 7 SE 5G lacks, is more convenient and easier to update.

To the Nova 7 SE 5G’s credit, it does have the aforementioned modern connectivity features like 5G and Bluetooth 5.1, making it more futureproof than the Nova 5T.

But, it’s worth noting that the Nova 5T has NFC for those who actually use it.

Bottom line is, if you want the best value out of your money — the Huawei Nova 5T is still worth getting. It has a reliable flagship processor, decent cameras and battery, and more importantly, GMS support.

Although, you have to settle with the fact that you’ll be downloading most of your apps using third-party app stores until they become available on the Huawei App Gallery.