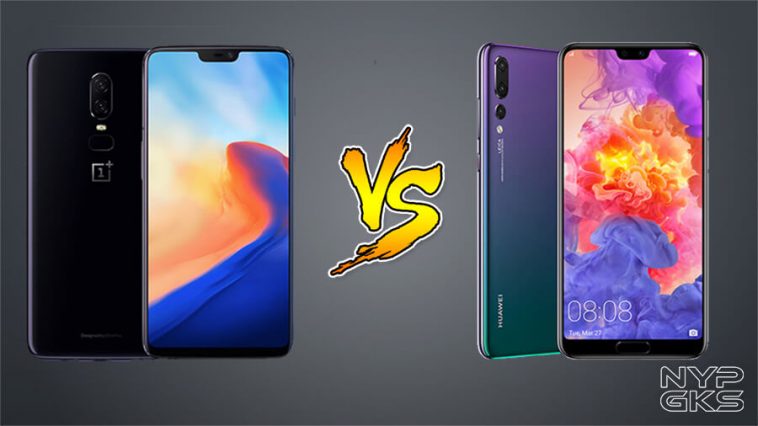 OnePlus tries to redefine the industry once again as they launch the new OnePlus 6, a smartphone that will go against the other more expensive flagships in the market.

As expected, the company has equipped their newest offering with a slew of top-of-the-line specs that you don’t expect to have from a flagship smartphone. It looks great, priced great, and performs great —at least on paper.

However, OnePlus is not alone in doing this kind of scheme. Huawei, out of nowhere, has been getting really better at the game recently.

Their latest crown jewel, the Huawei P20 Pro, is hailed as one of the best Android smartphones that out today. It was even able to beat the Galaxy S9 Plus in some areas in our specs comparison. It’s pretty clear that both OnePlus and Huawei make some of the best value-oriented flagships today. So today, we’re comparing them to see how they fare against each other.

Which offers more value for money — the Huawei P20 Pro or the OnePlus 6? Let’s figure that out in our OnePlus 6 and Huawei P20 Pro specifications and features comparison. The Huawei P20 Pro clearly blew the OnePlus 6 out of the water in some areas in this specs comparison. But it’s actually unsurprising considering the huge price gap. What’s more unexpected is that the OnePlus 6 managed to beat the P20 Pro in a few key areas.

But the thing is, the difference is not far from each other. Sure, the P20 Pro has the better numbers, but the OnePlus 6 did its best to match it — and it did well.

The Huawei P20 Pro has a 6.1-inch Full HD+ OLED display with the display notch on top. That’s almost identical to the screen found on the OnePlus 6 which has a size of 6.28-inches, FHD+ resolution, and the screen notch. Actually, the screen on the OnePlus 6 might be even better as it has sRGB and DCI-P3 coverage and is protected by Corning Gorilla Glass 5. The OnePlus 6 runs on Qualcomm Snapdragon 845 processor which, as per a lot of reports and reviews, is proven to be faster and more reliable than the HiSilicon Kirin 970 chipset found on the P20 Pro.

However, the Huawei P20 Pro easily obliterated the OnePlus 6 in the camera and battery department. If you’ve been following the news, the P20 Pro is currently hailed as the best smartphone camera by DxOmark as of writing — for good reason. Its camera prowess is simply out of this world as it takes amazing pictures even in low-light. It is one of the first smartphones to have a triple rear camera setup. There’s a whopping 40-megapixel camera that shoots in color, another 20-megapixel for the artsy monochrome shots, and another 8-megapixel sensor for a 3x optical zoom. They also have Leica optics and can shoot 960fps slow-motion videos.

On the other hand, the OnePlus 6 has a 16-megapixel and 20-megapixel dual rear cameras. It can also shoot slow-motion videos, but it can only go up to 480fps. Not really impressive, but not too bad either.

The Huawei P20 Pro also takes home the crown in the selfie department. It comes with a 24-megapixel front-facing camera with a 3D Portrait Lighting. On the other hand, the OnePlus 6 has a slightly boring 16-megapixel selfie shooter.

Lastly, the Huawei P20 Pro has a 4000mAh battery. which is substantially bigger than the 3300mAh capacity on the OnePlus 6. But then again, all of these extras come with a price. The Huawei P20 Pro has an official retail price of Php44,990 here in the Philippines. That is already cheaper than most flagships that are out today, but still relatively more expensive than the OnePlus 6.

The official price of the OnePlus 6 here in the Philippines is yet to be announced. However, its top-of-the-line model only has a retail price of USD629 (~Php33,000) in the US. We can expect the price to inflate once it gets here. But I highly doubt that it will become more expensive than the P20 Pro.

To finally wrap it up, if you’re all about smartphone photography, and money is not an issue, then the Huawei P20 Pro is the best option for you. But if you just want a proper flagship device without spending too much money — the OnePlus 6 clearly offers a very enticing value for the money.