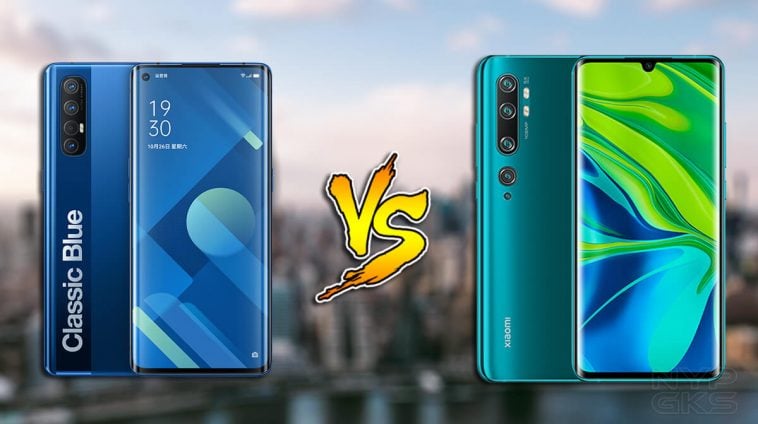 A better camera phone or an all-around phone? Which one should you pick? In this spec comparison we’ll be talking about two recently released phones that fit said descriptions in OPPO Reno 3 Pro and the Xiaomi Mi Note 10 Pro.

First up on the list is the OPPO Reno 3 Pro. Probably the main feature of the Reno 3 Pro is its 5G connectivity. Not all phones currently have this feature and it guarantees greater speeds and stable connection than 3G and 4G. From the specs above, you can clearly see that the two phones are fairly different from each other when it comes to their hardware.

Let’s start talking about the display first. The OPPO Reno 3 Pro has a 6.5-inch AMOLED Display compared to the slightly smaller 6.47-inch Always-On AMOLED Display of the Xiaomi Mi Note 10 Pro. To add, both phones are protected with Corning Gorilla Glass 5. On the memory front, the Xiaomi Mi Note 10 has a 8GB RAM and an internal storage of 256GB. While the OPPO Reno 3 has 8GB and 12GB RAM variants along with 128GB and 256GB of internal Storage. Sadly, both phones are not capable of memory expansion. The two handsets’ selfie cameras are both 32-megapixels as well. They do have a large disparity when it comes to their weight as the Xiaomi Mi Note 10 Pro weighs 208 grams while the OPPO Reno 3 Pro only weighs 171 grams. Some similarities between the two devices include having an under display fingerprint scanner, face unlock feature as well as a USB Type-C Connector.

Finally, let’s talk about probably the most important factor when choosing a phone — price. In this NoypiGeeks specs comparison, the Xiaomi Mi Note 10 Pro takes the cake. If you’re looking for a phone that has a great camera thanks to its industry first 108-megapixel main one, along with a bigger battery and memory — there’s no doubt that this should be the first choice phone for you.

Though, if you’re looking for an all around phone with a better processor, 5G LTE connectivity and a slightly lighter phone then the OPPO Reno 3 Pro should be your choice.