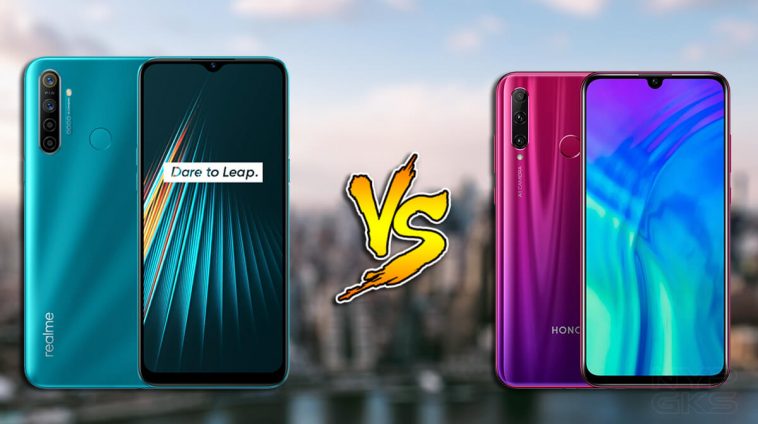 In this NoypiGeeks spec comparison, we’ll be talking about two smartphone brands that seem to be at the opposite poles of one another in terms of popularity here in the Philippines.

We’re talking about the recent budget friendly releases of Realme and Honor — the Realme 5i and the Honor 20 Lite, respectively. First up on the list is the Realme 5i. The Realme 5i is the downgraded version of the vanilla Realme 5. It features a quad-camera set up, a humongous battery and a very stylish yet elegant design.

Next up is the Honor 20 Lite. Probably its main feature is its 32-megapixel selfie camera, which is very uncommon in budget friendly phones these days. Out of the two phones, which one should you get? Is opting for the commonly known brand the best move? Or would investing on the up and coming brand here be the better option? These are the questions we would like to answer in this Realme 5i versus Honor 20 Lite specifications and features comparison.

Processor-wise, the Realme 5i takes the win thanks to its Qualcomm Snapdragon 665 and Adreno 610 GPU. On the other hand, the Honor 20 Lite has a respectable HiSilicon Kirin 710 chip and Mali G51 MP4 GPU. On the memory front, the Realme 5i has a 3GB and 4GB RAM variant while the Honor 20 Lite has the lone 4GB Variant. And in terms of internal storage, Realme has a 32GB and 64GB variant to choose from while the Honor 20 Lite only has a 128GB storage option. Thinking the internal storage space is not enough? You can always expand your storage up to 256GB for both phones.

Now when it comes to cameras, this is where the two devices vary by a large-scale. The Realme 5i has a quad-camera set up that’s composed of a 12-megapixel main shooter, 8-megapixel (ultra-wide), 2-megapixel(depth sensor) and 2-megapixel (macro) cameras.

Meanwhile, the Honor 20 Lite has a triple camera set up only which comes with a 24-megapixel main shooter, 8-megapixel (ultra-wide) and 2-megapixel (depth sensor) sensors.

See also: Realme 5i vs Realme 5: What’s the difference? At the front, the Honor 20 Lite houses a 32-megapixel selfie camera while the Realme 5i only has an 8-megapixel one. That’s a very huge gap, although that doesn’t necessarily mean that Honor’s front camera perform better.

Other similarities between the two phones include a rear mounted fingerprint scanner, face unlock feature, and a micro USB connector. In this match up, the Honor 20 Lite is definitely ahead in terms of camera specs and that’s understandable because of the price difference. But other than that, the Realme 5i is the overall better choice thanks to its more budget friendly price tag.