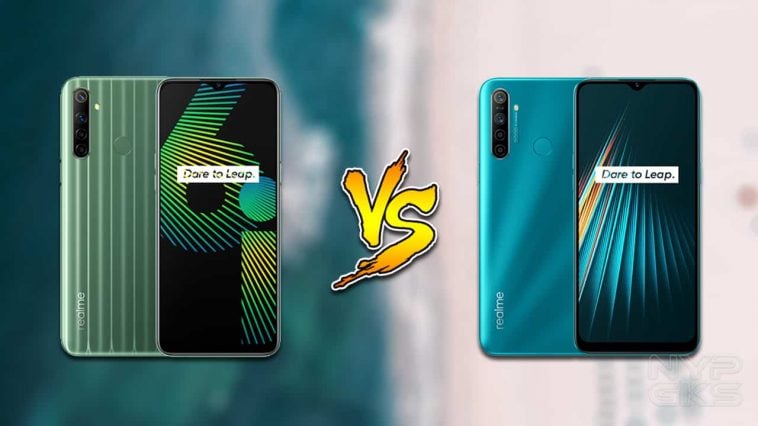 Realme’s portfolio in the Philippines is increasing and increasing, almost in a quarterly basis.

Just recently, the company launched the Realme 6i. A device positioned in the below-Php10k price category.

With a set of midrange-level specs and attractive design, it’s geared toward people looking for a powerful smartphone without breaking the bag.

However, let’s not forget that the Realme 5i is still part of the company’s offering. In fact, this device is only a few months old.

So the question is, why did the Realme 6i came out early? Is it really the successor to the Realme 5i? Which between them is right for you? We’ll answer those questions in our Realme 6i versus Realme 5i specifications and features comparison.

Despite the branding, it feels like the Realme 6i is more like a successor to the Realme 5 than the Realme 5i. However, that doesn’t mean that the latter is a lousy competitor.

In fact, if your budget is really limited, you can settle with the Realme 5i. This thing has an identical 6.52-inch HD+ display and a large 5,000mAh battery.

The Qualcomm Snapdragon 665 octa-core processor, although it’s starting to age, is still really capable. You can check its performance in our gaming review.

However, you might be better off paying more with the Realme 6i. After all, it’s only Php1,000 more. If you’re already spending Php5,000 and up, you might as well get a better device.

For an extra Php1,000, you’re getting a smartphone with a MediaTek Helio G80 octa-core processor. For a perspective, it got a score of 200,000+ in AnTuTu, while the Snapdragon 665 is only at 140,000+ points. You can check its benchmark scores in our unboxing and hands-on.

On the upside, both devices have 8-megapixel ultra-wide and two 2-megapixel sensors on the back. We also have the rear-mounted fingerprint scanner back here.

In conclusion, both devices are really worth their price tag. However, we gotta hand the win to the Realme 6i. The extra Php1,000 you’d be paying would be really worth it.