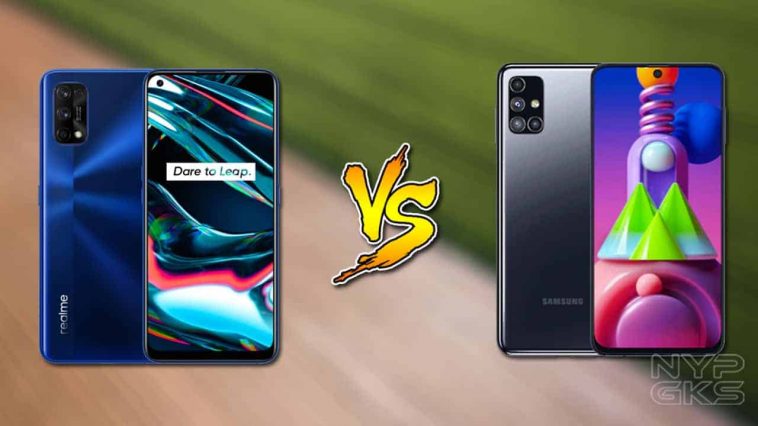 If you’re in the market for a brand new midrange device, but has extra budget to splurge on a sub-Php18k smartphone, then this comparison is for you.

First, we have the Realme 7 Pro. Its official SRP in the Philippines is yet to be announced (we’ll update this article once it does), but we expect it to be priced around Php18,000, just like its predecessor.

Update 10/03/20: Updated the article to reflect Realme 7 series price in the Philippines.

As you already know, it packs a lot of killer specs for the price. It goes to show that you don’t need an expensive high-end smartphone to have a complete smartphone experience.

To see if it’s indeed the right smartphone to get, we’d be comparing it to the Samsung Galaxy M51. Considered as the biggest-battery-on-a-Galaxy-phone, there’s more to this handset than its impressive battery longevity.

So today, we’ll see in our Realme 7 Pro versus Samsung Galaxy M51 specifications and features comparison which one is better and worth getting. Let’s begin.

Just like most Galaxy M devices, the Samsung Galaxy M51 features a pretty straightforward design. We have a clean paint job on the back that’s available in Black and White. But it’s plastic.

Both phones have rectangular glass on the back for their quad cameras, while on the front there’s a punch-hole for their selfie cameras.

However, we do like the look of the Realme 7 Pro better. It has a split design on AG material, which shines with light, adding an aesthetic touch. You can get it in Mirror Silver and Mirror Blue.

The Realme 7 Pro is also noticeably lighter and more compact. Which is no surprise since the Galaxy M51 has an enormous battery (more on that later).

Realme removed the 90Hz refresh rate from the Realme 6 to allow the Realme 7 to have a more colorful 6.4-inch FHD+ Super AMOLED screen. That’s the same panel used on the Galaxy M51, but much bigger with its 6.7-inch size.

However, the Realme 7 instantly takes back the spotlight with its stereo speaker, as the latter settles for a single bottom-firing speaker. It creates a more immersive experience when watching movies or playing games.

However, it’s worth noting that the Snapdragon 720G on the Realme 7 Pro has a newer and more power-efficient Bluetooth 5.1. But the latter makes up for it with its NFC connectivity, which you might use less than Bluetooth.

Both the Samsung Galaxy M51 and Realme 7 Pro shares a similar set of cameras. They use the same main 64-megapixel IMX 682 sensors, has two 2-megapixel auxiliary cameras, 240fps slow-mo, and 32-megapixel selfie cameras.

Albeit, they do have key differences. For one, the Realme 7 Pro has a 120fps slow-mo recording. It’s fun to play with, but may not be as useful as having a sharper ultra-wide camera, which the Galaxy M51 has.

Here’s a clear win for the Samsung Galaxy M51. As you can see, it has an enormous 7,000mAh battery, which is easily the biggest battery you can get from a mainstream phone. It goes without saying that it dwarfs the 4,500mAh capacity of the former.

It may have a smaller battery, but the Realme 7 Pro does have a much faster charging. As you can see, it sports a 65W SuperDart charging, making it one of the cheapest smartphones to have this feature.

The Realme 7 Pro may run out of battery fast, but at least you can charge it much faster. With its small battery and ultra-fast charger, a full 100% top-up will only take about 30 minutes. On the other hand, the big battery and not-so-fast-charging on the Galaxy M51 may take hours to fill up.

Both devices are some of your best options for the price. So to see which one is better for you, let’s talk about the pros and cons.

Obviously, going with the Samsung Galaxy M51 entitles you to an enormous battery, a sharper 12-megapixel ultra-wide camera, NFC, and a bigger screen. However, just like other Galaxy M devices, the availability of this handset might be very limited as it’s an online-exclusive release.

That’s where the Realme 7 Pro shines. This phone will be available in tons of Realme stores nationwide, both online and offline. Plus, it has hardware advantages like a much lighter and compact build, 120fps slow-mo selfie, and other flagship-like features stereo speakers and a much faster 65W fast charging.