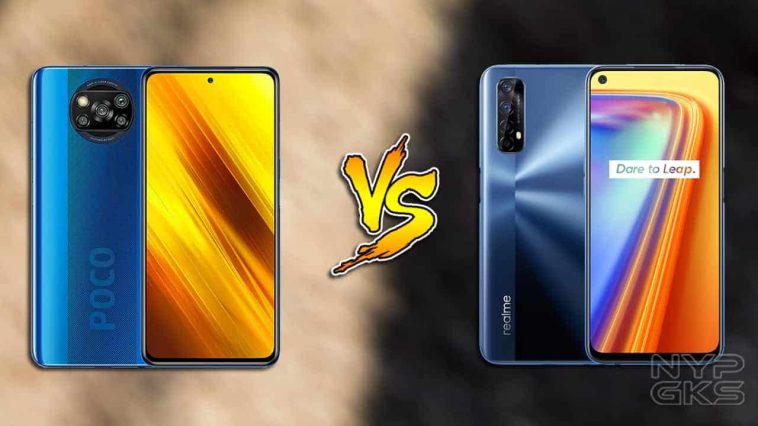 Looking for a feature-packed smartphone that doesn’t break the bank? This specs comparison is for you.

First, we have the new POCO X3 NFC. This device immediately became a hit and flew off the shelves thanks to the incredible value that it offers for the price.

The X3 NFC disrupted the sub-Php10,000 range that it could also dominate the smartphones’ higher its price category. But is that actually the case?

To find out, we will be comparing it to the Realme 7, the latest release from one of Xiaomi’s biggest rival. The Realme number series have become really popular since its initial models as, just like the POCO device, it offers a lot of features that you don’t expect for its price. (Note: the Realme 7 series will launch in PH on September 30. We’ll update this article with the official price and configuration).

Update 10/03/20: Updated the article to reflect Realme 7 series price in the Philippines.

So, without further ado, our POCO X3 NFC vs Realme 7 specifications and features comparison will reveal if a sub-Php10k smartphone can actually go against a device that costs around Php13K or higher. Let’s start.

We’re really liking the clean and fresh design of the Realme 7. It has a frosted AG surface that shines as it reacts to light. The strip on the far left accentuates the rectangular camera glass and the Realme logo.

However, it’s quite obvious that the POCO X3 NFC has a more striking look. The quad cameras are in a unique layout. There’s metallic luster texture that dominates the design and a large POCO logo that has a special paint job that changes colors as it reacts to light.

It also has a sturdier Corning Gorilla Glass 5 protection and an aluminum frame.

Both models are available in two colors. You can get the POCO X3 NFC in Shadow Gray and Cobalt Blue, while the latter is available in Mist White and Mist Blue.

Here’s a clear win for the POCO X3 NFC. As you can see, it has a whopping 120Hz refresh rate with a responsive 240Hz touch sampling rate. It even has HDR10+ support. This could easily be the cheapest smartphone in the Philippines to have these features.

That easily beats the still-impressive 90Hz 6.5-inch screen on the Realme 7.

What’s more, POCO also managed to put a stereo speaker setup and Hi-res certification on the X3 NFC, while the Realme 7 settles for a single speaker.

The Helio G90T of the Realme 6 allowed the device to maintain a spot in AnTuTu top list for months. And with the new Helio G95, we expect the Realme 7 to top its predecessor.

However, a couple of benchmarks and performance reviews favors the Qualcomm Snapdragon 732G of the POCO X3 NFC over the Helio G95 of the Realme 7. With that, you can expect a smoother experience on the Xiaomi device.

The X3 NFC also brings a newer Bluetooth 5.1 standard. This device also has NFC and an infrared IR blaster, which are both missing on the Realme 7.

Although, the Realme device does have an 8GB/128GB variant, which really matters if you like running a lot of apps at once. On the upside, both of them have their respective cooling systems.

Both devices come with the same 64-megapixel Sony IMX682 primary cameras, with extra 2-megapixel sensors that you may never use.

It also has a 960fps slow-mo recording, which is really cool to play with if you get the hang of shooting with it.

The Realme 7 comes with a 5,000mAh battery with 30W SuperDart charging. That should be enough to last you for an entire day or two of light to moderate usage.

Although, the POCO X3 NFC still managed to win this round by a margin. It comes with a slightly bigger 5,160mAh battery with a little faster 33W charging. But considering it has a more power-hungry 120Hz screen, the actual battery longevity might be lower than the latter.

Well, I guess we have a clear winner here. For a much cheaper price, the POCO X3 NFC managed to have a smoother screen, faster processor, a sturdier and more attractive build and design, better-sounding audio, newer and flexible connectivity features, and better cameras.