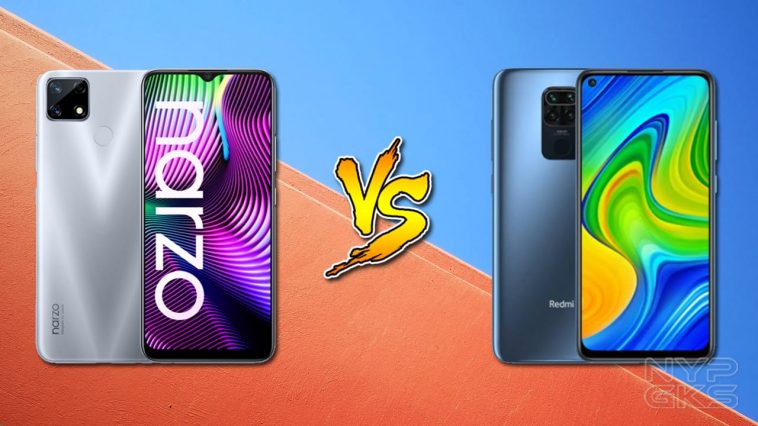 Looking for a complete smartphone that doesn’t break the bank? Today, we’ll be comparing two of your best options in the sub-Php8,000 price range.

First, we have the newly released Realme Narzo 20. Bearing a couple of bang-for-the-buck features, it’s the first device from the Narzo line to arrive in the country.

The Narzo 20 arrived in the same price category as the popular Redmi Note 9.

It’s been in the Philippines since May and has become an instant hit for those who want an all-around device for those who are on a budget.

Here in our Realme Narzo 20 versus Redmi Note 9 specifications and features comparison, we’ll see which between these devices is actually better for you.

Being budget smartphones, both the Realme Narzo 20 and Redmi Note 9 are primarily built with plastic. However, the latter gets a lead thanks to its sturdier Gorilla Glass protection and a splashproof body. No mention of both features on the Narzo 20. However, we do expect it to withstand minor water splashes.

The design is pretty subjective, so we’ll let you decide. The Redmi Note 9 is available in three colors: Polar White, Midnight Grey, and Forest Green.

It has a glass-like shiny texture, albeit still plastic. Which means it’s prone to fingerprint smudges and hairline scratches overtime.

The Realme Narzo 20 is available in two colors: Silver Sword and Blue Blade, with V reflections that react to light. Just like most budget Realme phones, this one is made of textured plastic, which prevents the fingerprint smudges and random scratches issues of the Redmi Note 9.

Both devices have 6.5-inch screens. The Redmi Note 9 steals the win by having a sharper FHD+ resolution, while the Narzo 20 settles for HD+.

The two have headphone jacks, FM radio, and single loudspeakers. Again, they are sub-Php8,000 smartphones, so don’t expect stereo speakers from them.

This is where they go neck-and-neck. As you can see in the specs table above, both models are powered by the same MediaTek Helio G85 processor. That should be enough for playing games, online learning, and whatnot.

However, the Realme Narzo 20 gets a one-up by having 4GB of RAM, which you wouldn’t get on the Redmi Note 9 until you get the top-tier model. Although the Redmi 4GB model does have twice the storage than the Narzo 20, that’s something you can easily fix with a microSD card.

However, the Redmi Note 9 maneuvers by having a sharper 13-megapixel selfie camera and an extra 2-megapixel sensor for bokeh shot. If you’re into photography, you’re getting great shots whichever you choose.

Here’s where the Realme Narzo 20 shines. As you can see, it has an enormous 6,000mAh battery — larger than the 5,020mAh capacity that the Redmi Note 9 has.

They also share the same 18W fast charging support. To Xiaomi‘s credit, they did included a 22.5W fast charger on Note 9’s box.

So, which one is right for you? If you’re shopping in an entry-level segment, chances are, you want the best possible performance that you can get for the price. With that, we think that the Realme Narzo 20 is right for you.

The HD+ resolution screen will give the CPU more room to flex than on the FHD+ one. A low-resolution screen also consumes less battery — a big plus since the Narzo 20 also has a bigger battery. It also has a larger RAM capacity for the price for better multitasking.

But if having a sharper screen and extra cameras are really important to you, then go with the Redmi Note 9 instead. Xiaomi devices often offer the most value for the money, and this one’s no exception.