Dell has come out with a multipurpose, attractive and interesting new desktop PC that would surely reignite the interest of many in desktop computers.

Interest in desktop PCs are waning by the day and so it’s usually a mundane task creating a PC that would appeal to the public. That’s what Dell seems to have achieved with the Dell XPS 27 which was unveiled during the recently concluded CES 2017 in Las Vegas.

The latest Dell XPS 27 comes with an amazing speaker setup that would make you think the device is meant to entertain a crowd inside a night club. A total of 10 speakers were crammed inside the desktop, lying at different locations. Six of the speakers are positioned by the side of the display, directly facing the user. Of the six, four of the speakers cover the mid range and bass frequencies, while there are two tweeters, one in each side of the display. In addition, there are two full range speakers and a pair of passive radiators.

With this kind of setup, you definitely don’t need separate speakers in order to feel the real vibe pouring out from the music player. More so, the speakers aren’t just any ordinary speakers as Dell claims that the XPS 27’s audio system was engineered in collaboration with renowned music producer Joseph Jack Puig. This gives Dell the confidence to lay claim to having “the best sound for an all-in-one PC.” The company touts the XPS 27 audio system as twice as loud as Apple’s iMac and it also has up to 10 times the bass of HP’s Envy 27. 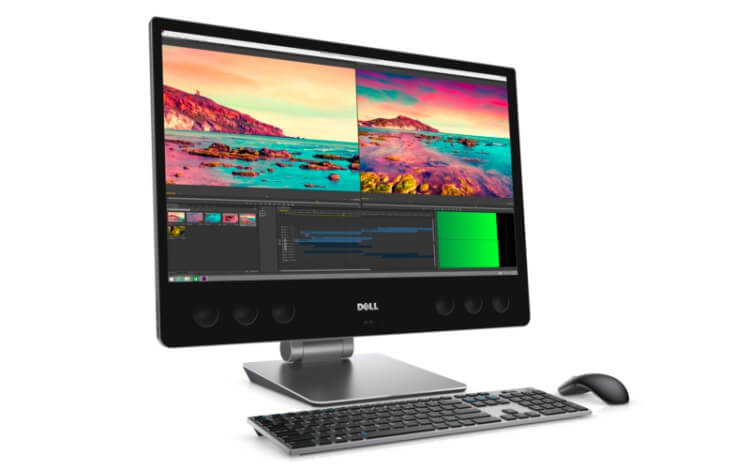 Away from the audio system, the Dell XPS 27 also excel in other spheres. It packs a crystal clear 4K touchscreen display with 300 nits brightness and a pivot stand which can be bent almost to a point where it looks as if the laptop is lying flat on a table. There’s also another version without touch screen capability and it even comes with a higher 350 nits brightness. The pivotal stand is absent in the non-touchscreen model and it comes with a lighter 13kg weight, while the touchscreen model weighs 4kg heavier at 17kg.

Powering the Dell XPS 27 is an Intel sixth-generation CPU with two different chip models available – one running the Intel Core i5-6400 CPU clocked at 3.3GHz using Intel turbo Boost and another fired up by the Intel Core i7-6700 processor clocked at 4GHz. There is up to 32GB of DDR4 RAM onboard backing both processor models which can even be expanded up to a whopping 64GB. A storage choice of up to 1TB solid state storage and 2TB storage hard disk drive is already viable. The storage can be expanded further with a 32GB M.2 SSD included. The SSD is said to be a faster breed than the SATA’s speed limits. It can also be offered in 512GB and 1TB M.2 SSD if needed.

The graphics of the Dell XPS 27 is fired up by an Intel graphics chip but the AMD’s R9 M470X graphics chip is available for immediate upgrade and Dell also promised to offer a higher–grade AMD R9 M485X graphics chip sometime in the near future. In addition, there are lots of connectivity options available on the PC. Although the device comes with two USB Type-C ports, there is also a headphone jack, USB 3.0 ports, Thunderbolt 3 ports, an HDMI output, SD card reader, Gigabit Ethernet Connector, as well as audio output.

The Dell XPS 27 is ready to hit the market and it would do that clutching a price tag starting at $1,499. The price will go higher for the models with higher specifications.