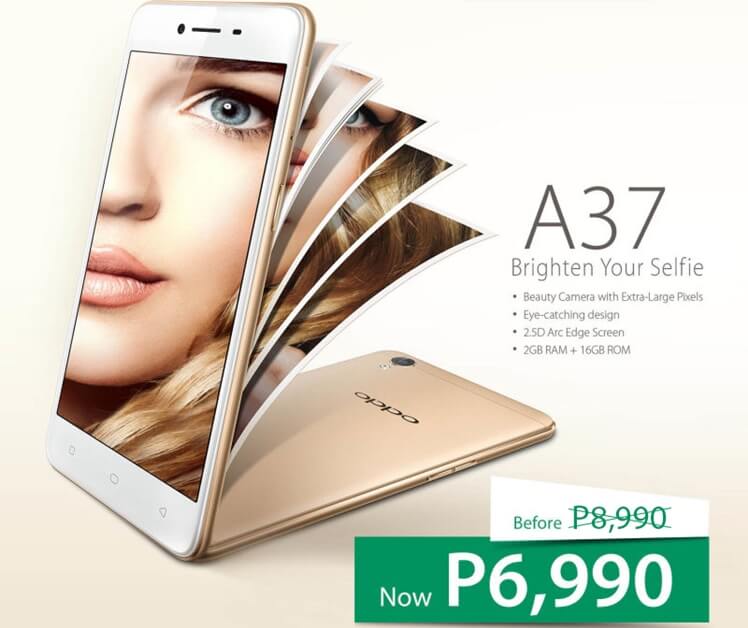 OPPO has announced that the sleek OPPO A37 would be getting a huge slash in its price.

OPPO Philippines issued a press release where it was revealed that the A37 would soon get up to a whopping Php 2,000 off its price. The OPPO A37 was released around June last year in the country sporting a sleek design and a decent specs lineup. From its initial price of Php8,990, it is now available for Php6,990.

For a recap, the OPPO A37 features a metal body design, as well as a 5-inch HD IPS display with 2.5D arc glass and Corning Gorilla Glass 4 protective cover. The smartphone is powered by a Qualcomm Snapdragon 410 processor which is partnered with an ample 2GB of RAM. There is also 16GB of internal storage which is expandable via microSD. Keeping the lights on is a 2,630mAh battery. On the camera end, the OPPO A37 doesn’t disappoint with an 8MP f/2.2 shooter at the back and a 5MP f/2.2 sensor at the front. The front camera comes with a screen flash which aids in capturing sleek selfies even in poor lighting condition. The device runs on an extremely outdated Android 5.1 Lollipop-based ColorOS 3.0. Available connectivity options include 3G, 4G LTE, WIFi, Bluetooth, GPS, A-GPS and lots more.

For its originally SRP of Php8,990, the OPPO A37 was already a good buy. And now at Php6,990, it is obviously one of the best deals out there. So if you’re interested, make sure to get yours before the stocks run out.