Esports has made its name known globally. From friendly competitions over your local internet café, to tournaments across nations. So, why not step up the game a little? Why not take it to the next level with an Esports college degree?

There’s no mistake: Tier One Entertainment, a local gaming agency, is about to make that happen in partnership with Lyceum of the Philippines University (LPU).

The company posted on their Instagram account stating, “An esports course is on the way.” Hinting at their arrangements of the said program. They have been working closely with LPU in the drafting process which is the first step in making this official.

Bachelor of Science in Esports aims to offer two possible tracks: game design or esports management, both of which are equally fun yet challenging. He says that he isn’t ready to disclose the full curriculum yet (they are 80% through), but he did give incoming students some advice. 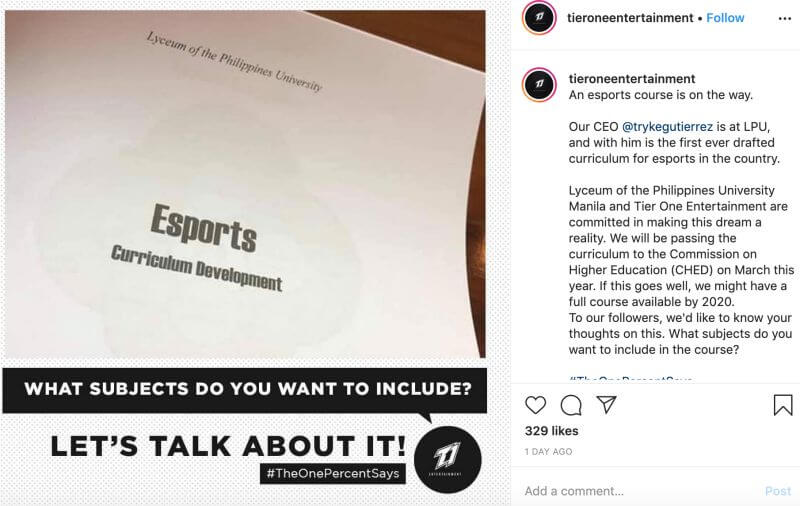 According to Gutierrez, pursuing a degree in his proposed BS in Esports is not going to be easy and that it’s not just all going to be about fun and games. He also pointed out that hard work, sacrifice, skills, professionalism, among all others, should be possessed while taking either tracks.

Tryke Gutierrez founded the company with cosplayer and gamer, Alodia Gosiengfiao, who is also its Chief Creative Officer. The drafted curriculum is set to be passed on to the Commission on Higher Education (CHED) on the 4th of March.

Back in 2017, the University of the Visayas New School started offering Esports gaming courses in the Philippines.

It’s exciting to see that companies such as Tier One Entertainment working around a possibility to combine games and education together. Will this fare well for the future education of the Filipino children one day? Let us know your comments and opinions below.

UPDATE: Here’s our editorial aboout the possible Esports college degree in the Philippines.