Although it’s been around for a couple of years now, smart wearables are still having problems taking off in the mainstream market. There are a few reasons behind this, one of them being their ridiculous prices.

This is why Cherry Mobile launched its Flare Fitness smartwatches, a line of wearables that want to lure the market by offering them at attainable and appealing prices.

Today we have the Cherry Mobile Flare Sport, a decent entry-level smartwatch that has its eye on consumers with active lifestyles. And here in our full review, we’ll see if its enough to convince people that smartwatches have a reason to stay in the market. The Cherry Mobile Flare Sport only costs Php1,299. And while it’s feature packed, the design and build quality really speaks for the price. The watch itself is constructed in plastic which made it look really cheap, although it resulted in a fairly lightweight construction.

In addition, the screen feels like it’s made of scratch-magnet material, which is why there’s a pre-installed screen protector in it. 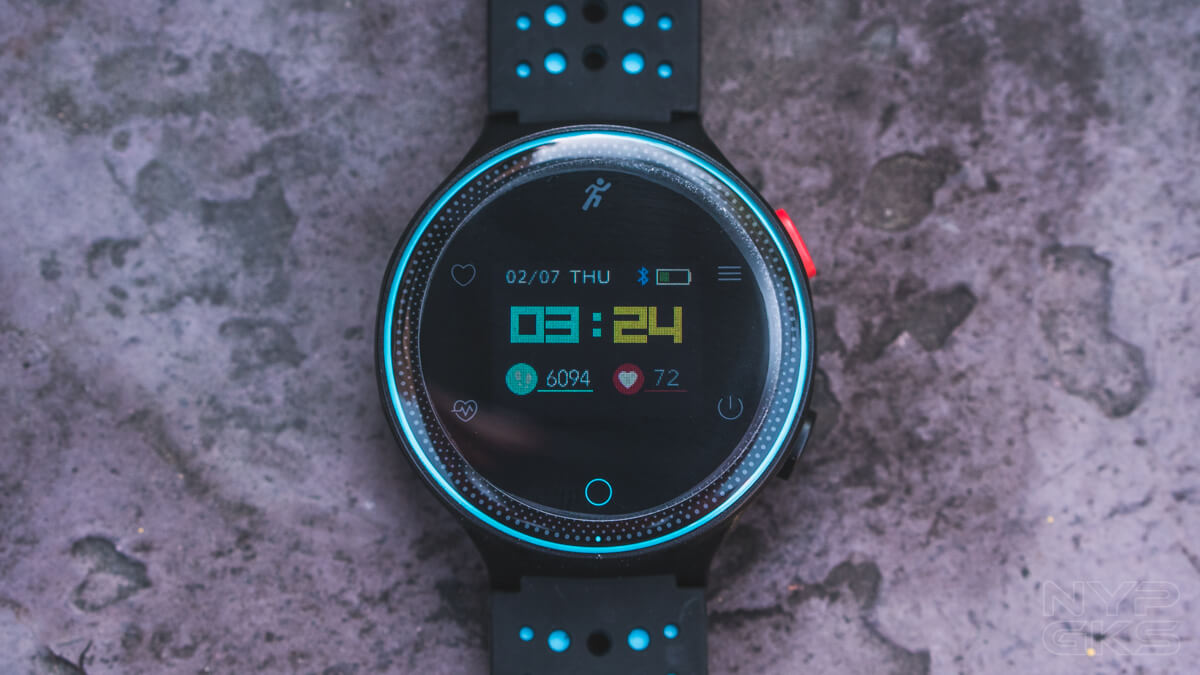 There’s a capacitive button on the middle, while all the other icons surrounding the watch face are just there for decoration and to indicate some of its features.

A distinct red button on the upper left side acts as an enter button and for switching through five different watch faces. Meanwhile, the black button below it will take you back home and turn on or off the screen.

To further illustrate that it’s a sports orientated watch, the rubber band is perforated for better sweat resistance. It also has a blue paint job, which matches the tiny strip surrounding the watch itself. A Flare branding is also printed on the metal latch.

On the downside, the Cherry Mobile Flare Sport watch is a bit uncomfortable to wear for the first time. However, you can get used to it depending on your tolerance. 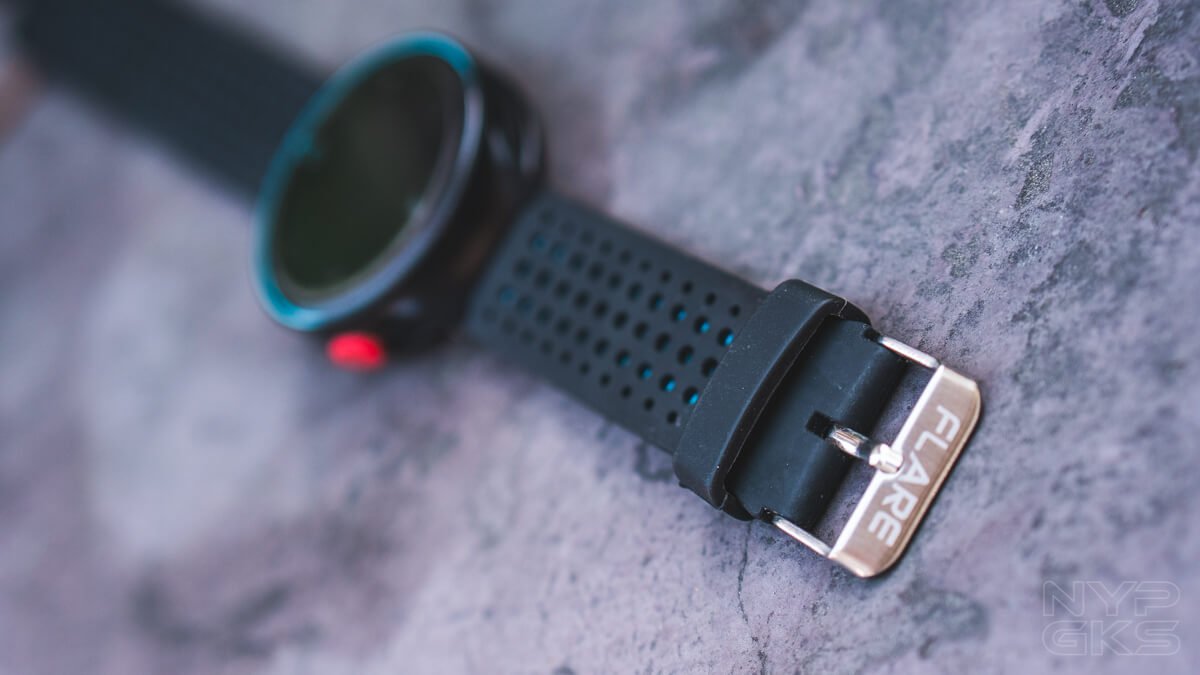 The Cherry Mobile Flare Sport’s watch face itself consists of a 1.04-inch OLED display. The screen projects images in color, which is great for the price. It also beams enough backlight for great visibility outdoors. Sharpness is also fine.

Now that we got some of the specifics out of the way, let’s talk about its actual features. For starters, the Cherry Mobile Flare Sport has a built-in pedometer that tracks your daily steps. It does work, however, I have noticed a lot of false counts. You could be sitting on your desk, or on a bus, and the watch would recognize a step every time you move your hands. Hopefully, a software update could patch it up. 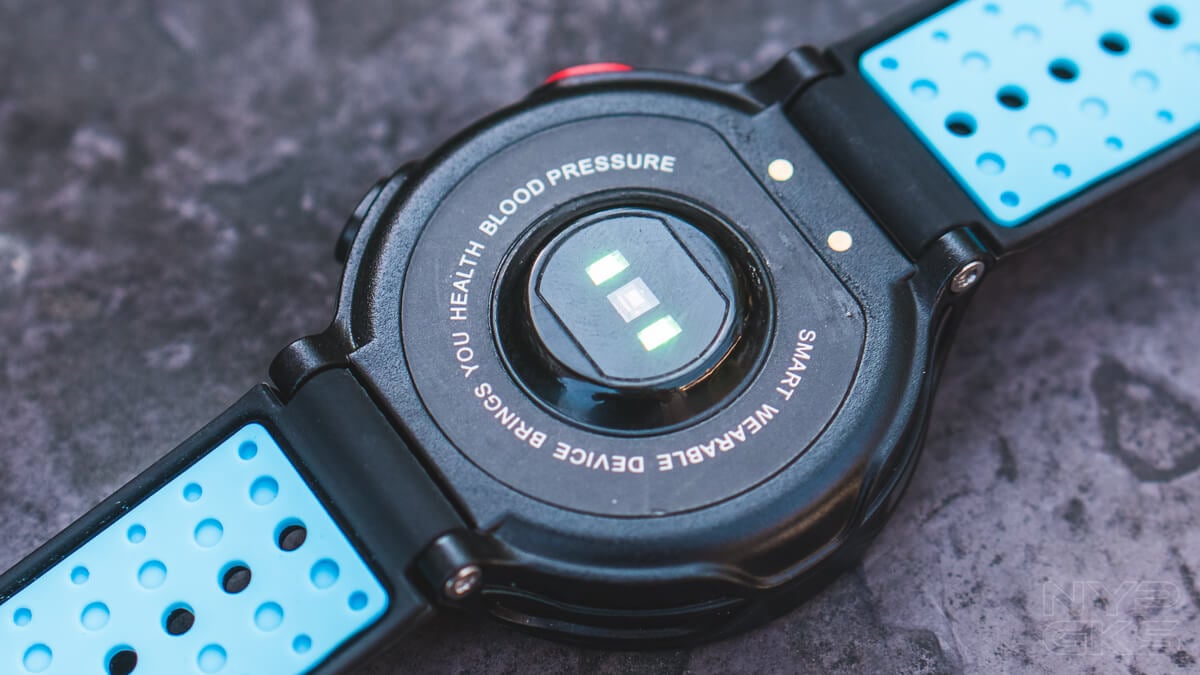 The Cherry Mobile Flare Sport also has a heart-rate sensor on the bottom, which helps the device do a lot of things. For one, it has a sleep monitor, which allows you to check your sleep quality within the smartphone app.

It also enables its workout and activity tracker feature. It can track your walking, running, climbing, cycling, swimming, football, basketball, badminton, and table tennis activities. It records your distance traveled, calories burned, and heart rate while doing those activities. 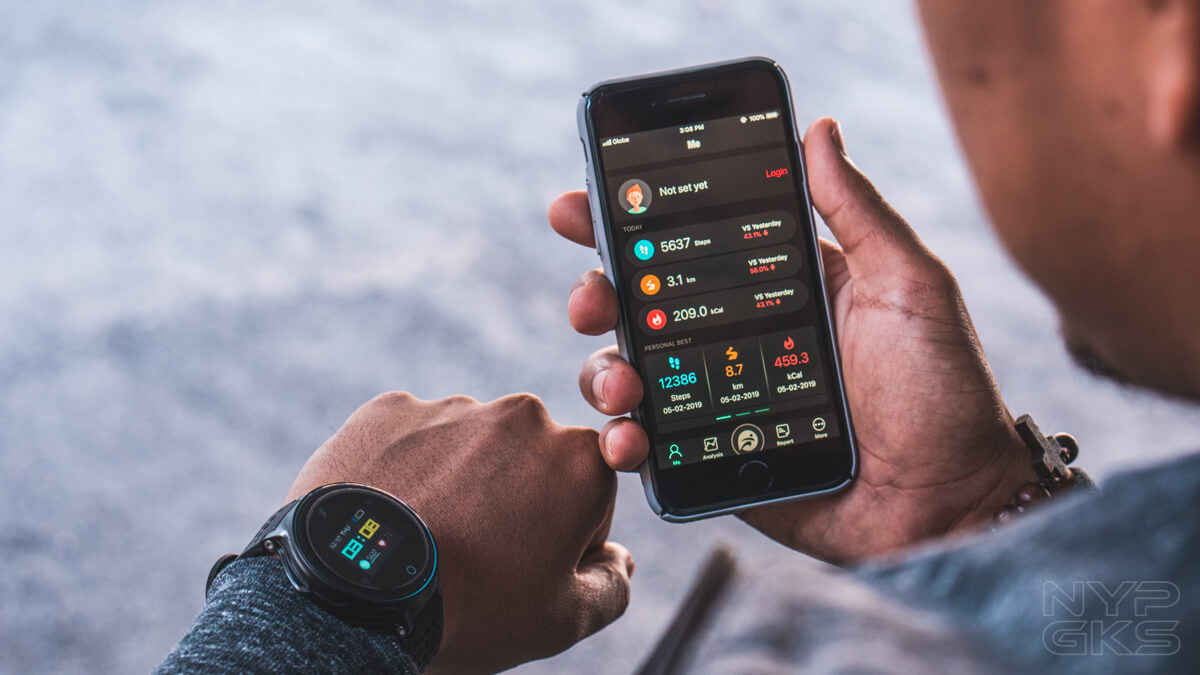 In the Cherry Mobile Flare Sport’s Health section, you can check your heart rate, blood pressure, oxygen, and sleep quality. The results they gather looks pretty accurate, although nothing beats real and more advanced diagnostic tools.

You can also read notification from this thing and see from what app they are coming from. However, it doesn’t show the sender in Facebook Messenger, which can be a bit annoying at times. 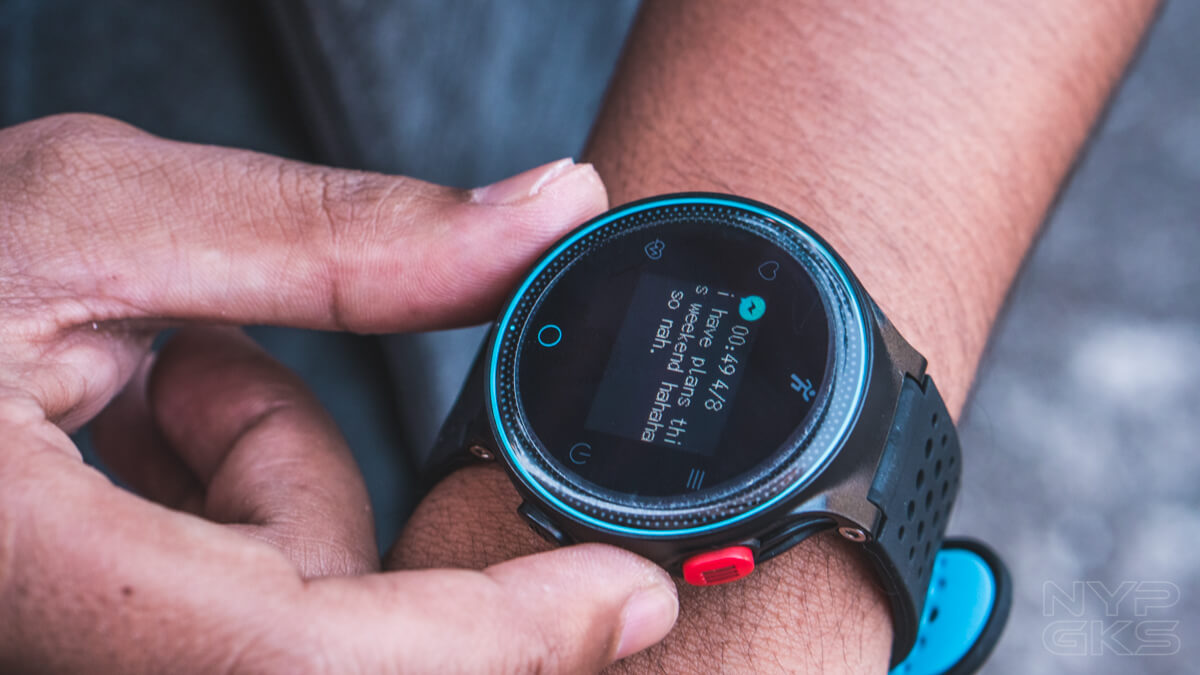 Cherry Mobile Flare Sport also has a Find My Phone feature, although it doesn’t really work well if the app is completely closed on your phone. A stopwatch feature is also present in case there’s a quick need for it.

Speaking of the app, the Cherry Mobile Flare Sport uses a third-party one, much like the Cherry Fit from 2016. The current wearable uses the Fun Do app, which is available on both Android and iOS.

The Cherry Mobile Flare Sport app gives you a more detailed look of your daily activities, steps, sleep analysis, workout, sport activity records, reports, and a slew of configurable settings. You can even sync your activity data with Apple Health.

You can also use the app to take pictures, with the watch acting as a wireless trigger. A Find My Device feature is also here and it sends a buzz on your watch so you can easily find it. 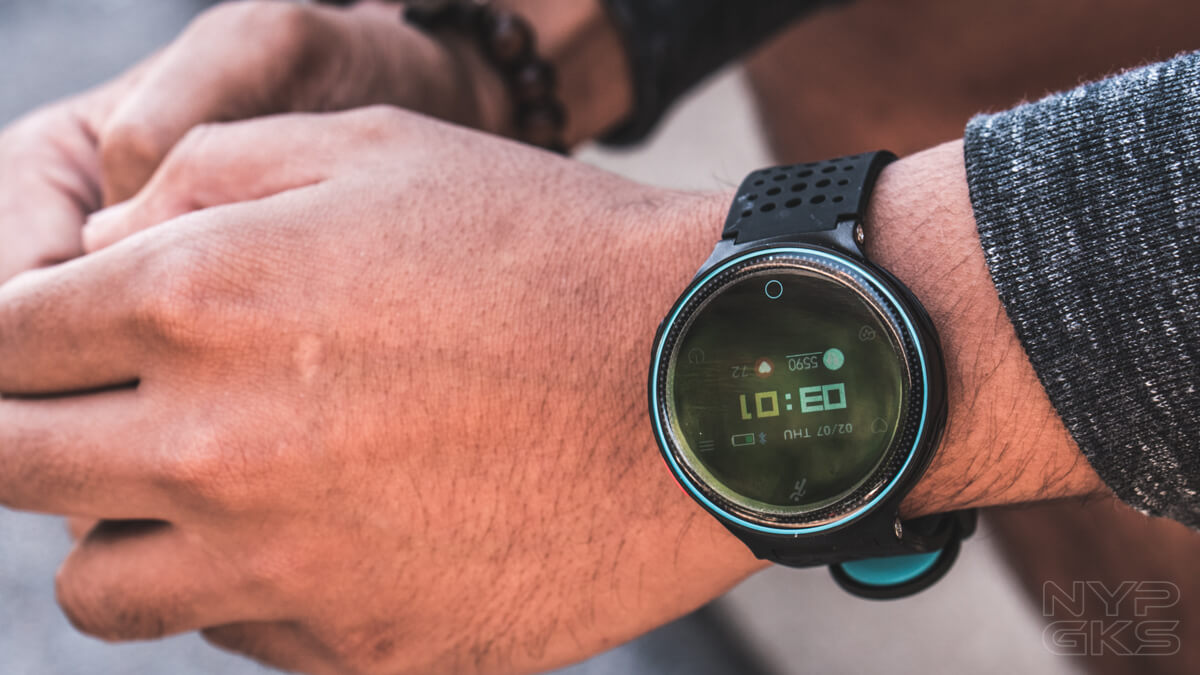 Probably one of the greatest strengths of the Cherry Mobile Flare Sport is its battery. This device can easily last you for a week, or more than that depending on how much you use its workout tracking features.

Cherry Mobile Flare Sport also recharges relatively fast with its proprietary charger. There are two contacts on top of the heart rate sensor on the bottom, which attaches to the charger via magnets. However, you might want to position it properly when charging as the magnets aren’t strong enough and a small bump can easily get it disconnected. 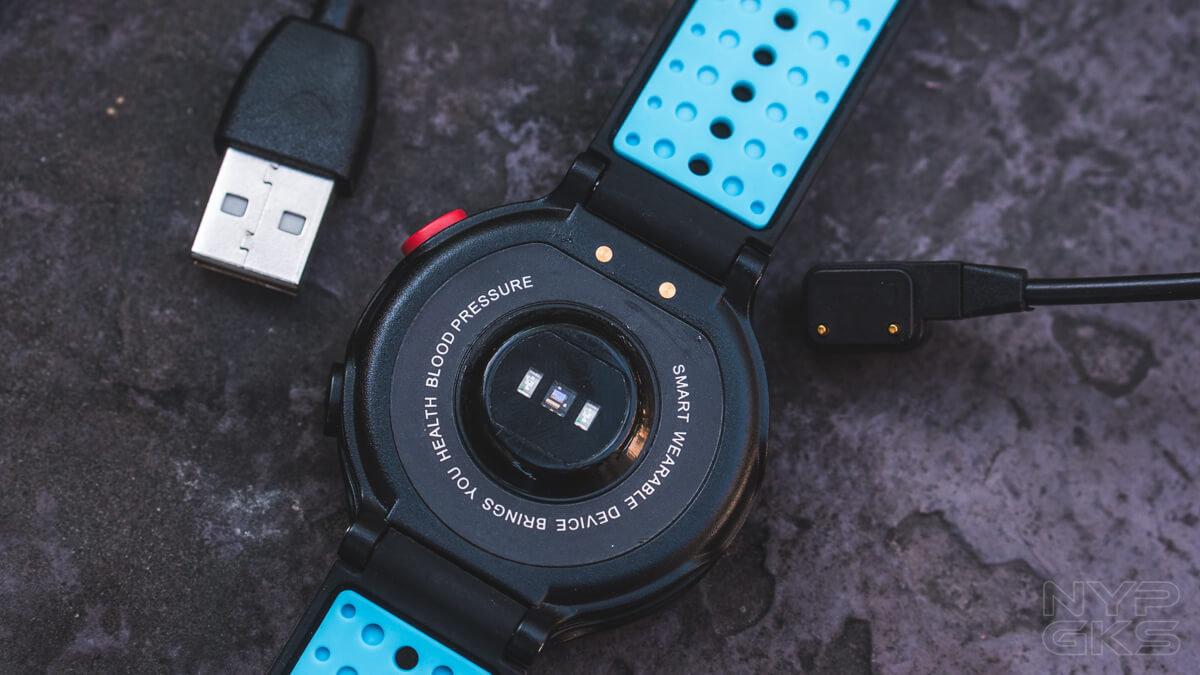 There are a lot of decent smartwatches out there at the sub-Php1k segment. There’s the popular Xiaomi Mi Band 3 and the Honor Band 4. While these smart bands are great, nothing beats a more realistic watch experience.

That’s what the Cherry Mobile Flare Sport tries to offer. Although it has a square display, the rounded chassis gives it a more acceptable watch appearance. Also, the colored and bigger screen estate makes reading notifications, viewing activity records, and what not more natural.

Cherry Mobile Flare Sport also has a really reliable battery, which puts a lot of Android smartwatches to shame. 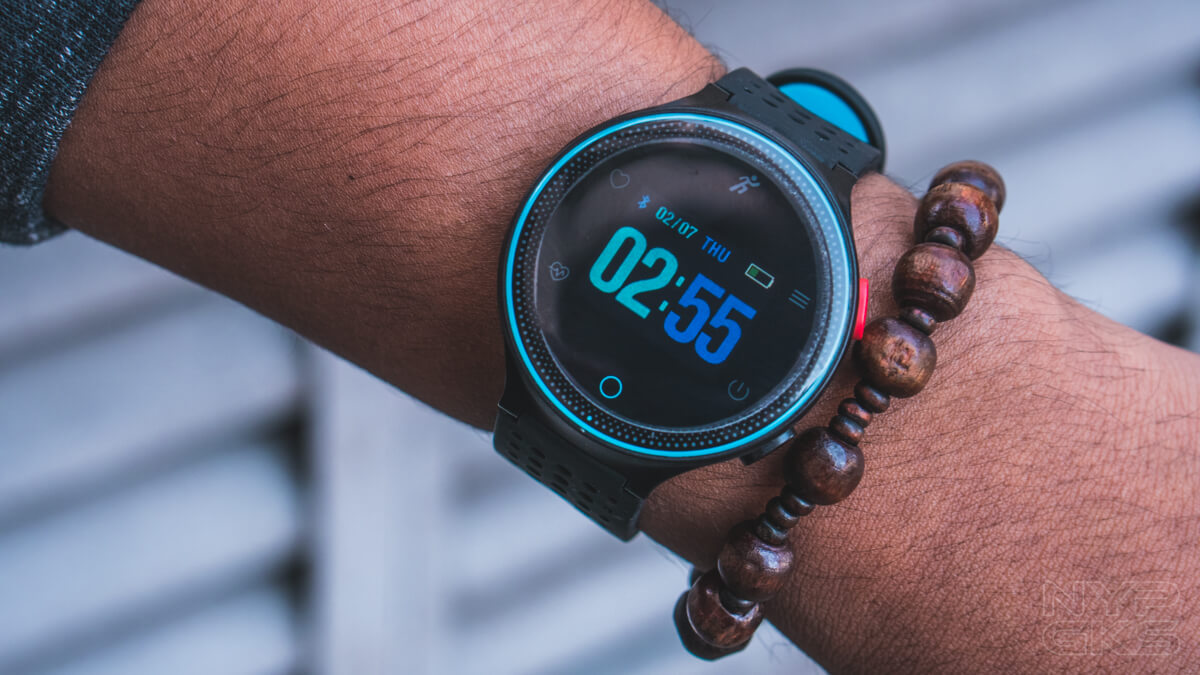 Even though the compromises caused by the price is understandable, I still wish that the watch is a bit more comfortable to wear. In addition, the unreliable step counter could have been better. And lastly, I wish Cherry Mobile just went with the slightly old, but more reliable, microUSB implementation for charging.

But still, for a price of only Php1,299, we’re convinced that the Cherry Mobile Flare Sport can entice a lot of people on finally entering the smartwatch game.