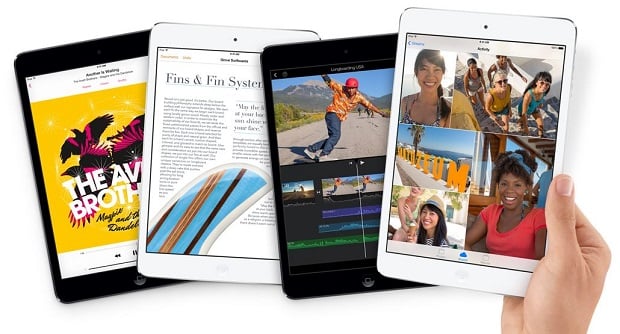 Despite newer tablets are rolling in, many people still prefer the iPad Air and iPad mini with Retina display announced way back in October. Are you buying a new Apple tablet today? Here are the official prices in the Philippines, along with prices from Globe and Smart telecom, for your perusal.

Available in Space Grey and Silver, both the iPad Air and mini 2 are sold online by Apple with a 24-hour shipping guarantee. They come with courtesy technical support via phone for 3 months since purchase, as well as a one-year limited warranty.

Globe only offers the Apple slates at up to the 64GB configuration, all of which are 4G-enabled variants. Tablet prices (which are to be added on top of the selected LTE plan’s monthly rate) under the 24-month contract period have 0% interest. The two-year monthly installment is only applicable to a contract with a two-year lock-up period; some credit cards will only process 12-month installment. Plan 499 offers 85 hours of LTE surfing, whereas Plan 999 promises unlimited bandwidth.

Note that the prices above include the tablet and Internet surfing fees, all locked under a 24-month contract period. Smart charges additional Php1,000 and Php5,000 one-time fees for the iPad mini 2 and iPad Air, respectively. All the LTE plans come with 65 hours of surfing on 4G and 3G, along with an anti-bill shock feature. Only up to 32GB models for both tablets are available.

Both telecoms are now offering the tablets at several of their stores nationwide. Head over to the source links below for more information.