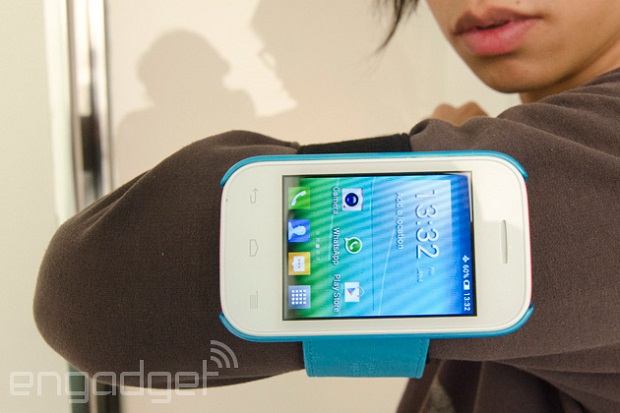 Alcatel has unveiled its latest smartphone that also functions as a wearable device. The Alcatel One Touch Pop Fit is a 2.8-inch device with entry-level specs.

Similar to the Cherry Mobile G1 as a phone in a smaller form factor, the Alcaltel One Touch Pop Fit does more by featuring fitness-tracking functionalities akin to the LG Lifeband and Sony SmartBand/Core. It comes bundled with an armband case (with four interchangeable covers of different colors included in the package) so users can “wear” it as they go around. It comes with certain degree of water resistance, so it can’t completely go under water.

The phone itself is nothing to brag about when it comes to hardware and performance. Running under the hood is a 1GHz dual core MediaTek processor and 512MB of RAM. Weighing 78g, this 3G-enabled phone also has a 2.8-inch touch display with QVGA (240×320) resolution, 2-megapixel camera, translucent flip cover, and JBL earphones. With low-end hardware like these, at least the 1000mAh battery should allow the device to run for some hours. Available internal storage is either 16GB or 32GB, which should be enough for music aficionados.

To cost around $120, the Alcatel One Touch Pop Fit will arrive in May.