MyPhone has unveiled its latest affordable smartphone, one that comes packing an octa-core processor. Meet the new MyPhone My32L.

There’s not much to tell about the MyPhone My32L in terms of unique features, but it’s a decent choice for a smartphone when you consider its price. We’re talking about a 5-inch handset running on Android Lollipop and offering a 720-by-1280 HD resolution. Its processor is clocked at 1.4GHz. Its main camera lets you shoot in 13-megapixel resolution and has autofocus and LED flash. Meanwhile, the front-facing camera does 5-megapixel shots. Dual SIM capable, the MyPhone My32L comes with 3G connectivity, 16GB internal storage and microSD expansion up to 64GB. 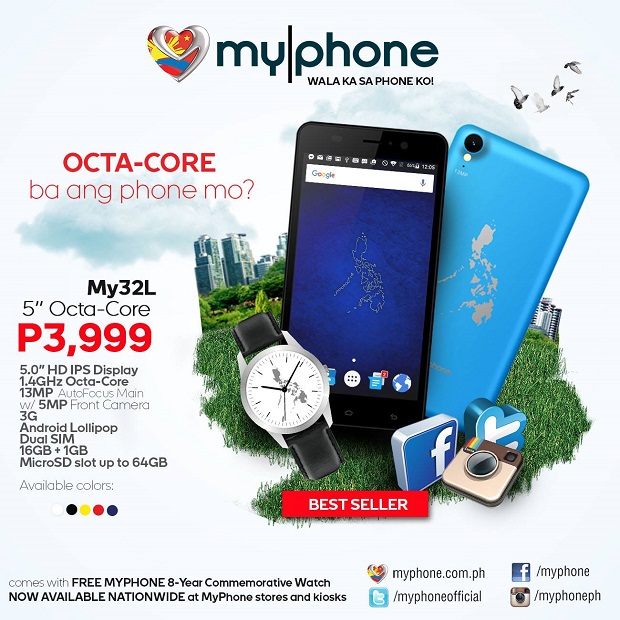 Related: The MyPhone My28 is Just Php888 from Smart, Comes with Free Data

Does the L in My32L stand for “lite”? This phone is basically the My32 in every aspect except in the amount of RAM it offers. The My32L comes with 1GB of RAM, whereas the regular My32 has double that amount.

The MyPhone My32L is now available nationwide for Php3,999. Color choices are black, yellow, red and blue. And to celebrate its eighth anniversary, MyPhone is including a watch for free. It’s most likely just a “dumb” watch, but it should be enough when you only need to check the time. Here’s hoping that some local company actually bundles a free smartwatch for every smartphone unit.