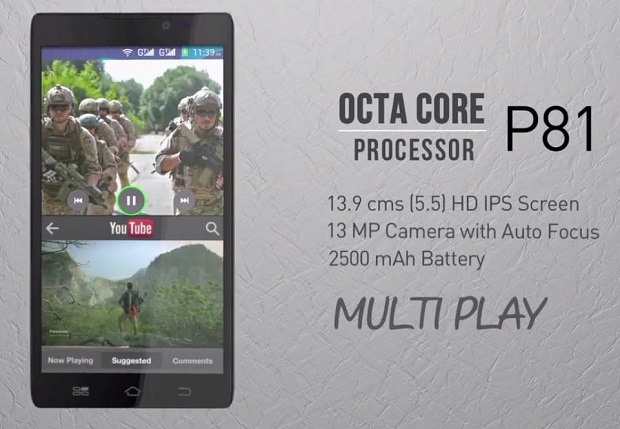 Panasonic has launched a new high-end phablet in India. Boasting an octa-core processor and a mid-range price, the new Panasonic P81 is now available for around Php14,000.

As a high-end device, the Panasonic P81 comes equipped with the octa-core MediaTek MT6592 processor clocked at 1.7GHz, along with Mali-450 MP4 graphics, and 1GB of RAM. In front of the device is a 5.5-inch display with 720-by-1280 (720p) resolution and a 2-megapixel camera. There’s 8GB of internal storage, with microSD slot expansion available.

The Panasonic P81 further employs a rear camera with a 13-megapixel sensor, f/2.2 aperture, and 28mm wide angle lens. It’s capable of recording 1080p videos at 30 frames per second (though you won’t see the output in its full high-definition glory with just the 720p screen). When it comes to outward design, the handset touts a black leatherette finish with metal accents for an exquisite look.

Finally, the Panasonic P81 offers a variety of connectivity features, including Wi-Fi 802.11 b/g/n, Wi-Fi hotspot, Wi-Fi direct, Bluetooth 3.0, GPS, and 3G HSPA+. Android 4.2 Jelly Bean runs out of the box. As disappointing that may be, the handset is promised a 4.4 KitKat upgrade. In the meantime, Panasonic implemented a few unique software tweaks in its custom Play Life UI. Multi Play, for instance, allows for multitasking and running of apps a la Samsung’s Multi Window mode, while the Smart Ringer provides a one-handed operation for answering of phone calls—a nice feat for a phablet this large.

The exact price for the Panasonic P81 is Rs. 18,990. It is currently available in India and pitted against the Micromax Canvas Knight (see MyPhone Infinity) and the Intex Aqua Octa (see Starmobile Diamond X1). A number of accessories are bundled for free, including a screen guard and flip cover.