Starmobile sure does know how to pique its customers’ interest, releasing juicy info about its upcoming devices bit by bit. Now that it’s only days away from officially launching, the company has revealed a more comprehensive list of specs for the Starmobile Diamond X1.

With dual-band WiFi, scratch resistant glass, and other specs listed below, the Starmobile Diamond X1 looks like an impressive phablet. It’s also one of the few local devices to feature OTA software updates, so hopefully it won’t stay in its default Android version for long. Users planning to upgrade to this phablet will appreciate the Starmobile SYNC app. 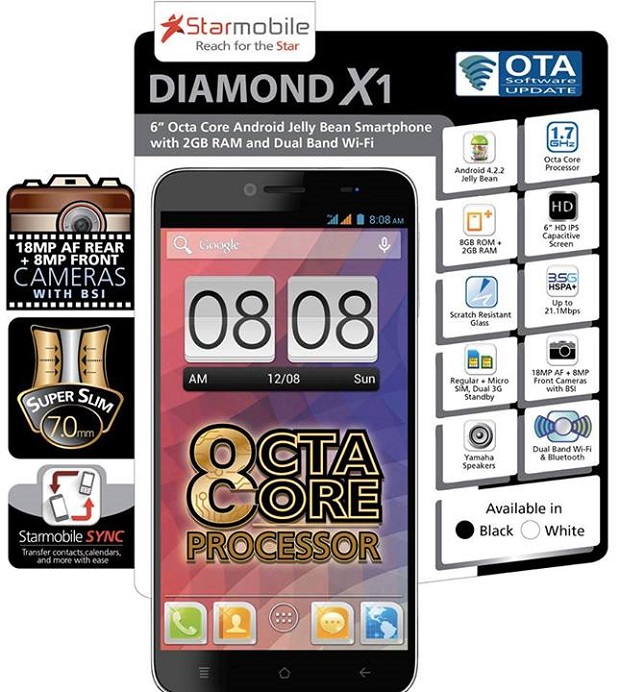 The Starmobile Diamond X1 is also notable for employing dual loudspeakers made by Yamaha, the music produced by which should be definitely louder and clearer than from other phablets. As a dual-SIM device, it uses one regular/mini-SIM and one micro-SIM, both of which have dual 3G and standby.

News of this first locally branded smartphone to tout an octa-core processor began appearing last month, but there wasn’t much known about the Starmobile Diamond X1 at the time besides its 6-inch screen and January release date. We learned a few weeks later how it fared in Antutu, as well as more about the specs.

The few remaining—and important—things still unknown about the Starmobile Diamond X1 are its battery capacity, price, and specific release date. Reports are suggesting a 2300mAh battery will come bundled with the device. Will this be enough for an octa-core phablet? We can’t be certain until we test an actual unit.

As for the price, expect it to go nowhere south of Php12,000. (I’m even being generous on that estimate.) Finally, Starmobile promised a January release, so an official announcement should be on the horizon. Available color variants are black and white.