The follow-up to the Starmobile Diamond D1 is now for sale. Aptly named the Diamond D2, it’s a 6.8-inch phablet that uses a dual-core MediaTek processor, qHD screen resolution, and 1GB RAM for Php7,990.

To start off, the most prominent feature of the Starmobile Diamond D2 is its gigantic screen size. The company claims users can “enjoy more screen time with this first-of-its-kind phablet’s widescreen advantage.” Indeed, there’s more screen real estate, but its low resolution translates to pixilation of visual elements. Small texts won’t be easy to read, slanted lines will appear jagged, and images won’t look smooth.

Yet another good thing about the Starmobile Diamond D2 is its build quality. The aluminum body comes with a premium look and feel, while textured back should help hold this unwieldy device. While it won’t win any titles for profile slimness, this phablet is still thin enough to fit inside a pocket or bag. 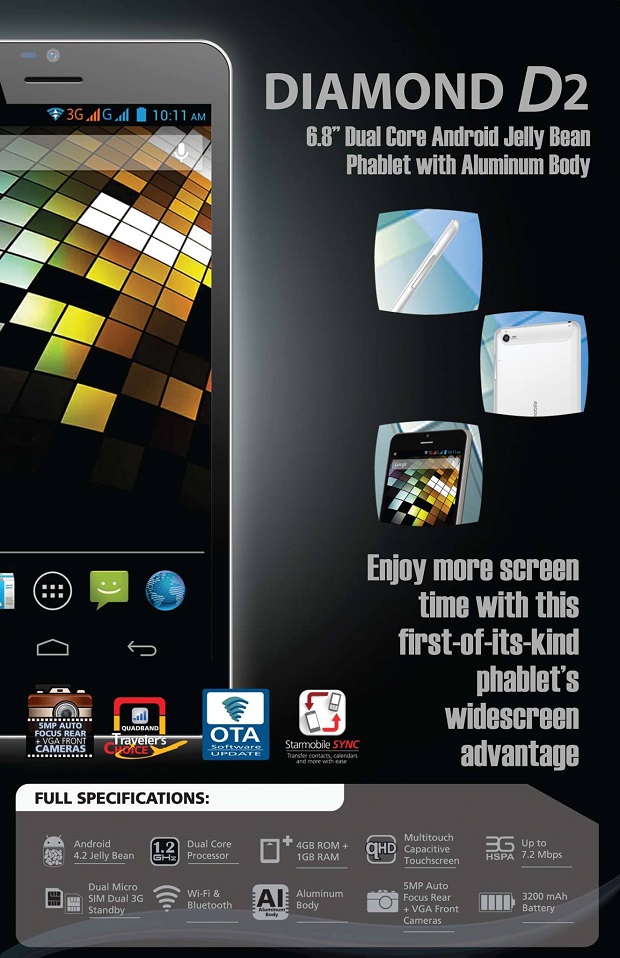 The Starmobile Diamond D2 also has dual SIM configuration, both of which are 3G-enabled and have standby. It’s also travel-friendly, largely thanks to it quad-band support. In other words, it’s likely to support several cellular frequencies across countries.

It’s also worth noting that the device comes with over-the-air (OTA) software updates, which means it won’t be stuck at running its preinstalled Android ROM in its entire life and can move to a more recent Android version once Starmobile has the upgrades ready to roll out. With Starmobile Sync, contacts, calendar appointments, and other data can be easily between devices.

Personally, the Php7,990 asking price for the Starmobile Diamond D2 is way expensive, especially when putting into account the low screen resolution, meager dual-core processor, and a battery that seems low for a phablet this big. But for those who insist on buying for its better features, this device is already available at dealers and retailers nationwide.