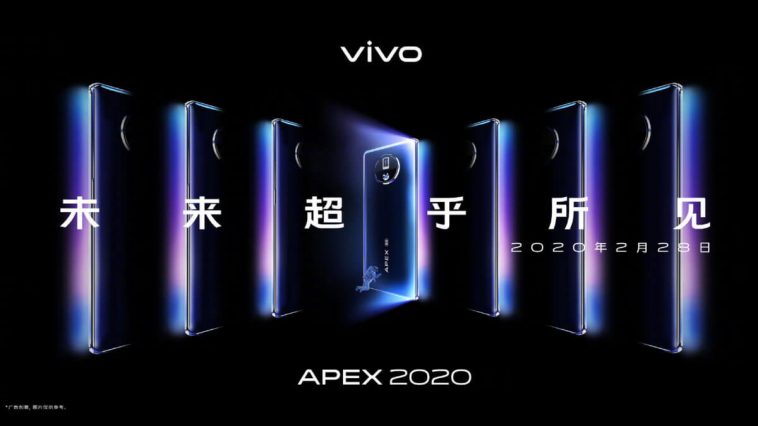 Vivo is used to showing off its advanced technologies in their Apex concept phones every Mobile World Congress (MWC) event.

The first-ever Vivo Apex phone was unveiled back in 2018, when they revealed a pop-up camera and in-display fingerprint scanner. Last year’s Apex has 5G support, no buttons, and no ports.

As you can see, it’s where we see cutting-edge smartphone advancements once a year. That’s why we’re really excited to see what the Vivo Apex concept phone for 2020 has to offer.

Even though MWC 2020 has been canceled, the company will still show people what it’s capable of making. Announced on Weibo, Vivo will be revealing the new concept smartphone this coming February 28.

Only high-end equipments are used in Vivo Apex smartphones, so we expect to see Qualcomm’s Snapdragon 865 on this one and probably up to 16GB of RAM. The poster below also shows that it has an edgeless display with 120Hz refresh rate.

Vivo says that it will feature a 48-megapixel gimbal camera. Whether they mean that literally or it’s just a marketing term, we still don’t know. It could possibly be hardware-based or just an improvement over typical optical image stabilization.

In addition, Vivo claims that it has 5 to 7.5x optical zoom. The camera setup is slightly reminiscent to a periscore camera, so we’re thinking that Vivo found a way to make them work together. Although Vivo’s Apex concept phone is not really a consumer product, it’s probably used as the skeleton for the brand’s flagship NEX series. Will these features make its way to future Vivo products? We don’t know yet but we’re hoping that they eventually would, regardless if it’s branded as Apex or another product line.