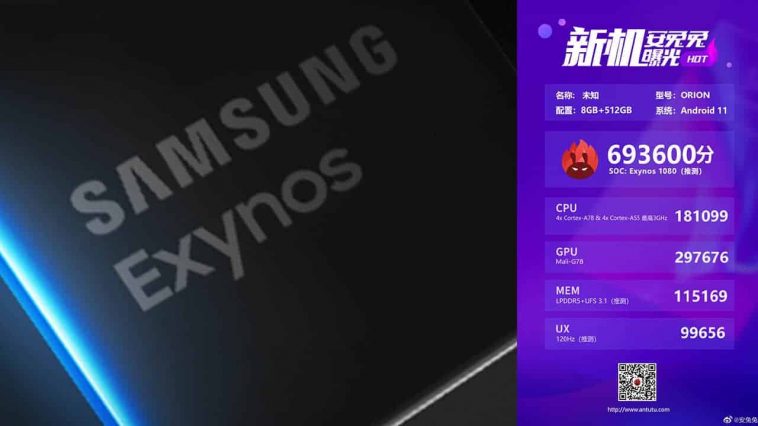 The upcoming Exynos 1080 is Samsung’s first 5nm chipset. It’s been briefly teased by the tech giant, but we’re yet to have the full details.

Well, not until now, as a mystery phone powered by the Exynos 1080 processor has been spotted in AnTuTu benchmark. The listing reveals that it has a clock speed of 3.0GHz and consists of four Cortex-A78 performance cores and 4x Cortex-55 efficiency cors. It also has a Mali-G78 GPU with unknown clock speed.

This AnTuTu benchmark was run on a mystery device with a codename ORION. No brand was mentioned either. What we know is, it has 8GB of LPDDR5 RAM, 512GB of UFS 3.1 storage, and what appears to have a 120Hz screen.

What’s interesting is, it got a whopping score of 693,600, beating the Snapdragon 865 Plus-powered ROG Phone 3, which dominated AnTuTu’s top list for August 2020.

The Exynos 1080 should also dominate in terms of gaming. As you can see, it got a score of 297,676 in the GPU department, beating the current title-holder, the Mi 10 Ultra, which is another Snapdragon 865 Plus smartphone.

No word yet as to when and where this processor will arrive. However, rumor has it that the Vivo X60 will have first dibs on this upcoming chipset.