Other than the huge number of smartphone manufacturers, chipset makers were also present at MWC 2018. One of them is MediaTek, which announced their new Helio P60 chipset.

As expected, this new processor will focus on AI. The new MediaTek Helio P60 chipset will have a dedicated AI processor called the NeuroPilot core.

This system will work with the existing Android Neural Networks API. With that, expect to see AI features coming in midrange smartphones this year. 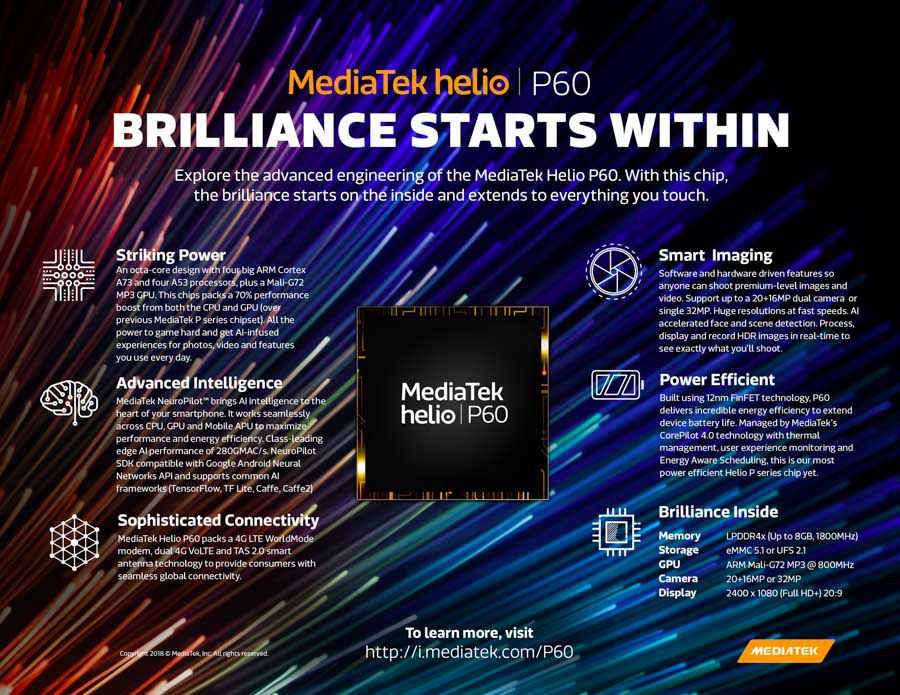 Aside from the NeuroPilot, the MediaTek Helio P60 also has four 2.0GHz Cortex-A73 and another four 2.0-GHz Cortex-A54 cores. And as per MediaTek, it will provide a staggering boost in performance by up to 70% when compared to the P30.

The chipset is also expected to deliver 70% faster performance on the graphics side, thanks to the new Mali-G72 MP3 GPU inside it.

MediaTek also equipped it with three ISPs for better and more efficient handling of dual-camera systems. And speaking of efficiency, its 12nm process makes it the most efficient P-series chip to date.

For a quick rundown, the MediaTek Helio P60 can support up to 1080p displays, 8GB of LPDDR4x RAM and UFS 2.1 storage. Other highlights include its LTE modem which can support Cat. 7 downloads and Cat. 13 uploads.