There has been less than 1% year-over-year decline in smartphone shipments in Southeast Asia. But despite that, a few leading players were still able to improve their number’s in 2017’s International Data Corporation (IDC) quarterly mobile phone tracker.

According to the research firm, there are approximately 100 million handsets sold last year. The decline in shipments was seen dramatically happening in Myanmar and the Philippines, which pulled the overall SEA numbers down.

The report also said that a lot of local players were hurt in this downtrend in smartphone sales. IDC points out that local brands might be losing to international manufacturers due to their competitive products that aim to shoot down their cheap prices. 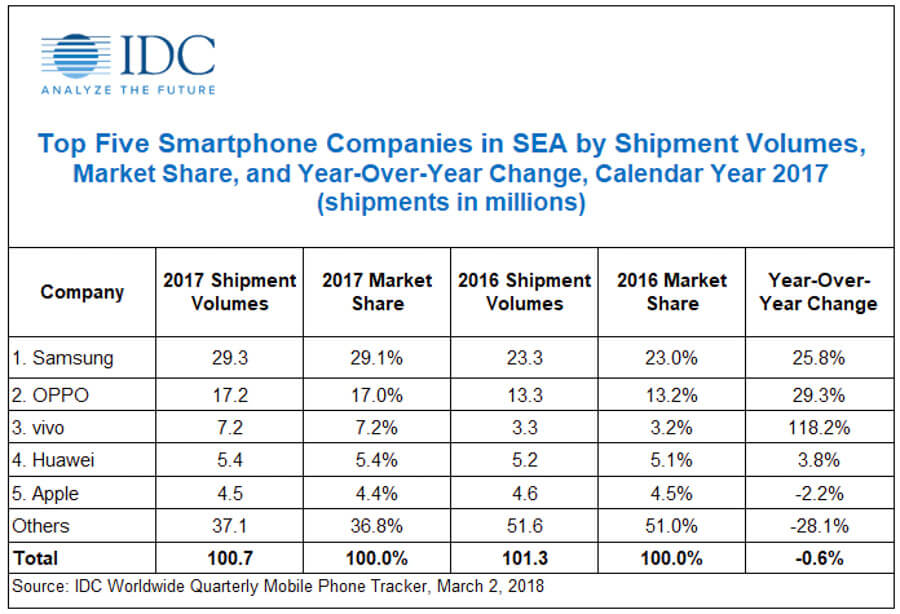 With that said, the top five smartphones companies was still led by Samsung. It is followed by OPPO, which has a year-over-year change of 29.3%.

The third spot was occupied by Vivo, who has an impressive YoY change of 118.2%. Huawei took the fourth seat with a humble yearly growth of 3.8%.

Lastly, Apple managed to get on the 5th spot. However, their YoY change is at a disappointing -2.2%.

Southeast Asian countries like the Philippines, Thailand, Indonesia, and more are considered as an emerging market. So, the IDC report says that the shipments in midrange smartphones actually grew by 53% in the last few years.

The improvement in wireless connectivity also bolstered the number of available 4G smartphones by 43%. IDC also noticed that phablets are starting to become a norm, which led to an increase in yearly shipments of 71%.