OPPO is set to officially introduce the OPPO R17 on August 18. On that date, they are also expected to reveal the R17’s bigger and more premium brother, OPPO R17 Pro.

There’s not a lot of details that came out regarding the rumored OPPO R17 Pro. Well, not until now. As its official announcement comes near, a few information about the device has started to leak online.

This first one came from GeekBench, a leading benchmarking app. A device with a codename “OPPO PBEM00” appeared on their site, which is rumored to be the R17 Pro. 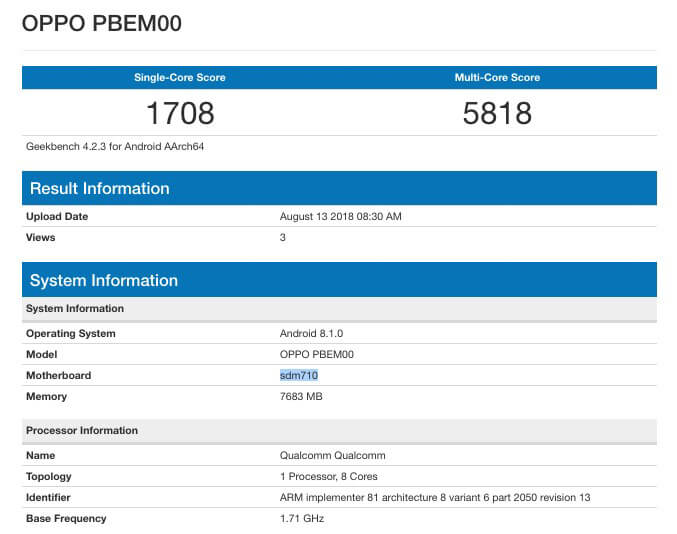 Alongside its 1708 single-core and 5818 multi-core scores, the GeekBench listing also showcased some of the key specifications of the said device.

There’s the new Qualcomm Snapdragon 710 octa-core processor that will be crunching the numbers, which is then clocked at 1.7GHz. It also has an 8GB of RAM and will run on Android 8.1 Oreo.

The processor could be one of the differentiating factors between the standard R17 and the Pro variant. The former runs on a Snapdragon 670 processor, albeit it has the same 8GB of memory.

Possibly another difference between the two is the cameras. A leaked poster of the OPPO R17 Pro reveals a device with a triple-camera setup on the back. But since none of this is official, we suggest that you take this information with a grain of salt.

But if the OPPO R17 Pro will indeed have three cameras on the back, we’re excited to see how it stacks up with the Huawei P20 Pro.

As stated earlier, the OPPO R17 Pro shall be revealed in complete detail on August 18. Until then, we’ll just have to wait and see.