The original Xiaomi Black Shark is already ripe for a proper update. While the Black Shark Helo had some more polished features than the alpha version, the fact that it still runs on the same Snapdragon 845 processor underwhelmed a lot of people.

But now, it looks like the company is almost done forging the sequel to its gaming smartphone. A device with a codename ‘blackshark AAA’ was spotted at GeekBench, which is expected to be the Xiaomi Black Shark 2, or whatever the company decides on calling this thing. 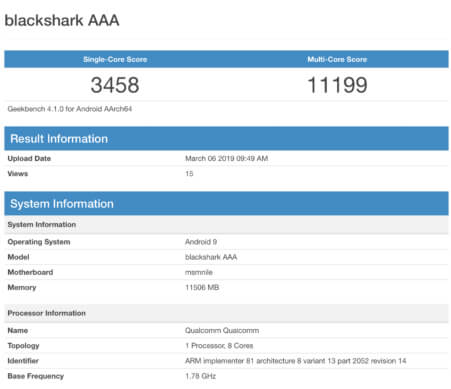 Since it’s a benchmarking app, GeekBench was able to reveal some of the key performance and hardware features that this device will have. For starters, the upcoming Black Shark 2 gaming phone will now feature the fresh new Qualcomm Snapdragon 855 chipset, a processor that’s powering most flagship phones in the industry today.

It will also boast a whopping 12GB of RAM, although there’s a chance that an 8GB model will be available for more flexible pricing rates.

Since we’re here, let’s talk about the actual benchmark scores. As for the single-core performance, the Black Shark AAA was able to pull off a score of 3516, while the numbers at the multi-core score is at 11413.

That score is pretty much identical to the leaked OPPO flagship device, which had a single-core and multi-core scores of  3810 and 10963, respectively.

The official release details for this device is yet to be known, although we expect to hear something from Xiaomi this Q2 of 2019.