Cherry Mobile has been really trying to bring something new and innovative in the market to not just gain competitive advantage, but also to bring spice to the line-up of available smartphones in the industry. The Cherry Mobile FB100 is a unique smartphone, solely because it’s meant for those who can’t get enough of Facebook.

Cherry Mobile seems to be too trigger-happy in bringing almost any kind smartphone concept on the table, and just wait and see if the consumers would like it or not.

And for today, we have yet another bizarre smartphone from the company, the Cherry Mobile FB100 – a smartphone that’s supposed to cater those people who cannot get enough of Facebook. With its price tag of only Php2,990, the FB100 is obviously in the budget category, a market for those people who aren’t really looking for any extravagant features for a smartphone and only spend most of their time on day-to-day activities and social media.

With that said, a Facebook-themed smartphone may possibly hit the sweet spot in this category. Can the Cherry Mobile FB100 find its place in this saturated sub-Php3,000 market? Let’s figure that out.

The Cherry Mobile FB100 is treated with the build quality its price asks for – all plastic. For this cheap, you should really expect nothing spectacular from the hardware department. The handset feels cheap, like what it actually is. However, the materials used made the device comfortably light, so that’s actually a good thing. The rounded corners and slightly curved back made it feel ergonomic to use. The FB100 is themed in blue, something to be expected for a smartphone that’s been inspired by Facebook. And it’s not only the color scheme that screams “Facebook” on this thing – Cherry Mobile also added a dedicated Facebook button, complete with the social media platform’s logo embedded underneath its plastic material that looks like an emblem. It does use on-screen buttons for its basic navigation, thus, the only use of this button is to quickly launch the Facebook app and lead you directly to the ‘New Post’window. The problem is, the Facebook button feels incredibly cheap when pressed because it’s quite mushy and wobbly.

Cherry Mobile FB100 does use on-screen buttons for its basic navigation, thus, the only use of this button is to quickly launch the Facebook app and lead you directly to the ‘New Post’window. The problem is, the Facebook button feels incredibly cheap when pressed because it’s quite mushy and wobbly.

Taking a tour, we have the large 5-inch HD IPS display together with the 5-megapixel front-facing camera, earpiece, LED notification indicator, and the dedicated Facebook shortcut button. 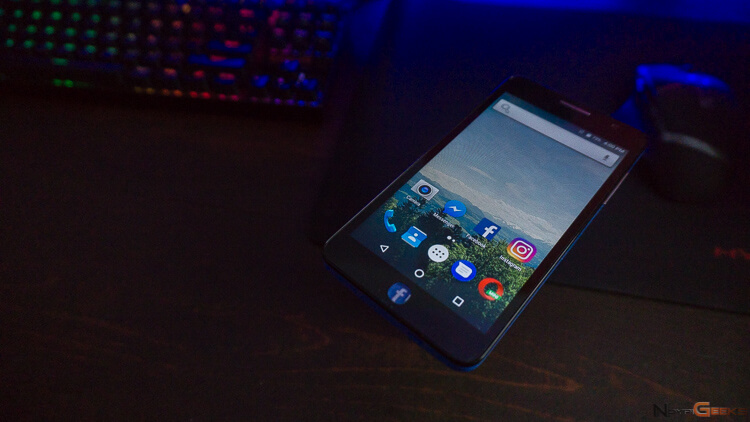 The right side has the lock/power switch, while at the right we have the volume controls. These buttons are definitely not the best of all; they are thin and not that protruded which makes it not tactile enough. 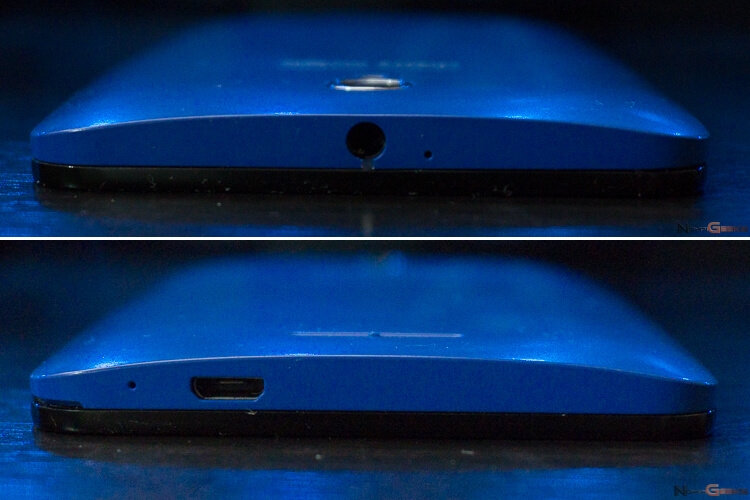 Turning the Cherry Mobile FB100 around, we have the 8-megapixel primary camera with LED flash, the inevitable Cherry Mobile branding, and the loudspeaker. The speaker’s performance is decent, but not something impressive to write about. The volume is just middling, clarity is not the best, the highs are ear-tingling while the lows are nowhere to be found. You might want to put some headphones on when consuming media on Cherry Mobile FB100 for a better experience. 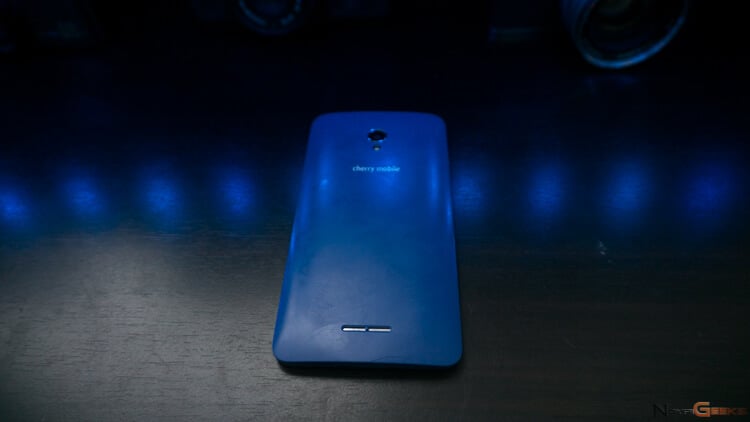 Popping out the back panel reveals the 2000mAh battery, two SIM card slots, and a microSD card slot. Overall, the aesthetics of the Cherry Mobile FB100 looks pretty interesting not because of the Facebook looks per se, but a smartphone tinted in Blue just looks refreshing. We’ve seen the Google Pixel and some Samsung Galaxy S7 handsets going with this color variant and they are really standouts. The CM FB100 is also a looker because of its bright blue paint job.

The Cherry Mobile FB100 has a 5-inch HD IPS display, which has a resolution of 1280 x 720, with a total of 294 pixels-per-inch. It was not long ago when a 5-inch display feels so enormous, it even belonged in the phablet category for a while. But now, it seems like 5-inch screens are the standard today. Almost all of the smartphones that are out today have the smallest size of 5-inches. Heck, they’re even making smartphones with 6.5-inches display on a relatively small body nowadays. 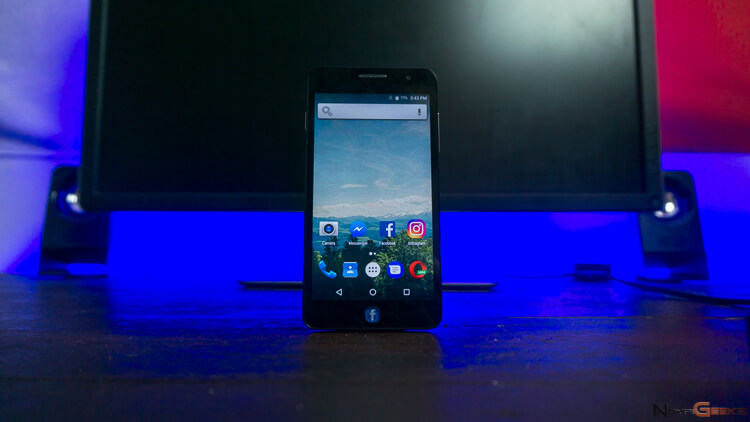 So going back. I was pretty impressed with the display quality on the Cherry Mobile FB100. I thought a 720p display wouldn’t suffice on a large 5-inch panel, but I was wrong. Not unless you’re looking at it on purpose, the pixels aren’t really that noticeable.

With that said, sharpness is really on point. Colors are really decent. Blacks are IPS-display deep. However, brightness is just on the average side. Using the device in broad daylight is quite challenging at times.

The CM FB100 comes equipped with a MediaTek MT6580 chipset that has a 1.3GHz quad-core processor, 1GB of RAM and Mali-400MP2 GPU. This specific chipset is probably the standard SoC used on a device with this caliber.

Processing performance is definitely not the most satisfying of all, but still gets the job done doing what it is intended to do. Everyday tasks can be done easily, but occasional hiccups are present – even the Facebook app would sometimes encounter a problem. Gameplay, on the other hand, is pretty good, but still not up to my liking. Real Racing 3 was decently playable, but with some drops in frame rates every now and then. While a processor-hungry game called Sim City: Build It was surprisingly playable.

The 1GB of RAM is undeniably small and it really shows at times. Multi-tasking is not really the prowess of devices like this. Sure, you can switch between two to three social media applications seamlessly, but jumping out of a game to a different app would cause the hardware to struggle. And that’s okay, the Cherry Mobile FB100 isn’t meant to multitask and game heavily anyway.

Another sad news about the Cherry Mobile FB100 is its tiny internal storage. In its 8GB of memory, more than half of it is already consumed by the operating System. That’s 4.26GB of unusable space, leaving only 3.74GB for the user to use. Having a storage this limited is really hard, and quite irritating when you try to download apps and the system keeps on giving you the “Storage Full, Delete Some Items First” crap. The good thing is Android Marshmallow supports ‘Adoptable Storage’ so you can store games and applications on the microSD card to save some precious space.

Overall, the FB100 hardware performs well for the price. Just set your expectations right and you’re all good.

The Cherry Mobile FB100 running on Android 6.0 Marshmallow. And just like most local devices, there’s nothing really much to say about the interface’s looks. Because unlike most international brands, this smartphone is not skinned to the bones. Thus, leaving only a full and stock Android experience – with some bloatware. 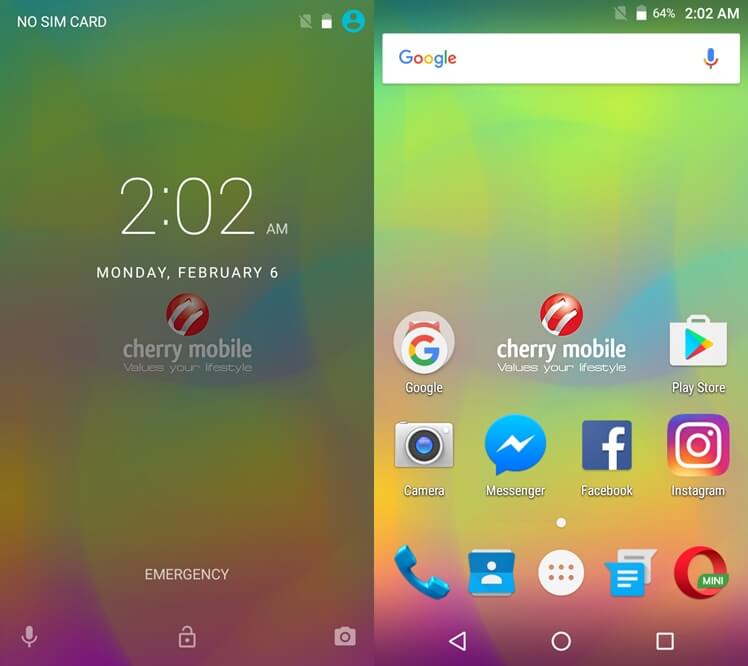 Android 6.0 Marshmallow is great and it’s nice to see it run this handset. With that said, let me now just cite some things that I didn’t like on its UI.

First, the on-screen buttons of the Cherry Mobile FB100 still have the third switch toggled for opening the Menu, instead of activating the Recent Apps tab directly. Next, the Facebook shortcut button only works when you’re on the home screen. It would have been nice to see it work wherever you are on the device. Also, I always mistook it as a home button, but after a few days of use, I eventually got used to it. Lastly, just like in my previous Cherry Mobile reviews, I hate that they are pushing advertisements on the notifications tab. 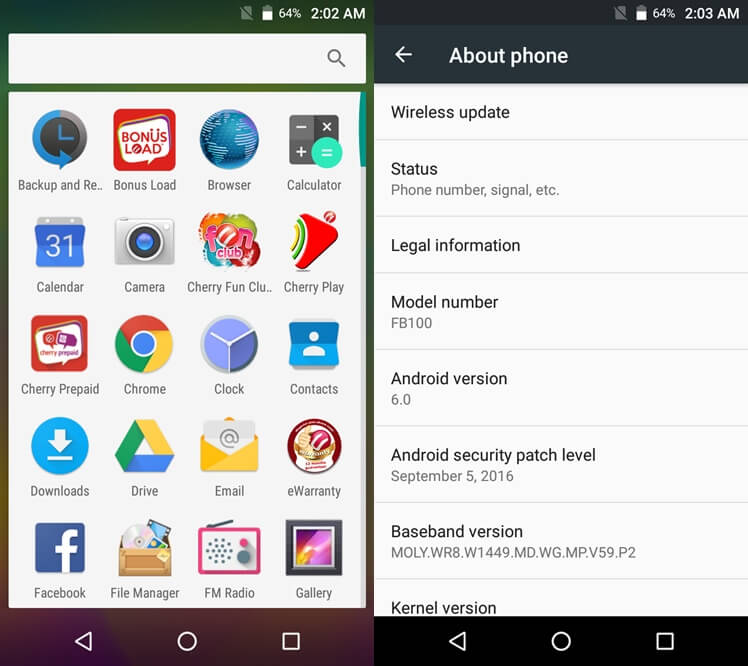 And basically, that’s everything with the Cherry Mobile FB100’s interface. The simple and straightforward software compliments the overall theme and purpose of the device.

There are 8-megapixel primary and 5-megapixel front cameras on the Cherry Mobile FB100. The set of shooters that are present on this is exactly what we’ve expected from a device in this category. That means that the camera quality is nothing special.

The camera at the back of the Cherry Mobile FB100 can surely take good photos for as long as it is partnered with good lighting. Colors are pretty acceptable, contrast is decent, sharpness is just middling and the dynamic range is also in the middle of the road.

Shooting in low-light makes the sensor struggle a bit. Images taken can be a little blurred, the Auto White Balance gets confused a little, and of course, noises and grains are inevitably present.

The 5-megapixel front-facing camera can also take decent images. However, I noticed that the selfies that I took appear to be a little soft, even with the Face Beauty Mode software enhancement turned off.

The Cherry Mobile FB100 comes equipped with a limited amount of connectivity options. It’s actually not that surprising, especially when you consider its cheap price tag. The phone only has WiFi 802.11 b/g/n, Bluetooth 4.0 and 3G.

Unfortunately, there’s no support for 4G LTE connectivity. Now I know that’s really too much to ask, considering how budget-friendly this device is. But I believe that having a fast internet connection is just fitting for a device that’s marketed to entice people who are crazy about their social media life.


But nonetheless, the 3G connection was still able to do its job. Also, both of the Bluetooth and WiFi connection didn’t show any signs of problems as I was able to connect the Cherry Mobile FB100 with my wireless Bluetooth speakers and my home wireless network seamlessly.

Call quality is also decent and I can clearly hear the other end even when I’m in a slightly noisy environment. The volume coming from the earpiece is loud, but call clarity is a bit so-so sometimes. Not much to report here, as texting and phone calls work as expected.

The Cherry Mobile FB100 has a pretty small battery inside. The device is being powered by a 2000mAh capacity which is not that bad considering its low power setup. 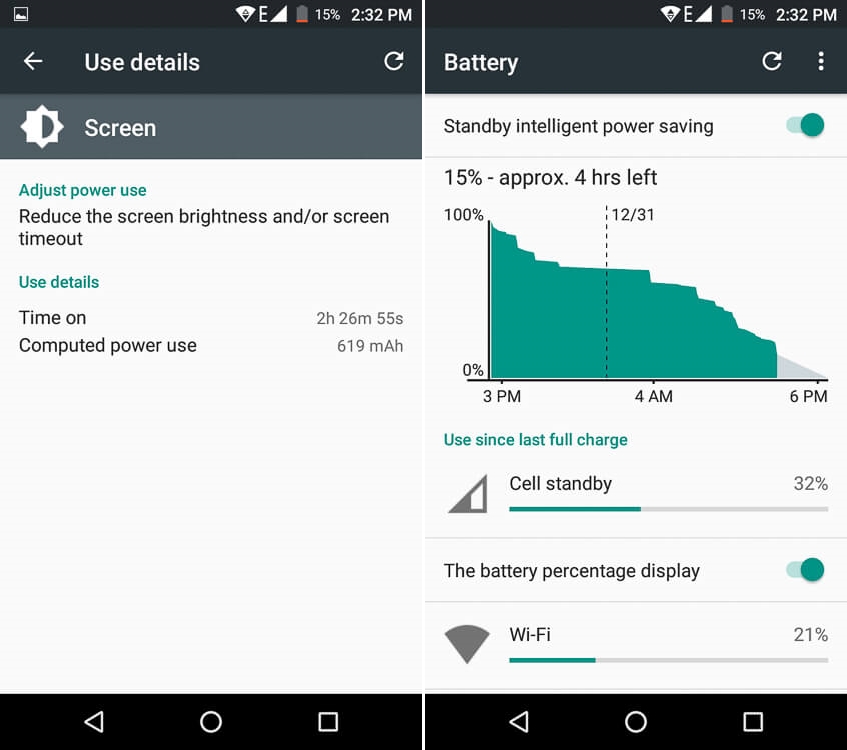 However, the battery longevity of the Cherry Mobile FB100 wasn’t really great. Screen-on time lasted for only two hours and a half, and those are only a few hours of heavy internet browsing as well as making and receiving calls. The device may also last you a whole day, depending on your usage. But for most people, I think a power bank would come in handy in case you plan to stay online throughout the day.

As what I’ve said in the introduction, the Cherry Mobile FB100 feels like an experimental device more than the birth of a new series from the local company. But as I’ve spent a good amount of time with the device, my impression about this smartphone changed a bit. 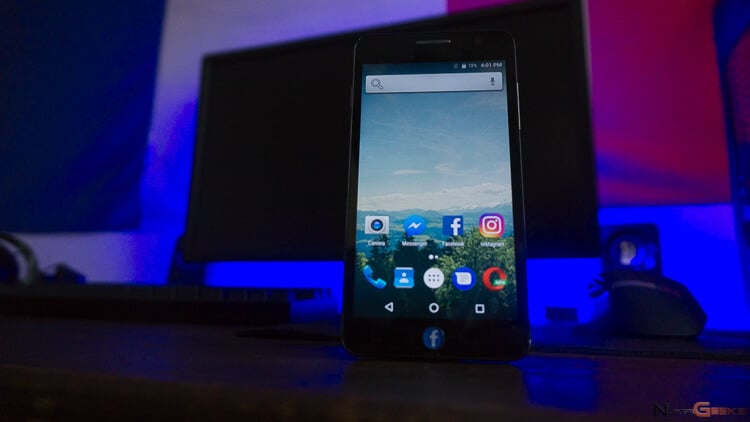 The Cherry Mobile FB100 is a decent smartphone. And I think, the reason behind building a “Facebook-centered” device is just a marketing stunt to attract a lot of people. I have to say that it’s quite effective because this price range is literally filled with tons of other options. Distinguishing itself from the rest is probably its best chance to sell.

Other than the Blue theme and the Facebook shortcut button, there’s really nothing new with the Cherry Mobile FB100. However, the company did get almost everything right with this Php2,990 handset. The display is impressive, the processor is powerful enough for its purpose and the camera quality is acceptable.

On the other hand, the cheap build quality was expected, the poor battery life is adequate. However, it would’ve been a lot better with 4G LTE connectivity onboard.

But overall, this thing is still a good device. If you spend most of your time on Facebook or you’re just looking for a device that’s worth the penny, this is worth checking out. The Cherry Mobile FB100 is currently available on all CM stores, kiosks, and authorized resellers nationwide for only Php2,990.