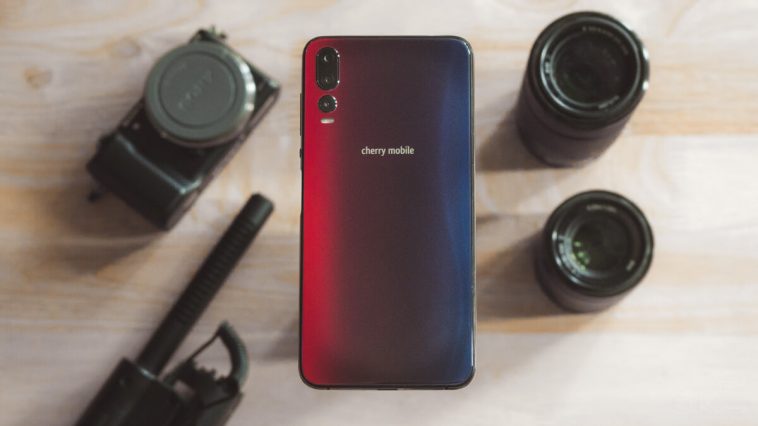 Just like all the devices that it is going up against, the Flare X3 has its multi-camera setup as its main highlight plus other sets of features that should be worth your time and money.

But the question is, how does it really perform in real-world scenarios? That’s what we want to find out in our Cherry Mobile Flare X3 review.

The Cherry Mobile Flare X3 was put out to impress, and it’s dressed like it. It features a color gradient design on the back, with a magenta color on the far left that transitions to black and purple to the right. This Twilight Purple model is the only color option available, which is a bit disappointing. On the upside, it looks really sleek and stealthy.

By the way, this back panel is made of glass-like plastic material. It looks really shiny and premium, but it does attract hairline scratches over time. Slapping the included clear case should be the best idea, as it also allows you to appreciate the design while protecting it. The entire Cherry Mobile Flare X3 body is being held by a metal chassis.  The sides are surrounded by a shiny material, although it appears to be a coating just to make it look like stainless steel.

What we really like is the hardware placed on the right side. There’s a rounded lock/power button with circular etchings on it. It mimics the actual shutter button from point-and-shoot cameras, paying homage to the Flare X3’s photography-focused nature. We also have the side-mounted fingerprint scanner in here. It allows for a cleaner design on the back since it doesn’t have an in-display sensor. It’s easily reachable by your thumb if you’re holding it with your right hand, or with your index finger if you’re left-handed.

Meanwhile, we only have a hybrid SIM tray on the left side. On the top, there’s the 3.5mm headphone jack while at the bottom is the USB Type-C (thankfully) and two speaker grills. The one on the left side is the actual speakers, while the built-in microphone is on the other.

The front of the Cherry Mobile Flare X3 is filled with the 6.18-inch FHD+ IPS display, with a thick notch on top that houses two cameras and the earpiece. The side bezels are noticeably thin, although the chin is a bit thicker. On the back, we have the triple camera setup. The first enclosure houses the 12-megapixel primary camera and another sensor, while outside the first pack is yet another camera. It’s hard to tell which between the last two are the monochrome and depth sensors. Below all three cameras is an LED flash, while in the middle we have the Cherry Mobile logo. Overall, the design of the Cherry Mobile Flare X3 is quite good. It looks really chic with clever button placements. However, it feels a bit thicker and heavier than some of the competition.

As stated earlier, the Cherry Mobile Flare X3 features a 6.18-inch FHD+ IPS display, with a resolution of 2280 x 1080 pixels and ~408ppi. It has a tall 19:9 aspect ratio, just like most smartphones right now, and the company is branding it as “TrueView”. The notch on the top is not so bad and distracting since we got used to it thanks for Apple making it mainstream with the iPhones. Although I would still prefer the smaller ones, like the waterdrop notch on devices such as the Huawei P30 Lite.

But nonetheless, the actual display quality of the Flare X3  is fine. The sharpness is great and the colors are good. The size is just right for productivity and gaming. It may not have the brightest display panel around, but it is still visible outdoors.

The Cherry Mobile Flare X3 is powered by a MediaTek Helio P60 octa-core processor. We’ve seen other devices that have a more powerful chipset, although we still appreciate that this one comes with 6GB of RAM and 64GB of expandable storage. Basic and day-to-day tasks were doable seamlessly. Thanks to its spacious memory, apps load fast, ran fast, and you can switch between them without breaking a sweat.

The gaming experience on the Cherry Mobile Flare X3 is also good. PUBG Mobile, NBA 2K20, and Mobile Legends ran at medium settings with decent frame rates. It may not be the smoothest experience for the price, but it will do.

The Cherry Mobile Flare X3 runs on Android 9 Pie, with a bizarre interface. Actually, the UI is not so bad. It’s stripped-down and straightforward that really looks like stock Android. Although, there some minor changes in the looks and some of the buttons that are not very Android-like. Bottom line is, the UI is fine and intuitive. It’s surprisingly more convenient to use than the other manufacturer-made skins that brands incorporate in their smartphone since this one is cleaner.

The keyboard is easy to type on, the drop-down notification and control center is neat, and the settings menu is well-organized. You can also easily access the app drawer by swiping down-up from the home screen. However, I do wish that the camera app is more intuitive and easier to use.

As I said earlier, the main highlight of the Cherry Mobile Flare X3 is its cameras. But from what it looks like, the company only upped the camera count to make it interesting. The Flare X3 sports a total of five cameras — two on the front and three on the back. The 12-megapixel primary camera produces decent images in good lighting  — with acceptable colors and contrast. However, you start to see grains and noises in low-light and indoor scenarios.

I also noticed that it would sometimes struggle to find focus if you have a small item as a subject. Say, you’re taking a picture of a flower or a small toy.

The depth-sensor also has done a decent job of isolating the foreground from the background. It provides a believable depth-of-field effect that you only get on a professional camera.

There’s also a dedicated 5-megapixel monochrome camera. However, there’s no option in the camera app to use it. Meanwhile, the 20-megapixel front-facing camera takes good selfies. It’s still not the most vibrant photos of all, but the details it captures give you plenty of room to work with in editing. Also, the depth-sensor lets you blur out the background for a professional look, or if there are any distractions behind you.

The camera department should be the Cherry Mobile Flare X3’s biggest strengths. Let’s just wait and see if the company can improve it via a software update.

If there’s one thing that the Cherry Mobile Flare X3 got completely right, its the connectivity features. The device comes with all the dated antennas that you can find on smartphones today. There’s the dual-band WiFi 802.11 ac, Bluetooth 5.0, and 4G LTE — all of which provided fast and reliable connections.

The Flare X3 also sports a USB Type-C port, which allows you to use the same cable that you possibly have on your laptop and other devices.

Just like most smartphones, the Cherry Mobile Flare X3 has a 4,000mAh battery. But unlike most of the competition, its actual performance is a bit disappointing. Smartphones like the Huawei Y9 Prime 2019, who are in a neighboring price range and also has a 4,000mAh battery, had an average screen-on time score of 13 hourrs in PCMark’s battery test. This app plays simulated tasks on a loop until the battery goes to 20%.

We ran the same test on the Cherry Mobile Flare X3, with the brightness and volume set to 50%, and it only got a score of 7 hours and 54 minutes. Cherry Mobile could still do some performance optimizations to improve battery life. But we can only hope that the company will roll out a software update soon.

The Cherry Mobile Flare X3 is undeniably one of the most interesting smartphones that the company has come up in years.

It has a distinct design, capable performance in gaming, and a roomy 6GB of memory for productivity.

The Flare X3’s large display is not too shabby either, despite the thick notch on top. Plus, the clean user interface is really intuitive to use. While it may be one of the best smartphones that came out from Cherry Mobile, it fails to compete with a lot of other devices from other brands. We’ve seen other similarly priced devices with better cameras and has longer battery life.

To wrap it up, Filipino who have been a big fan of Cherry Mobile for years are in for a treat with the Cherry Mobile Flare X3. However, if you don’t mind looking over the fence, there are other great alternatives out there.

Cherry Mobile Flare X3 pricing and availability in the Philippines

The new Cherry Mobile Flare X3 is now available in tons of Cherry Mobile stores and kiosks across the Philippines for a price of Php9,999.