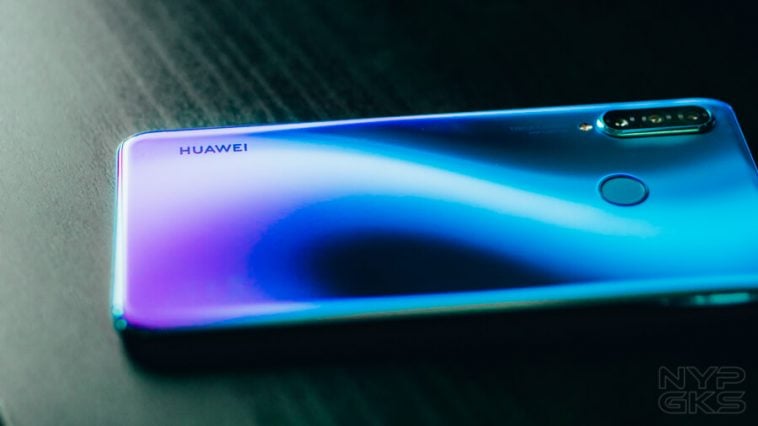 I’m pretty sure you’ve already heard that Huawei is currently in hot water due to the ban implemented by the US government to them.

A lot of Huawei’s supplier partners have said that they will be parting ways with the company, which is a huge shame considering that Huawei, being the second biggest smartphone brand in the world today, is also one of their top clients.

Huawei was able to achieve their success thanks to their value-oriented smartphones, including their latest midrange release, the Huawei P30 Lite, which we’ll be taking a closer look at today.

Since it belongs to the P30 line-up, the Huawei P30 Lite inherits the looks of its bigger brothers. It has an identical shiny back panel, with the Peacock Blue model that we have here sporting the familiar blue and purple color gradient. The device is also available in Midnight Black and Pearl White models. You can also see the triple camera setup on the back. They are in a vertical orientation with a noticeable camera bump that’s similar to the P30 Pro.

Besides its great looks, the Huawei P30 Lite feels incredibly nice in the hands. It’s really lightweight at only 159g. Also, its curved corners and depth of only 7.4mm makes it comfortable to hold. Right on the front, you can spot its tall 6.15-inch FHD+ IPS display, the dewdrop notch, and ultra-thin bezels on both sides. Although the chin is slightly thicker to accommodate the controllers for the IPS panel.

A hybrid SIM card tray and a noise-canceling microphone can be found on the top, while down below you can see a headphone jack, USB Type-C, primary microphone, and the loudspeaker.

On the left corner, we have the lock/power switch and the volume controls, while the opposite of that is clean. The physical buttons do feel cheap but still feels relatively satisfying to press.

Midrange smartphones are starting to look premium (at least physically) every time we see a new one, and the Huawei P30 Lite is another evidence to that. The dimensions of the screen are just the perfect size. It’s large enough to provide enough room for productivity, but not too enormous to feel bulky.

The Huawei P30 Lite’s screen backlight can make it still visible even in sunny outdoors, but at the same time it can be dark enough to be comfortable in the eyes while you’re social media browsing before going to sleep. Its Full HD+ resolution can make images look well-detailed and small texts nice in the eyes. However, the color quality feels a little lacking.

Smartphones always try to be your ultimate multimedia device, which is why MP3 players and iPods are not popular anymore. But if you’re a real audiophile looking for a high-fidelity companion, the Huawei P30 Lite may not cut it for you. Huawei’s move to keep the headphone jack is appreciated. It delivers good sound quality, but may not satisfy your expensive taste. It comes with a built-in equalization software, which allows you to tune the bass and treble levels depending on your taste.

Meanwhile, the bottom-firing loudspeaker only provides mediocre performance. The volume is a little low and the clarity is on the downside. It’s good for personal listening, but it might be lacking for a group of people.

We’re seeing an interesting development in the midrange category. These under-Php17k smartphones, like the Huawei P30 Lite, are starting to get 6GB of RAM, which is more than enough to handle all your multitasking and everyday needs. The generous memory comes with the indispensable Kirin 710 octa-core processor, 128GB of expandable storage, and a Mali-G51 graphics pumped up with GPU Turbo 2.0.

Huawei P30 Lite’s roomy 6GB of memory sure helps in multitasking, although the Kirin 710 is starting to feel a little old. Using basic and commonly used apps as Facebook and Instagram feel fast, although you can feel some occasional stuttering when a lot of apps are in the background.

But thanks to Huawei’s GPU Turbo technology, the gaming performance on the Huawei P30 Lite was a bit better. You can play NBA 2K19 and Mobile Legends smoothly at high settings. Meanwhile, PUBG Mobile settles at Medium graphics settings with a playable frame rate. Just like the older versions, EMUI 9 is still one of the convoluted Android skins in the market. But once you get the hang of it, you get to appreciate everything that it comes with it.

The app icons, buttons on the control center, and other elements on the interface were drastically redesigned from the stock-Android look. The Huawei P30 Lite lock screen looks neat. All the apps are laid out on the home screen, although you can enable the app drawer from the settings menu. Swiping from the far left of the screen shows the HiBoard that shows most used apps and a search bar that can do local and internet searches.

Android Pie-native apps like Notification Dots are here. There’s also the Digital Wellbeing, which gives you a look at your smartphone habits and lets you act upon it. The Huawei P30 Lite uses a custom SwiftKey keyboard that’s intuitive to type on. And a camera app that compliments the device’s photography features.

In-display fingerprint scanners are starting to become a norm in midrange smartphones today. But, Huawei wants to keep it plain and simple for the Huawei P30 Lite as it features the traditional, rear-mounted one. Huawei P30 Lite’s scanner is really fast and accurate, which is far better than the in-screen sensor that the rival Samsung Galaxy A50 has.

Moreover, its 32-megapixel selfie camera doubles as the face unlock sensor. You can enable the ‘Raise to Wake’ feature so it can instantly unlock the device when you pick it up. Since it lacks a night-seeing sensor, it won’t work in a pitch black room, unless the screen brightness is high enough to light up your face. It can unlock the phone really fast, although using the fingerprint might feel faster and more intuitive.

Google’s Autofill passwords, which comes with Android Pie, is also on the Huawei P30 Lite. Features like App lock, PrivateSpace, and File safe are also present.

The Huawei P30 Lite comes from a family with great camera prowess, which is why we’re not surprised when we were able to take great images with it. Its 24-megapixel sensor, one of the three cameras on the back, takes really good images. Thanks to the help of AI and its wide f/1.8 aperture, Huawei P30 Lite can capture pictures with punchy colors, deep contrast, and acceptable dynamic range.

The wide aperture also makes shooting in low-light scenarios a breeze, and creates a depth in the image with its blurred background, without the need of the Portrait Mode effect.

Moreover, the 8-megapixel ultra-wide sensor is great if you want to take group pictures. Or in scenarios where you have to stuff a lot of subject in a single frame. However, since it only uses an 8-megapixel sensor, the details and sharpness is a little soft.

Lastly, we have the jampacked 32-megapixel front-facing camera of the Huawei P30 Lite. On paper, you can already tell that it can take selfies with great detail, with Instagram-ready colors and contrast.

The only hurdle I’ve experienced is, there are times where the camera app struggles to set the exposure right, resulting in an overexposed photo. But if you’re patient enough, you can adjust it manually by tapping the screen to find the right subject and slide up (or down) the exposure levels.

There’s a 3,340mAh battery on the Huawei P30 Lite. It’s clearly an underwhelming capacity considering that most of the competition has at least a capacity of 4,000mAh in them. Its uninspiring battery capacity clearly shows in our tests. PCMark’s battery stress test gave it a score of 9 hours and 19 minutes of screen-on time before reaching 20%. This basically means that you’d need to reach for the charger every night, or even before the day ends if you’re a heavy user.

To put it in perspective, we give this a 7/10 score as we’ve already tested devices that got a score of at least 11 hours from PCMark.

On the upside, it does come with a fast 18W charger. This can refuel the battery from 20% back to 100% in around an hour.

The Huawei P30 and P30 Pro are easily some of the best flagship devices that you can get in the market. And with the P30 Lite, Huawei is covering all bases by also having an appealing offering for the midrange market. The Huawei P30 Lite doesn’t have a unique feature, just like most of its competitors. But the beauty of it is, the handset was able to cover all the areas with absolute grace.

It brags a sleek design that’s good both in the hands and the eyes. There’s a large display and reliable performance for both work and play. And a killer set of cameras that exceeds expectations. If we were to nitpick, we wish that Huawei would finally retire that Kirin 710 processor and come up with a more powerful chipset. Not that it’s bad performer, but we want to experience an improved experience over the Huawei P30 Lite’s older brothers — like the Nova 3i from last year.

In addition, Huawei could have used a bigger battery on this P30 Lite. We did like that the fact that it’s one of the lightest midrange devices around. But gaining an extra weight would have been acceptable, especially if we’ll be getting an extra battery life from it.

Bottom line is, the Huawei P30 Lite is easily a great option for those who want to venture into mobile photography without breaking the bank. As a bonus, you’re also getting a smartphone that’s a great and reliable daily driver.

Pricing and availability of the Huawei P30 Lite in the Philippines