These two smartphones are monstrous in size, with the 8X having a 6.5-inch screen while the 8X Max is equipped with a 7.12-inch display. Their predecessor, the Honor 7X, only has a 5.93-inch screen, so it looks like Honor is rebranding the X-series to the almost-tablet category — a really niche market without much success for the past couple of years.

While they have huge displays, the overall footprint may not be as massive as people might expect. It’s because they have 19.5:9 aspect ratios, which make them taller instead of wider. Holding it should still feel comfortable, as it’s narrow enough to be grasped with one hand.

The Honor 8X has a traditional notch similar to the iPhone X, but the Honor 8X Max features a tiny notch akin to the “waterdrop” and “halo”screen of OPPO and Vivo. Like other smartphones with a notch, the bottom bezel is a little bit thicker compared to the other sides, but it’s not really that noticeable.

Several differences between the Honor 8X Max and 8X can be found in the chipset, cameras, and batteries. The standard has more pixel-packed sensors for photography compared to the former. Meanwhile, the Honor 8X Max has an enormous 5,000mAh battery capacity.

Both phones have fingerprint scanners and face unlock for security purposes. Unfortunately, they are still stuck with microUSB, as USB Type-C was left out. 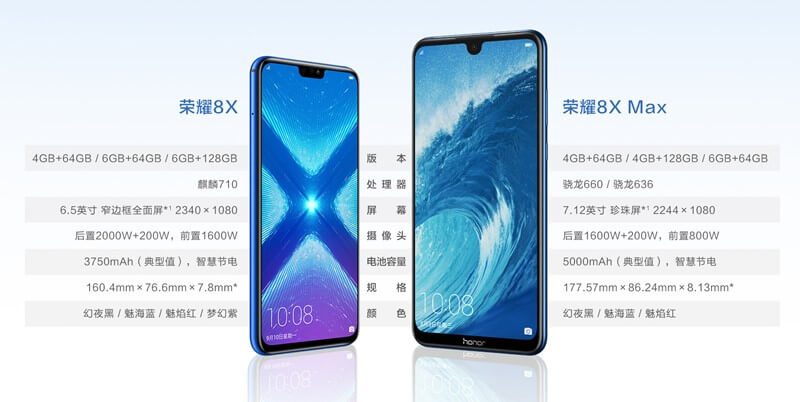