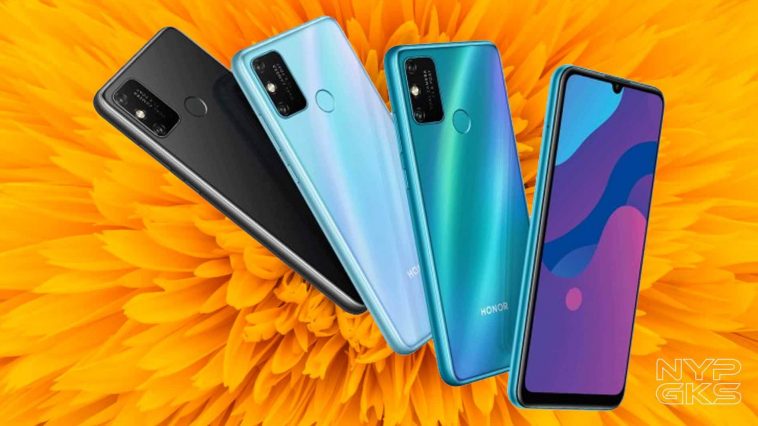 After concluding the Honor 30S, the brand then announced another handset. This time, it’s the budget-friendly smartphone, Honor Play 9A. The good thing here is that the handset comes with competitive specs for its price tag.

One of the main selling points of Honor Play 9A is its massive 5,000mAh battery capacity. But for the given price range, we can’t expect much from it since it still uses a 10W charger and an outdated microUSB port. It also features a 3.5mm headphone jack and an FM radio.

As for the display, the Honor 9A has 6.3-inch IPS LCD with 720 x 1600 pixel resolution. On the upper-middle part of the screen is a tiny teardrop notch that houses the 8-megapixel front camera.

At the back of the Honor 9A is a 13-megapixel main camera with f/1.8 aperture that can shoot 1080p videos. Beside it is the 2-megapixel secondary camera for portrait photos. Unfortunately, the device lacks an ultra-wide camera. There’s also a fingerprint scanner beside the cameras.

Under the hood, MediaTek Helio P35 processor powers the device paired with 4GB of RAM and comes in two storage variants — 64GB and 128GB options. Both storage options are expandable up to 512GB via microSD card.

Just like other recently released Honor smartphones, the device no longer has Google Mobile Services despite running the latest Android 10 with Magic UI 3.0.1.

Honor has not announced whether the Honor Play 9A will be available in the Philippines.