And before you skip this review, let me ease your mind and say that the Y9s has Google Mobile Services. So unlike other devices like the recently launched Huawei Y7p, this one comes with Google Play store — possibly the last Huawei device to have it until the US conflict gets settled.

Now that we got that out of the way, let’s dig in further and see what this device has in store for us in our Huawei Y9s review.

When you first hold the phone, you can quickly notice how tall and wide it is. But despite that, the Huawei Y9s feel really sleek and thin. 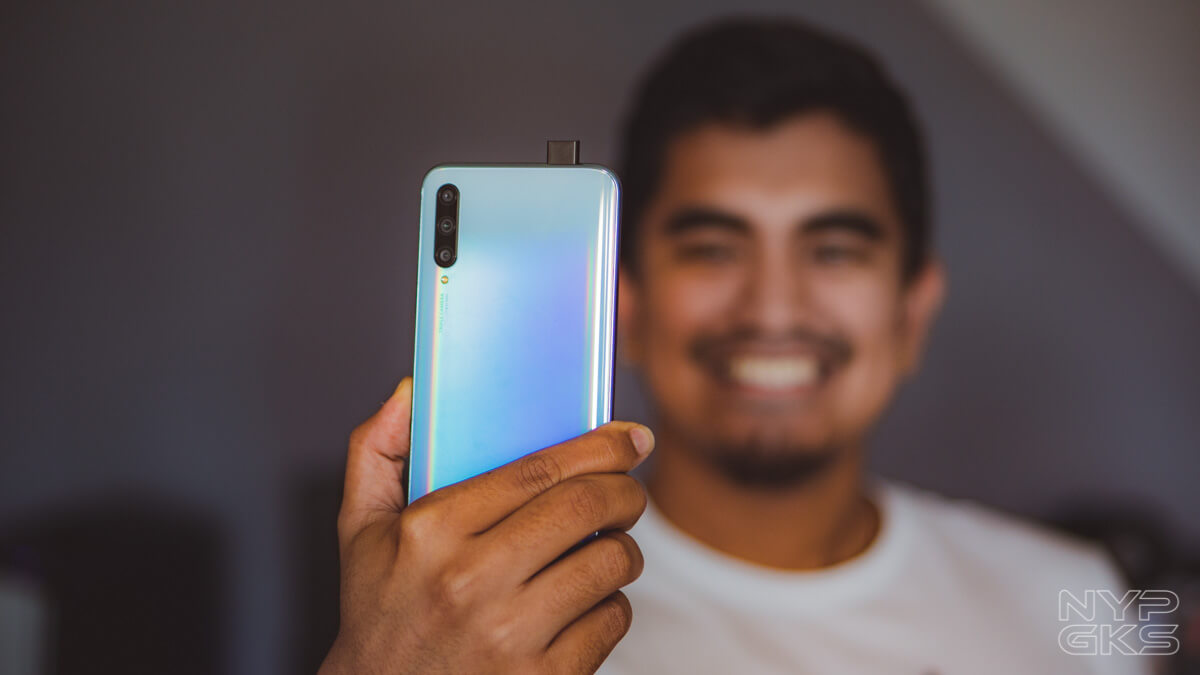 The size is due to its large 6.59-inch FHD+ IPS display. But despite its enormous size, Huawei has kept the footprint to a minimum.

That’s thanks to its ultra-thin bezels, which were also made possible by the pop-up camera that levitates in the left corner of the top of the handset. It sure looks very cool and a conversation starter with friends. It’s not clear what glass Huawei used on the screen, but they do pre-applied a screen protector for extra protection. 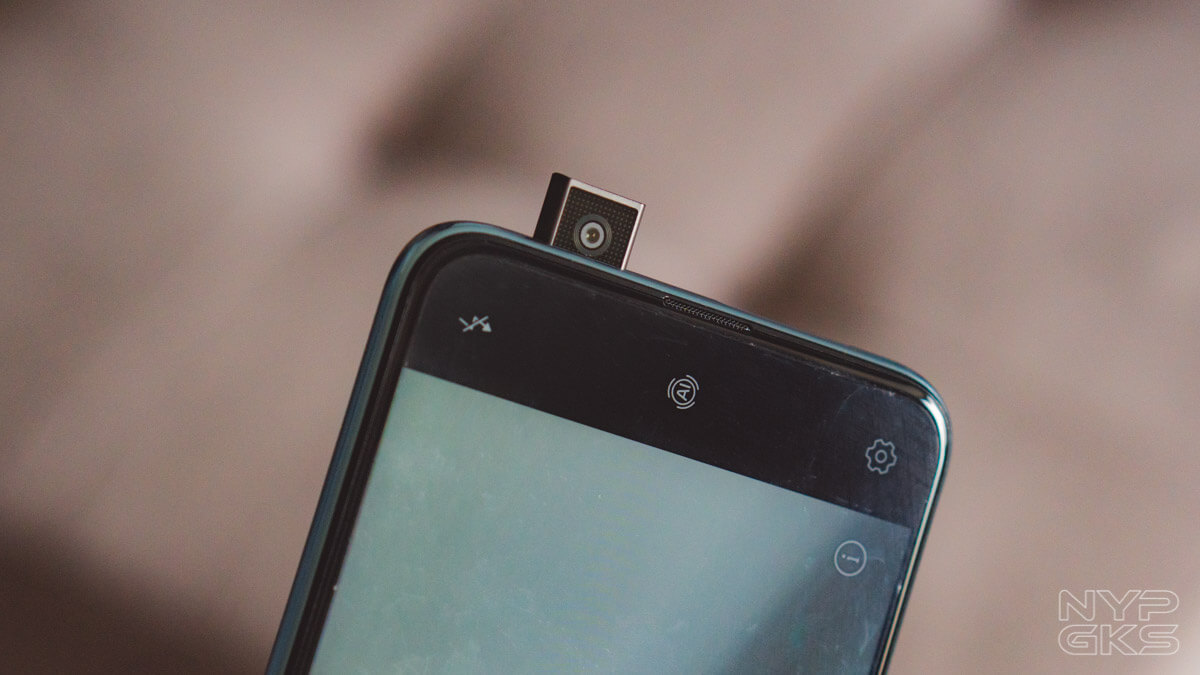 The back of the Huawei Y9s is also made with glass, which is slightly curved to further improve the ergonomics when holding this device. I also liked how clean it is, especially in this Breathing Crystal color option (Midnight Black also available). It’s a color gradient between white, blue, and purple — just like what we saw on the Huawei P30 Pro.

To further streamline the design, the triple cameras are sitting flush in an unnoticeable camera bump in the top left corner. Huawei also placed the fingerprint scanner on the side for a cleaner look. It doubles as the lock/power switch, so your phone is already unlocked and ready every time you press to wake it up. 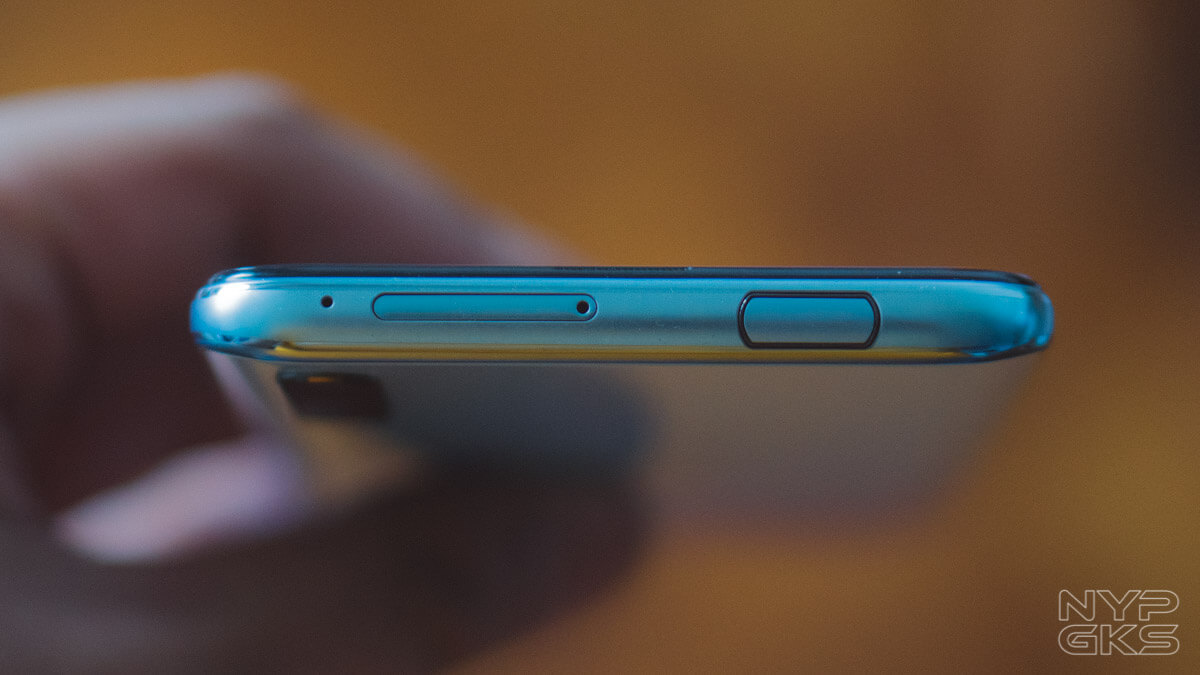 On the top, we have the said pop-up camera, next to the SIM card tray. On the downside, this is a hybrid one, so you can either have two nano-SIM cards or sacrifice the other one for a microSD card (up to 512GB). 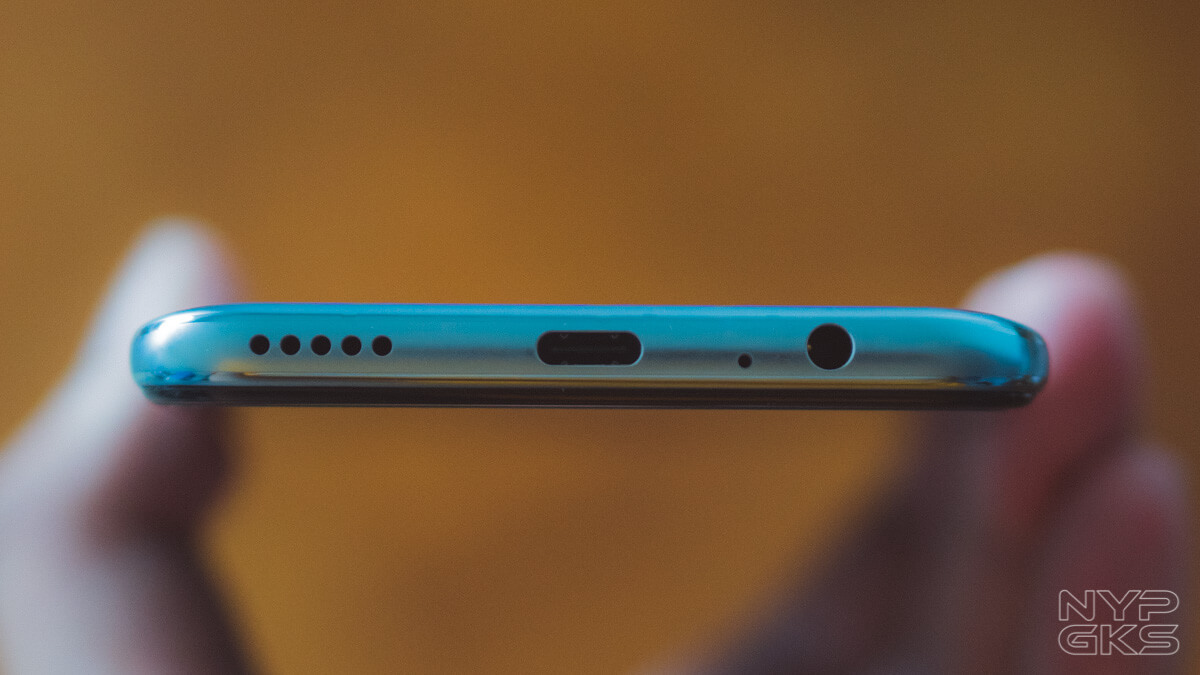 We have the 3.5mm headphone jack at the bottom, together with the built-in microphone, USB Type-C (thankfully), and the mediocre loudspeakers. The bottom-firing speaker is decent for private listening, but the overall sound quality is below average. 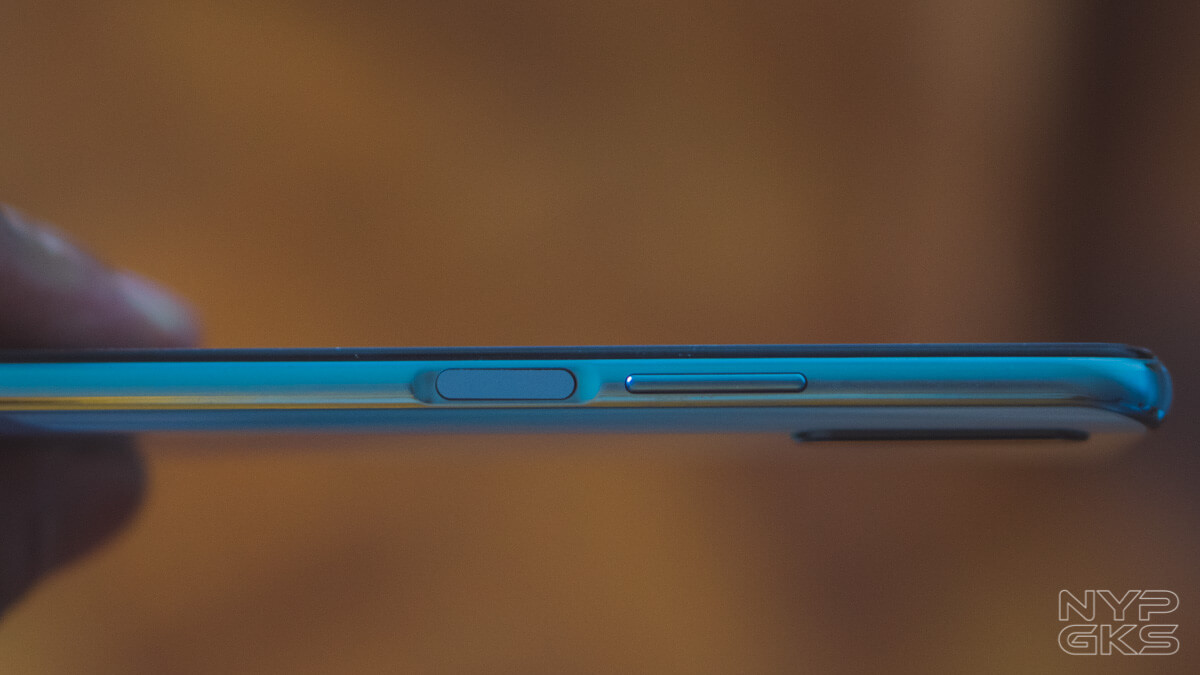 Huawei is really going with a clean design on the Huawei Y9s. The left side is clean, while on the left we have the said fingerprint scanner/lock/power switch below the volume controls. I wish the power switch was protruded a bit more to make it easier to press.

Overall, I’m really liking the sleek and clean design of the Huawei Y9s. Despite being a bit heavier and thicker than most smartphones today, as it weighs 206g and 8.8mm thick.

If you like watching videos or doing work, you’d really appreciate the display on the Huawei Y9s. It uses a very large 6.59-inch FullView IPS panel, with an appropriate resolution of 2340 x 1080 pixel resolution at ~391ppi, and a 19:9 aspect ratio. 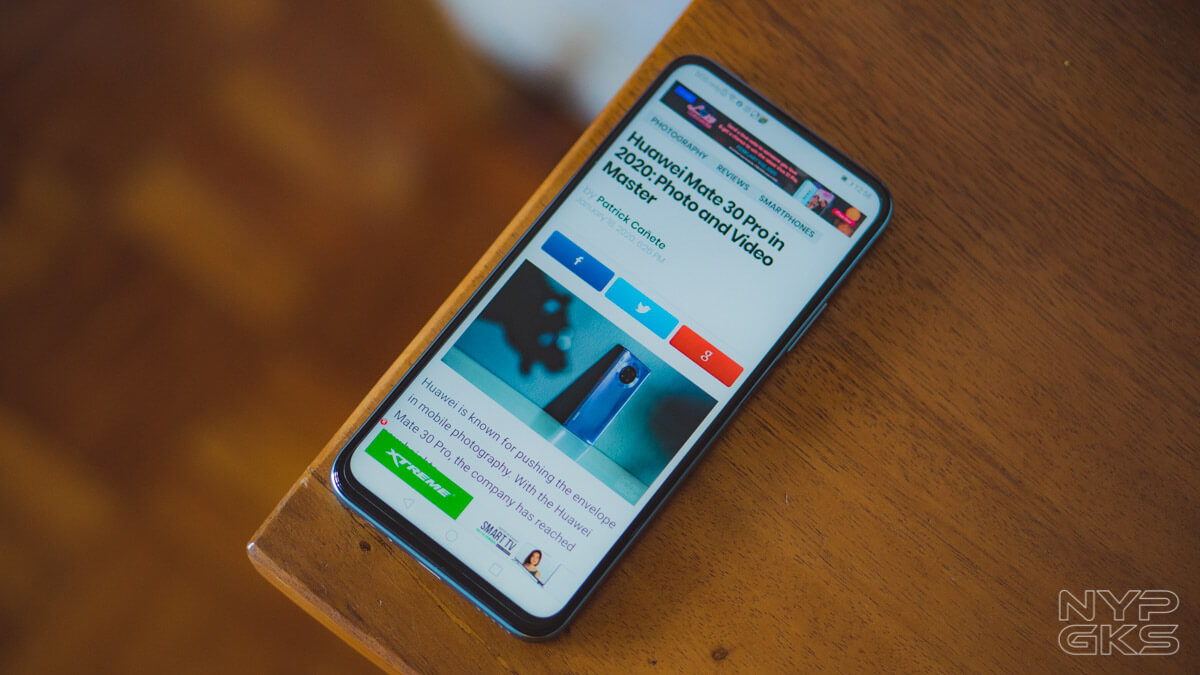 The large screen provides a lot of room for doing tasks. Also, small texts will look bigger on this one, which can be handy for those who have bad eyes for reading like me. 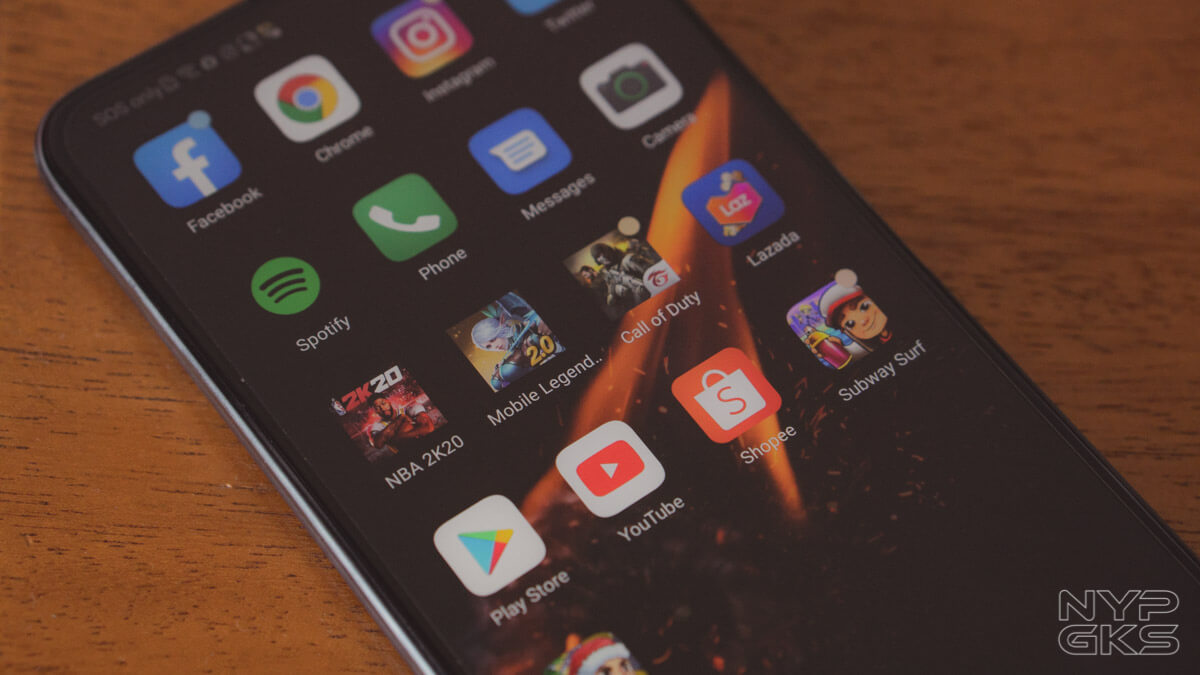 Color quality is fine for an IPS display, contrast is acceptable, and the screen brightness is sufficient enough for outdoor visibility. Sharpness and details are also on point on this one.

The Huawei Y9s uses the eternal 2.2Ghz Kirin 710F octa-core processor, which Huawei should really retire by now. It’s coupled with a Mali-G51 MP4 GPU, with a spacious 6GB of RAM, and 128GB of onboard storage that can go up to 512GB via microSD.

It may be aging, but the Kirin 710F processor still packs a punch. Partnered with its roomy 6GB of RAM, you can open apps in a jiffy and switch between them without a hitch. Unlock the handset in a snap, take pictures fast, and more. Although there are definitely some hiccups here and there, but that’s normal for a device at this price point.

The Mali-G51 MP4 GPU also handled most games well, which looks even better on a screen this large. If you’re a big Mobile Legends fan, just like most of us, you’d be glad to know it’s optimized in the Huawei Y9s as it runs on Medium settings with high frame rates. 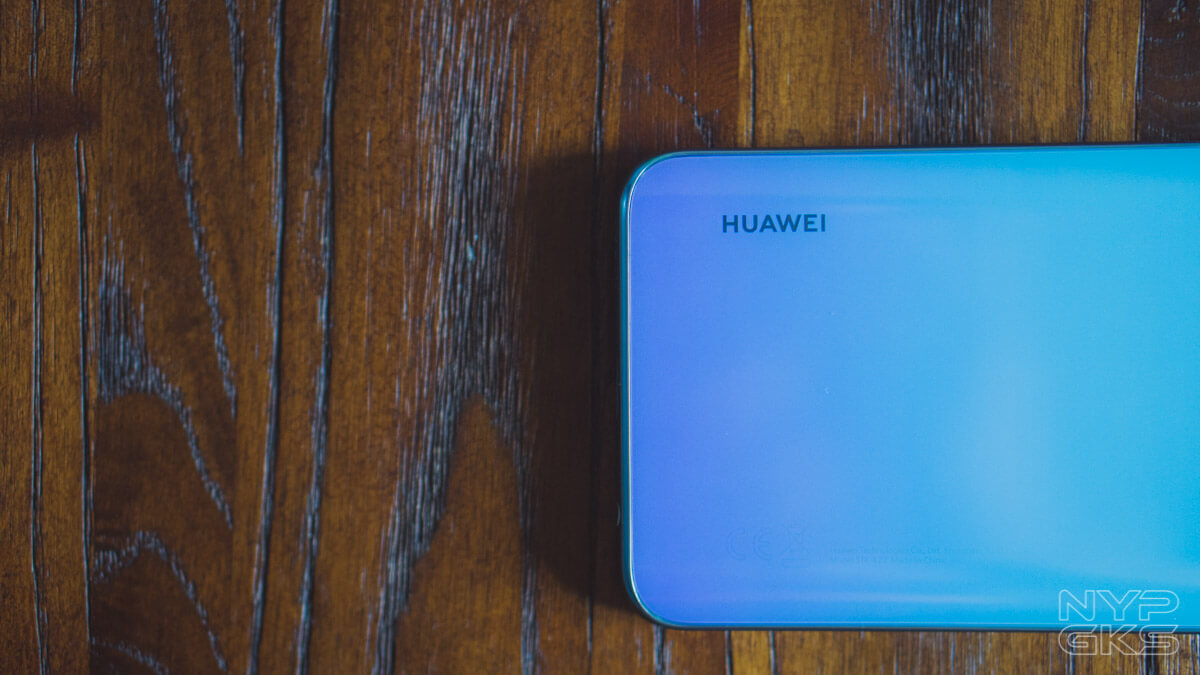 However, graphics-intensive games like Call of Duty Mobile will feel a little laggy unless you dial down the graphics quality to Low/Medium.

As stated earlier, the Huawei Y9s made the cut and managed to keep Google Mobile Services support. On the downside, this could be the last of its kind as newer Huawei smartphones that were released, including the Huawei Y7p which now dropped GMS. 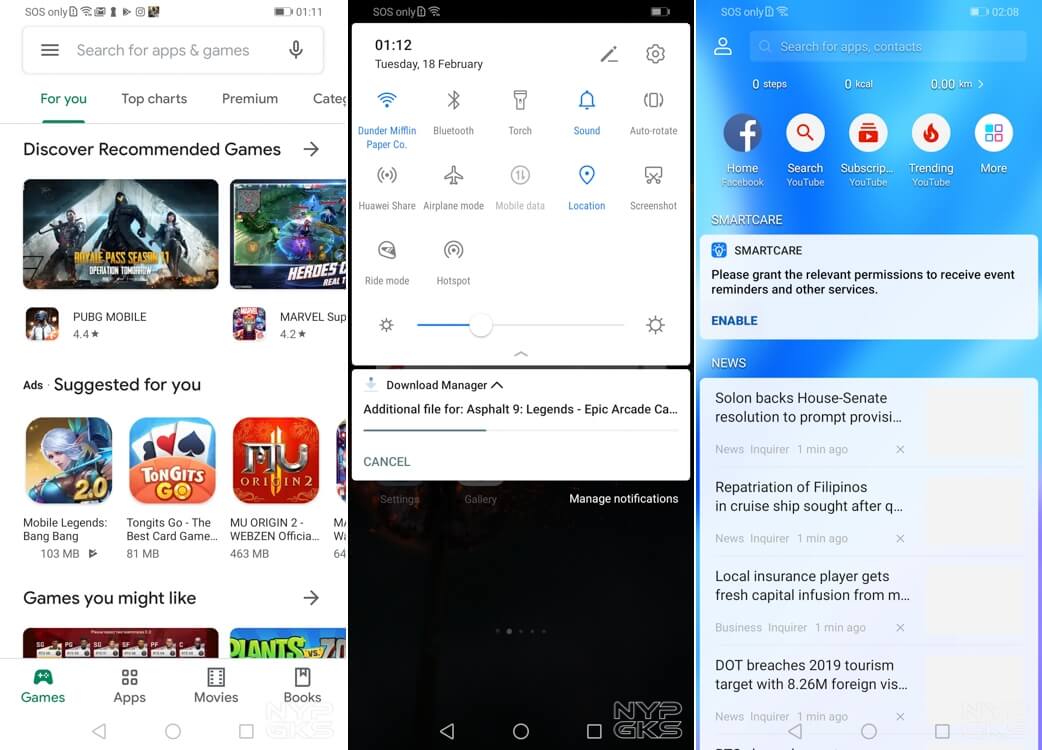 But don’t mind that, if you’re getting the Huawei Y9s. You’re safe. It comes with Google Play, Gmail, Google Maps, YouTube, and more.

The interface looks familiar to other Huawei devices that we’ve tested. After all, it runs on the same Android 9 Pie with EMUI 9.1 interface on top. The notifications tab on top looks clean, which you can expand by swiping down. There’s also a special screen on the far left of the home screen with tabs for Smartcare, news, shortcuts to most-used apps, and a search tab. 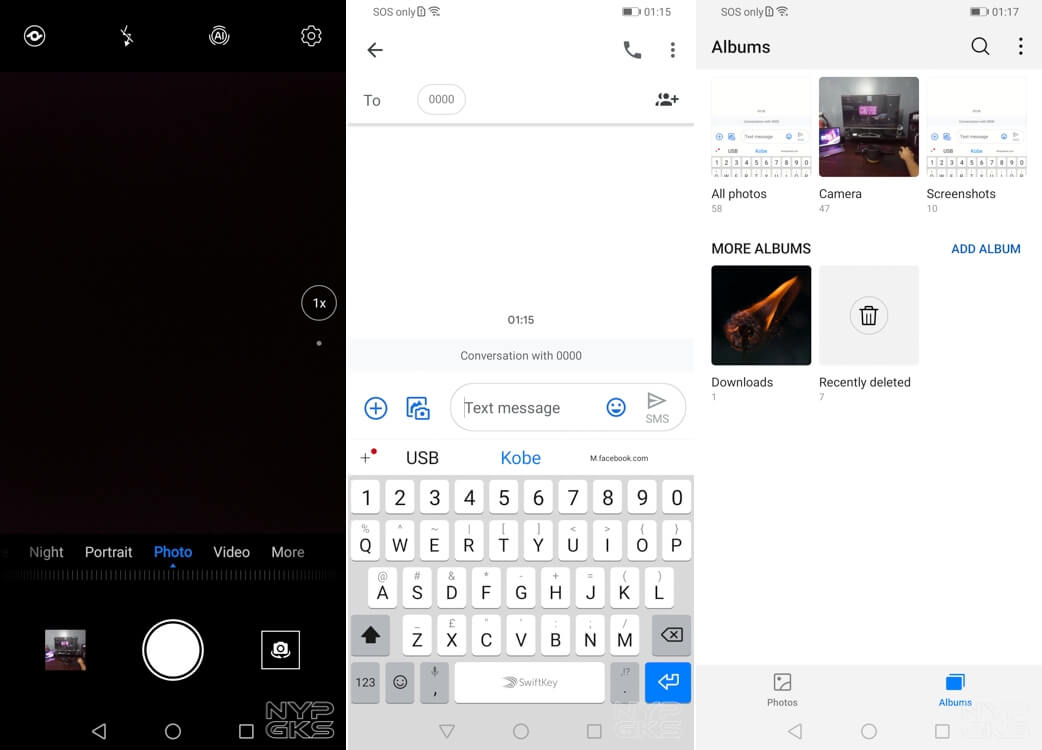 The Huawei Y9s’ camera app looks clean and intuitive, the switch on the side of the viewfinder lets you easily move from the primary camera to the ultra-wide.

It uses a SwitKey keyboard, tailored to Huawei’s specifications. However, due to the huge display of the Huawei Y9s, the keys feel a bit taller and slimmer, which may take some time to get used to. All the photos and screenshots you took are neatly organized in the Gallery App.

Overall, Huawei’s user interface really compliments the handset’s hardware and overall design. Here’s to hoping that it gets updated to Android 10 soon.

As you probably know by now, one of the highlights of the Huawei Y9s lies in its cameras. It packs a 48-megapixel primary shooter with a bright aperture of f/1.8. We also have the 8-megapixel ultra-wide camera at f/2.4, and a dedicated 2-megapixel depth sensor.

We’ve seen the same 48-megapixel camera on a lot of midrange devices today. And in the Huawei Y9s, it still produces well-detailed and sharp images, with believable colors, acceptable contrast, and passable dynamic range.

Bear in mind that it outputs 12-megapixel images, thanks to pixel-binning. You can enable the full 48-megapixel mode on the settings if you’re planning to print the images you’d be taking.

AI scene detection is also present if you want to add some splash of colors to your images. This feature does a real-time analysis of the scene before you take it, then applies the right amount of saturation that fits with the scene.

The 8-megapixel ultra-wide camera of the Huawei Y9s does its job fine. You can snap a photo of tall buildings, landscapes, and large dining tables — all in a single frame. But obviously, the details, colors, and contrast are not as good as the primary shooter.

Meanwhile, the depth sensor does a decent job of isolating the foreground to the background. It helps you create that professional-looking photo feel with shallow depth-of-field.

Lastly, we have a 16-megapixel selfie camera. The portrait and AI beauty modes can definitely make your skin look fairer, but turning it off will result in sharper, overall better-looking images.

I also noticed that it’s a wider focal length than what other selfie cameras are. This is great for taking group shots or if you don’t want to stretch your hand farther away when taking selfies.

With its outdated chipset, the Huawei Y9s has some pretty outdated connectivity features. 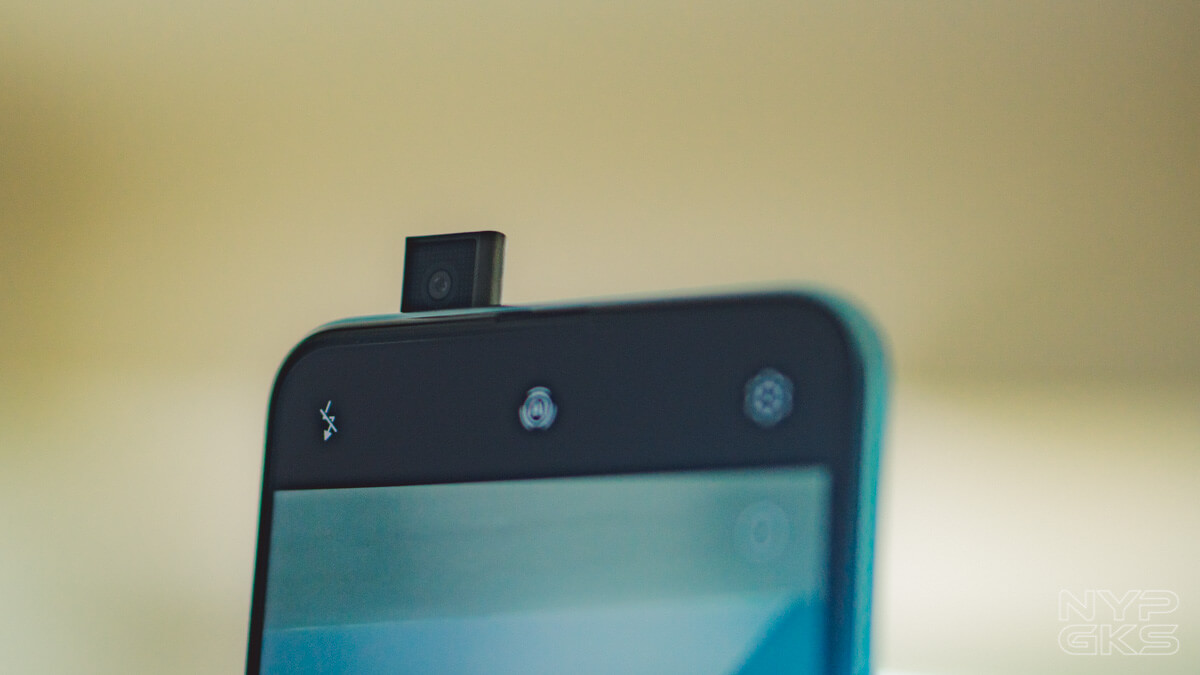 On the upside, it has USB Type-C port for charging and data. Call quality is also fine with the earpiece and dual microphone setup. Plus, 4G LTE connectivity provided reliable speeds on our mobile network during our time with it.

The Huawei Y9s comes with a 4,000mAh battery, a standard capacity in most devices today. It’s bundled with a 10W charger, another typical inclusion. PCMark’s battery stress test gave the Huawei Y9s a score of 11 hours and 48 minutes of screen-on time. That’s after a loop of synthetic workload, with the WiFi and Bluetooth turned off, and the volume and brightness set to 50%.

In translation, you can squeeze out a full day or two of light to moderate usage. But if you’re heavy on watching videos and playing games, you might have to reach for the charger before the day ends.

With its Google Mobile Services support, the Huawei Y9s might be the company’s last saving grace. Devices that came out after it, even the Mate 30 Pro, didn’t make the cut and now solely relies on Huawei’s own App Gallery.

But besides having GMS, there are few things that makes the Huawei Y9s interesting.There’s the gigantic 6.59-inch all-screen display, which was made possible by its advanced pop-up selfie camera. And despite its massive size, Huawei was able to keep the build sleek and the design clean. We also have the capable triple cameras on the back and a battery that can last for a day or two. 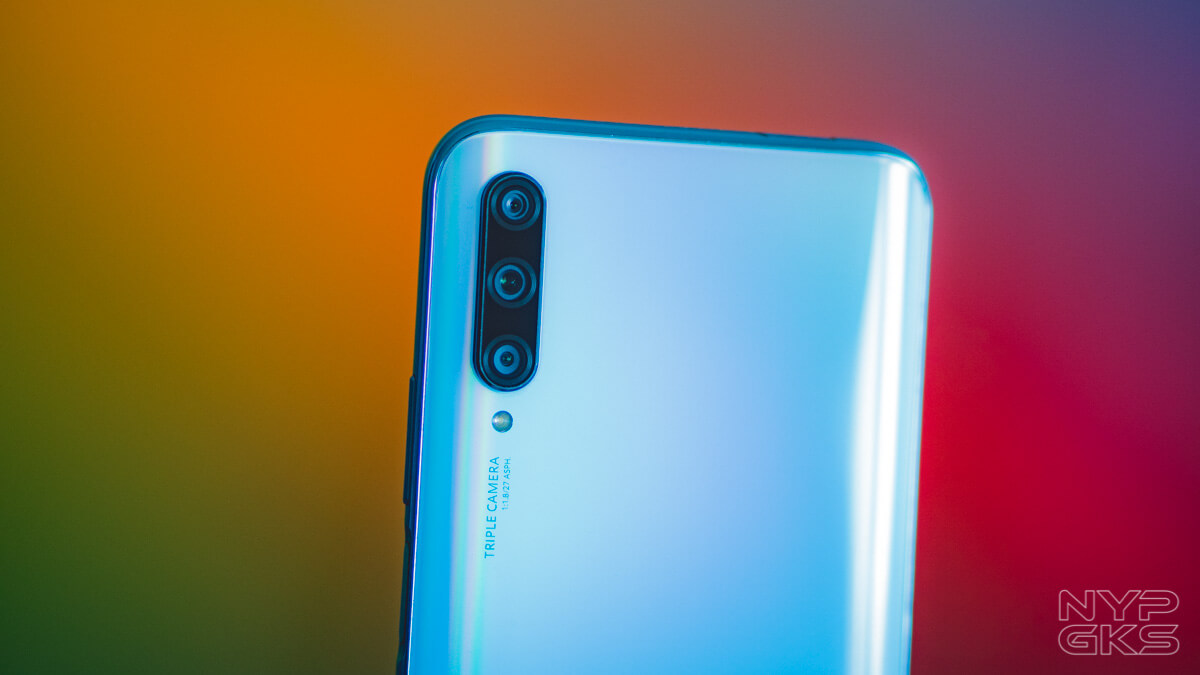 Still, there’s no denying that its Kirin 710F processor is starting to feel old. It can be a huge deal-breaker considering that a lot of similarly-priced devices have a more modern and powerful processor than what the Huawei Y9s has.

Pricing and availability of the Huawei Y9s in the Philippines

The Huawei Y9s has an official price of Php13,990 here in the Philippines. You can get it in a lot of Huawei stores, kiosks, and authorized dealers nationwide. It’s also available in Huawei’s official online stores in Shopee and Lazada.

If you’re looking for other options, you may also check out the Xiaomi Redmi Note 8 Pro and Realme 5 Pro which costs about the same.