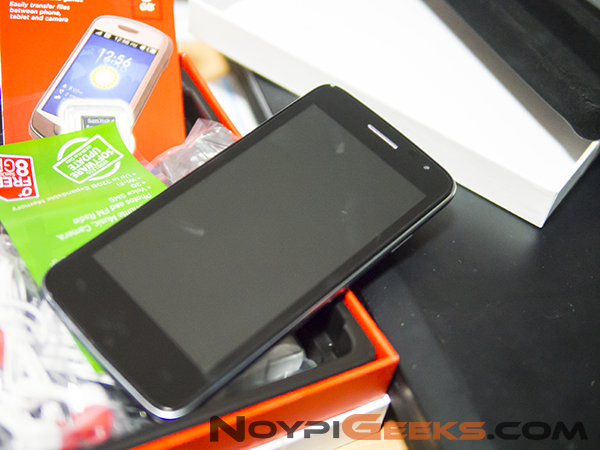 O+ have been consistently peppering us with good quality “budget” phones as of late. Not all may be home run winners, especially since they seem to be priced at the higher spectrum as far as budget phones go, they all are solidly built and work as advertised.

Recently, they’ve released a follow-up to their successful 8.9 model, the unimaginatively named O+ 8.91 (honestly, I can’t wrap my finger around their naming convention). I’ve used this as my daily driver for a week immediately after the Nokia Lumia 1020 so it had a large shoe to fill. Still, the phone did turn out a lovely surprise.

Specs are (mostly) pretty much standard as far as budget phones go, but if you factor in the asking price of PHP 6,995.00, well, it becomes a bit much. At a time when phones costing lower are sporting quad-core CPUs and at least 1GB RAM, then the prospect of having this phone starts to get gloomy. However, it does have one thing going for it that most budget phones (even those that cost more) don’t have: absolutely great battery life! But, let’s get to that in a bit.

The O+ 8.91 comes in an almost plain white box with their hallmark red-orange trimming on the side. The front only has the big O+ logo and the picture of the phone while the back contains the specifications and features. I do have to admit, though, that I like O+’s packaging. Its simplicity is a refreshing change to the plethora of flashy boxes. As for accessories, you’re given the standard packages, like the charger, a headset which you most likely won’t use often (most headsets are utter crap), and manuals. However, one of the nice things about O+ USA is that they supply you with a free microSD card, something that I’m hoping other manufacturers are taking note of. With a screen that sports 5.0″, expect the phone itself to e massive, especially given the fact that the phone sport wide bezels. Other than that, the phone looks good. The side is trimmed by a dark-colored metal (or at the very least metal-finished plastic), and the back cover is made of ruberrized plastic, something that I’m particularly fond of. It’s not overly thin nor light, but I doubt that you’d be bothered by it since it looks good overall. The left and right side sport the volume rocker and power button, respectively. At the front, you get the soft keys for menu, Home, and back buttons at the bottom of the screen, while at the top of it, you get the speaker grille and front camera. At the top, you have the 3.5mm audio jack and the microUSB slot. The back has the rear camera with dual LED flash and the loudspeaker. O+ 8.91′s 5″ is FWVGA display, meaning it comes with 480 x 854 screen resolution. It’s bright and clear and you won’t have any problem using it. Color reproduction is a let-down, with colors being inaccurate and muted, but it’s really on par with other phones with similar screens. The bigger screen does lend itself well to reading and, if you can forgive the lackluster color reproduction, in watching videos and playing games. However, I did find the touchscreen controls unresponsive at times when it’s under heavy load with background tasks. What I found out is that it doesn’t respond well on lighter touches. I don’t encounter this often, but just enough to notice it.

Despite the meager RAM (by today’s standards) and modest processor, Android 4.2.2 runs surprisingly smooth. There’s minimal lag, and I’ve encountered them mostly with higher end games, particularly Dead Trigger but it didn’t really affected the performance. Running casual games is still smooth all around. For telephony, the phone works remarkably well, and even running the other “smarter” side of things won’t get you into trouble.

Of course, having the smaller RAM certainly limits your choices of resource-intensive apps, like games. Dead Trigger 2 simply refused to load even if you’re able to install it. Speaking of installs, you only get 0.95GB of the 4GB internal memory. Which is why I’m really thankful that an 8GB microSD card is included. Fortunately, almost all O+ android phones can move apps and games to the microSD card out of the box without needing to root it. Hooray. But, if you want a daily driver with a monster of a battery life, then this phone definitely delivers in spades! Even with the factory setting charge, I had a hard time emptying it up. It took me to resorting to having Dead Trigger running continuously before I was able to bring it down to 15%. Barring games, I only looked for a charger after a couple of days of use, which consisted of internet access (always-on WiFi), heavy calls and moderate texts. This is definitely the Razor Maxx of budget phones!

That massive 3000 mAh battery married to the modest internals despite the larger-than-normal screen (at least relative to budget phones) really does wonders.

If you’ve used O+ phones before, like the O+ 8.37 (O+, honestly, change your naming conventions) that we reviewed a while back, then you’ll find that everything is more of the same. Perhaps one of the reasons why it’s not a resource hog is because they use an almost pure AOSP Android. I said almost because the only modification they incorporate is their Air Gesture. Another feature above the norm is the “shake to drop a call” feature. I’m not sure if it’s part of the Air Gestures or not. But, I found it cumbersome to use sometimes.

Thankfully, you can ignore the Air Gestures if you don’t want them, and they certainly don’t get in the way of the phone’s overall performance. As stated earlier, most apps run smoothly. Audio clarity is great on good reception, always a plus if you plan on making this your daily driver. Microphone also does well. I’ve also hadn’t encountered any difficulty sending text messages. Dual-SIM integration is pretty much stable and you won’t have difficulty using that feature. Bluetooth works as advertised, and so does the GPS, albeit it took a while before it was able to home in on me.

As an entertainment device, it’s pretty usable, and you’ll be satisfied just as long as you keep your expectations low. I was able to play high-def videos with no problem despite the lower resolution, and the larger screen really lends itself well. However, I can absolutely say that a screen this large definitely needs a higher resolution. Even 720p would have sufficed.

One thing that really irked me is the camera performance. It’s average, at most (and I’m being really generous here). It’s sub par in good lighting conditions, but bring it indoors, and you get crappy images. They come out soft with washed out colors. But that’s just what a sub Php7k can give you and it’s still pretty decent when compared to other competing handsets. I consistently can’t get sharp images with this phone, and that’s certainly a drag. You certainly won’t get much use of its camera and but you’re the type of person who takes a lot of pictures, or someone who simply can’t get enough of selfies and don’t mind the quality (quantity vs. quality mentality), this might suffice.

I ran it through the Antutu Benchmark app, and O Plus 8.91 garnered a respectable score of 10,123. Remember, we’re talking about a phone sporting a dual-core processor and 512MB of RAM. That score is as high as it gets with that specs. Overall, I got average performance out of the phone. With the specs-to-performance ratio, the asking price of PHP 6,995.00 comes out a wee bit steep. There are other budget phones sporting much better specs at similar prices. However, the massive battery life may actually justify the asking price. Taking away the power performance, this phone can go toe-to-toe with Motorola’s Razr Maxx for endurance, all the while doing it at a much affordable price and the fact that it has a removable battery, having a spare would multiply the endurance even further. This phone is for folks who put premium on battery life above everything else, or for folks who need a backup phone that can handle telephony well, leaving their main smartphone or tablet to do much of the smarter aspects. In fact, if it was priced lower, it would be a phone that I wouldn’t have any hesitation recommending. However, given the price point, it should’ve come with at least 1GB RAM and the big screen real estate screams for a higher resolution.