Thanks to the advancements happening in the mobile industry, budget-friendly smartphones, even those in the low-end segment, have become more capable and interesting.

The OPPO A5s is one of the proof of that. This device has tons of features that we never thought we would see on a device at this price.

With that, here in our OPPO A5s review, we shall see how far does economical devices like this have come, and if it can actually pass as a daily workhorse for both work and play.

OPPO sure knows how to make an aesthetically pleasing device, despite the cheap price tag. Although it’s primarily made with plastic, the shiny surface sure looks nice in the eyes. 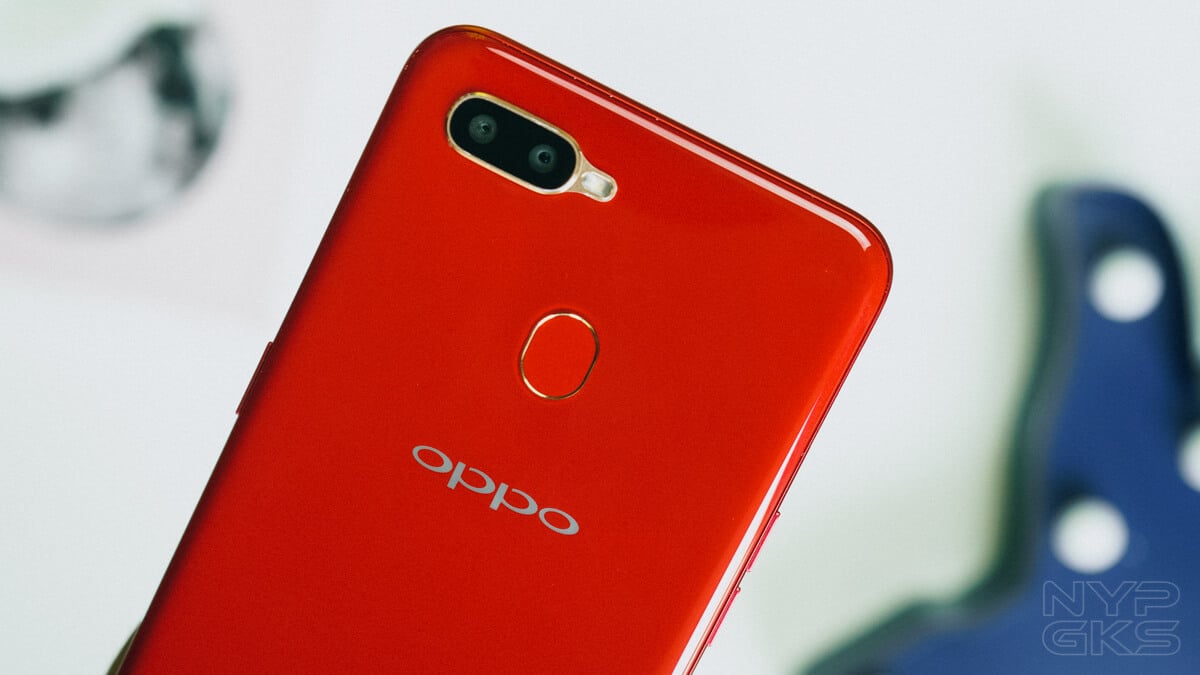 It also has gold accents in the camera and fingerprint scanner, with the vibrant Red color variant that we have here offering a really flashy look. You can also get it in Gold and Green, or in a more subtle Black color option.

The OPPO A5s is surrounded by what seems to be a metal band, with a matte paint job that provides contrast to the reflective back panel. It also made the A5s comfortable to hold, especially when partnered with its curved corners and edges. 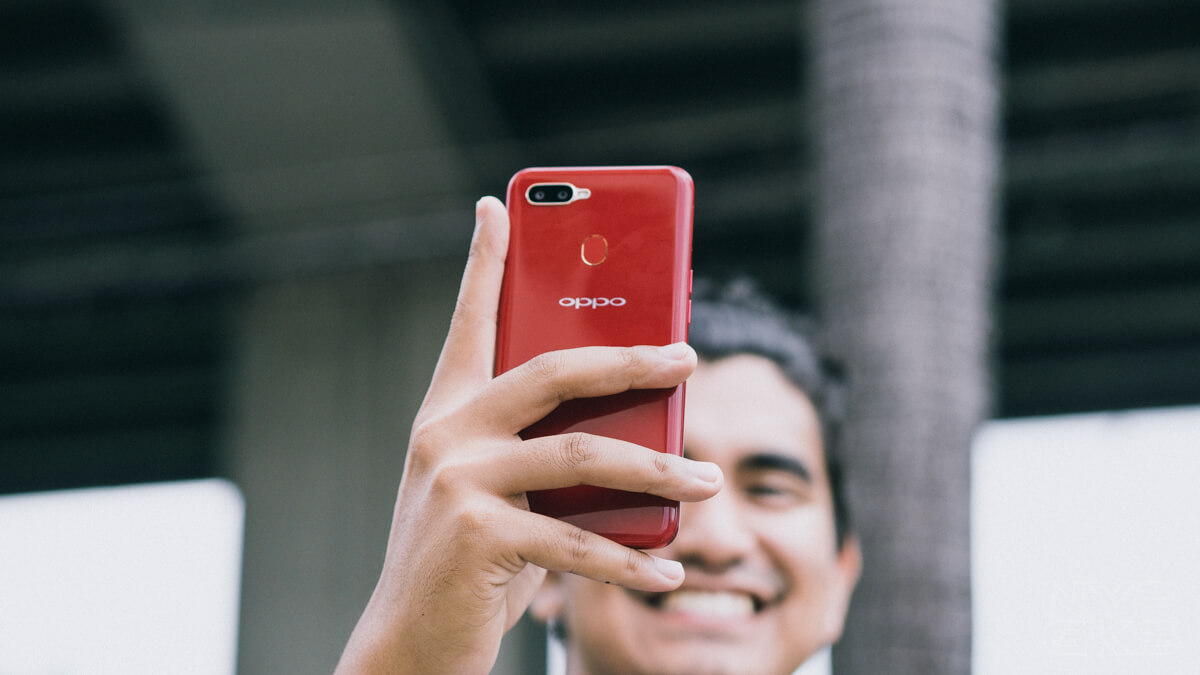 Although it’s slightly bulky at 170g with a depth of 8.2mm. The slightly thick body is acceptable, considering that it comes with a generous 4,230mAh battery.

Right on the front, you can spot the 6.2-inch HD+ display, with OPPO’s signature waterdrop notch on top. All corners, except the one on the bottom, have ultra-thin bezels for that all-screen look. 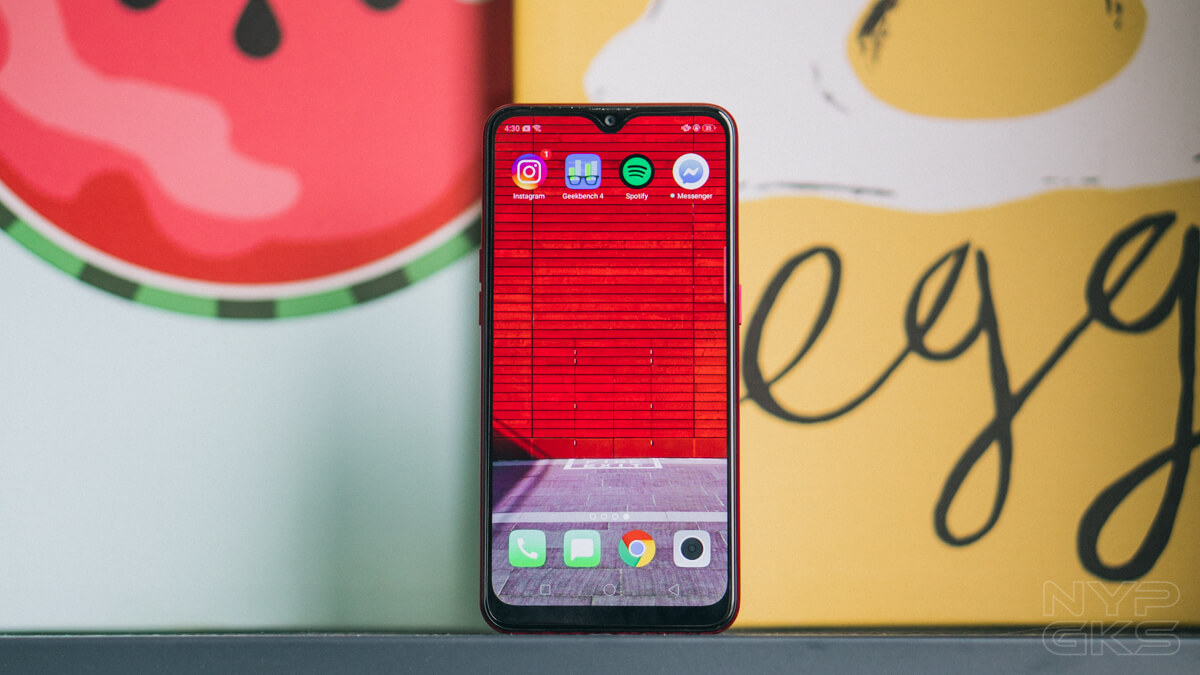 The left side has the tray for two nano SIM cards and a microSD card. While below it is the volume controls. On the left, we have the lock/power switch. I wish that the buttons were protruded more, but still, they provide a satisfying and clicky feeling when pressed.

There’s nothing to see on the top, while at the bottom we have the loudspeakers, microphones, 3.5mm headphone jack, and disappointingly, a microSD port. 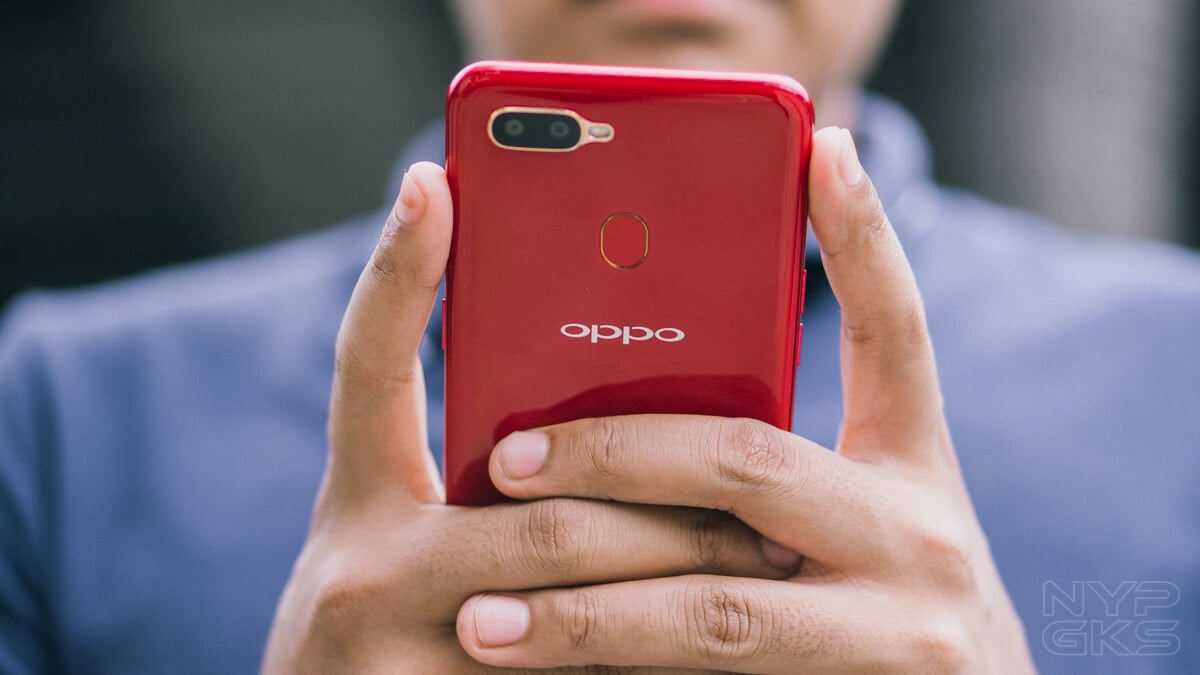 On the back, you can find the 13-megapixel + 2-megapixel dual camera setup in a horizontal position, with the fingerprint scanner and the OPPO logo on the middle.

Overall, I have no complaints with the design of the OPPO A5s. It greatly compliments the device’s entire hardware, and it surely surpassed our expectations for the price.

Smartphones that have at least 6-inch of display size have started to become a norm in the market today, and we’re glad that it did. 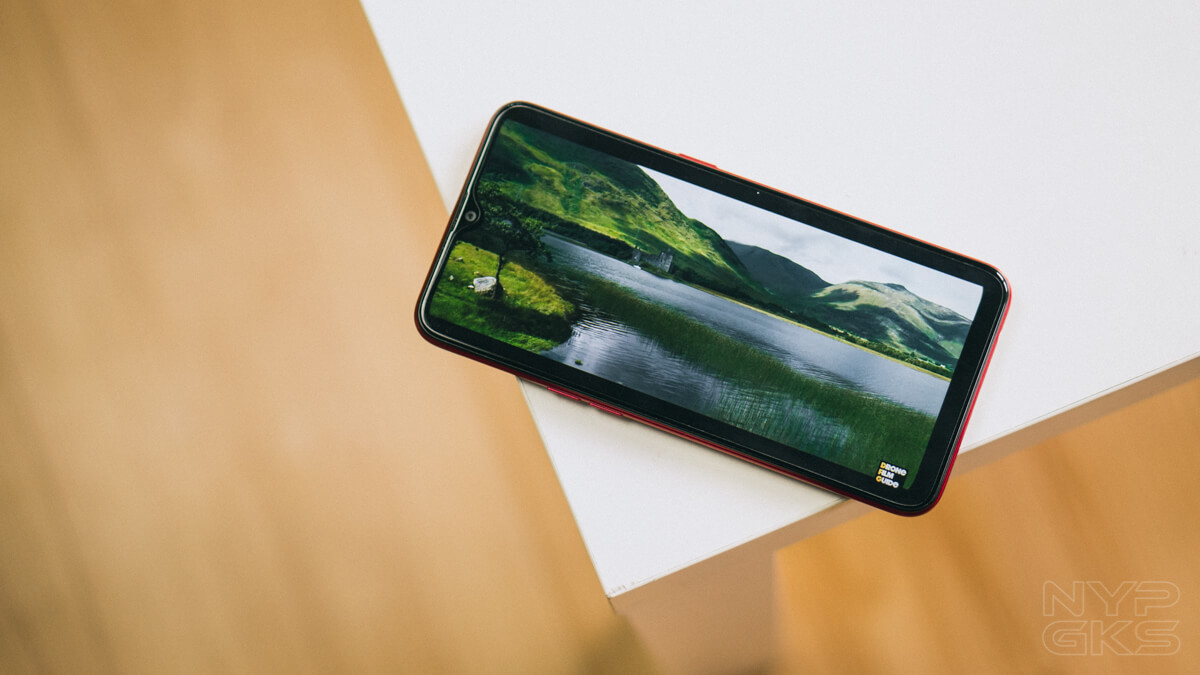 The 6.2-inch screen on the OPPO A5s provides enough room for all your productivity needs. Its HD+ 1520 x 720-pixel resolution might be lacking for its size, but it’s barely noticeable. Small texts are still readable and easy in the eyes.

Its color quality is decent for an IPS panel, both the vibrancy and contrast are acceptable. Viewing angles are also good, but not the best.

The OPPO A5s has its loudspeakers and 3.5mm headphone jack all situated on the bottom.

Disappointingly, the bottom-firing speakers provide unsatisfying audio quality. The volume is a little low, even in private listening, and the sound quality feels a little distorted.

If you want a more acceptable listening experience, you might want to plug in a pair of headphones.

The OPPO A5s is powered by a MediaTek Helio P35 octa-core processor, with 3GB of RAM, 32GB of expandable storage, and an IMG GE8320 GPU.

This is actually the first time I’ve tested this latest processor from MediaTek, and I’m a bit surprised by its performance. It feels really snappy when handling basic and day-to-day tasks — from flicking through social media feeds, watching videos on YouTube, taking pictures, and more.

However, you can immediately feel its limitations when you open up a game.PUBG Mobile immediately set the graphics settings to Low, as that’s what the game found suitable for the device’s hardware.

OPPO forgot one thing about the OPPO A5s, and that is to upgrade it to the newer operating system. This thing still runs on Android 8.1 Oreo with ColorOS 5.1, instead of the newer Android Pie and ColorOS 6 like its other siblings have. 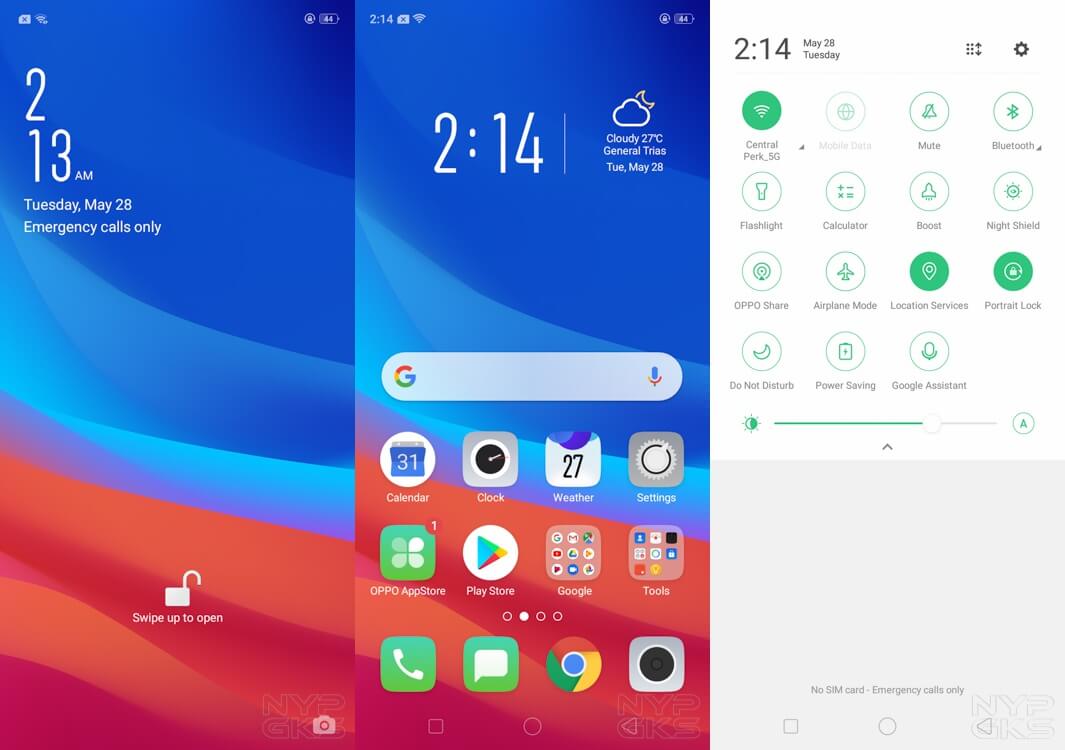 But for those of you who don’t really care that much about a device’s UI, then you can easily live with it. ColorOS is still one of the heavily skinned UIs in the market today, so you’d barely notice the difference.

However, I sure like the large control center buttons on the ColorOS 6. While with this one, we’re getting the old, small circular icons. The newer OS version also gives you an option to use an app drawer, for a cleaner home screen, which this one doesn’t have. 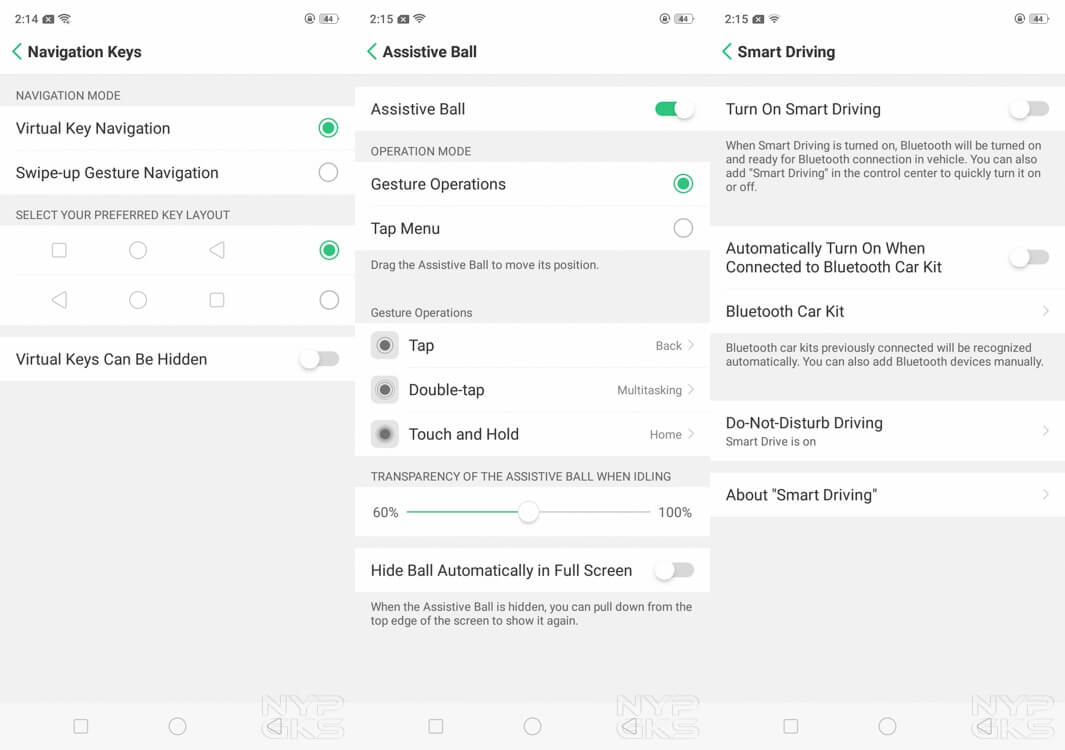 Still, it has features like Assistive Ball, Smart Driving, and a menu to switch different navigation styles. A Split Screen function is also available for multitasking, and Clone Apps for easier multi-account management.

The camera app is also familiar and easy to use. While the pre-enabled keyboard is from Google, which is easy to type on and gives quick access to gifs, search, and more. 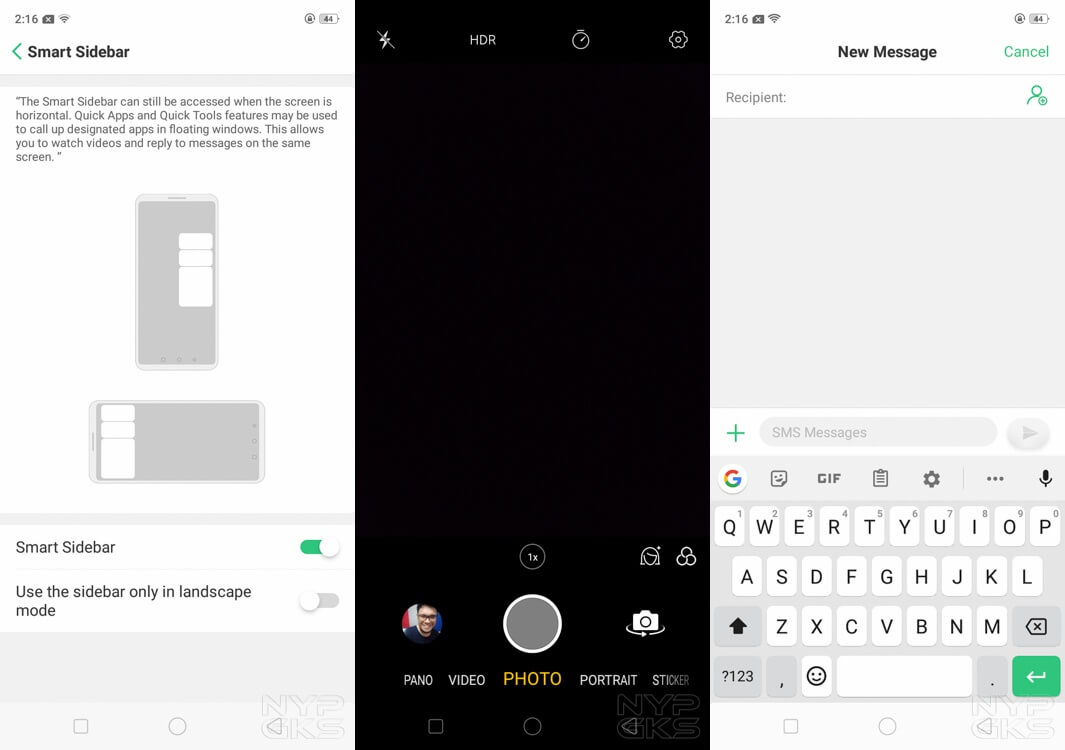 It’s user interface clearly compliments the hardware that it has, although we’re still hoping that the OPPO A5s gets updated to a newer version of Android very soon.

There’s a fingerprint scanner situated at the back of the OPPO A5s, just right above the OPPO logo. Considering the device’s relatively compact design, the scanner can be easily reached by your index finger. 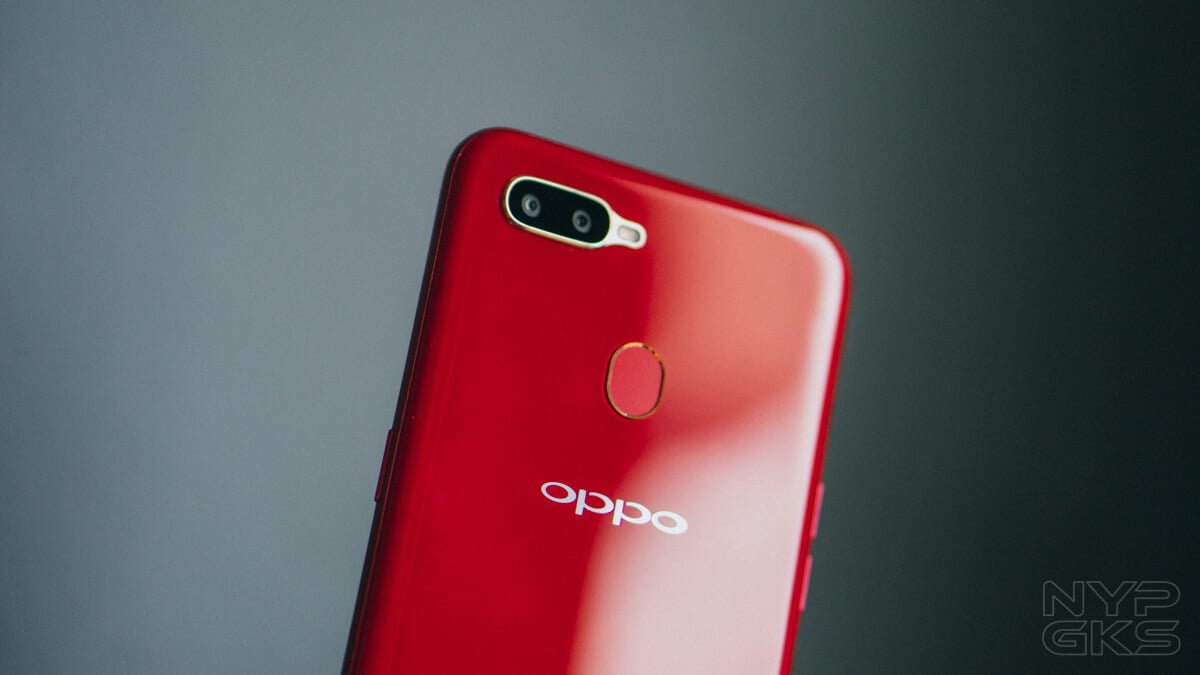 It also worked really fast with almost 80% of accuracy. You can save five different prints at once, which is good if you’re sharing the device with someone else.

The face unlock also worked surprisingly well. It uses the 8-megapixel selfie camera to detect your face and unlock the device in a jiffy. You can also enable the Raise to Wake function so it’s ready for you the moment you pick it up. But since it doesn’t have an infrared or any other complex sensor, it struggles to work in pitch black rooms. But if your screen is bright enough, it can act as a flash so the front camera can see your face in the dark.

Low-end smartphones tend to have compromises in different departments. And with the OPPO A5s, it’s clear where the company went to cut corners. This device comes with a 13-megapixel primary camera, which only has an f/2.2 aperture. It’s not clear what’s the actual sensor that OPPO used on this one, but it’s definitely not the best.

The images you can take with this one has washed-out colors and disappointing contrast. The details and sharpness are also questionable, even with images taken outdoors or in good lighting scenarios.

It’s 2-megapixel depth-sensor did a decent job of imitating that shallow depth-of-field effect, but the edge detection tends to fail when the background gets complicated.

We also have the same sentiments with its 8-megapixel front-facing camera. We’re seeing the same grainy images with lots of noise, even at well-lit shooting locations. The colors are uninspiring too.

On the upside, the AI face beauty mode works well. It can soften your skin without making it look too artificial. However, it can make the image look even softer.

OPPO clearly wants to prioritize the overall performance on the OPPO A5s. Besides its decent processor, the device also comes with a generous 4,230mAh battery. Thanks to its low-resolution screen and power efficient chipset, the A5s was able to provide really good battery performance. PCMark’s battery test gave it a score of 13hrs and 20mins of screen-on time before reaching 20%.

In real-world usage, you can get a one solid day with this thing, with still a few juice left to spare for the better half of the next day.

The OPPO A5s packs a pretty interesting value for the price. It brags a large display for productivity and a clean design that provides a premium look and feel. 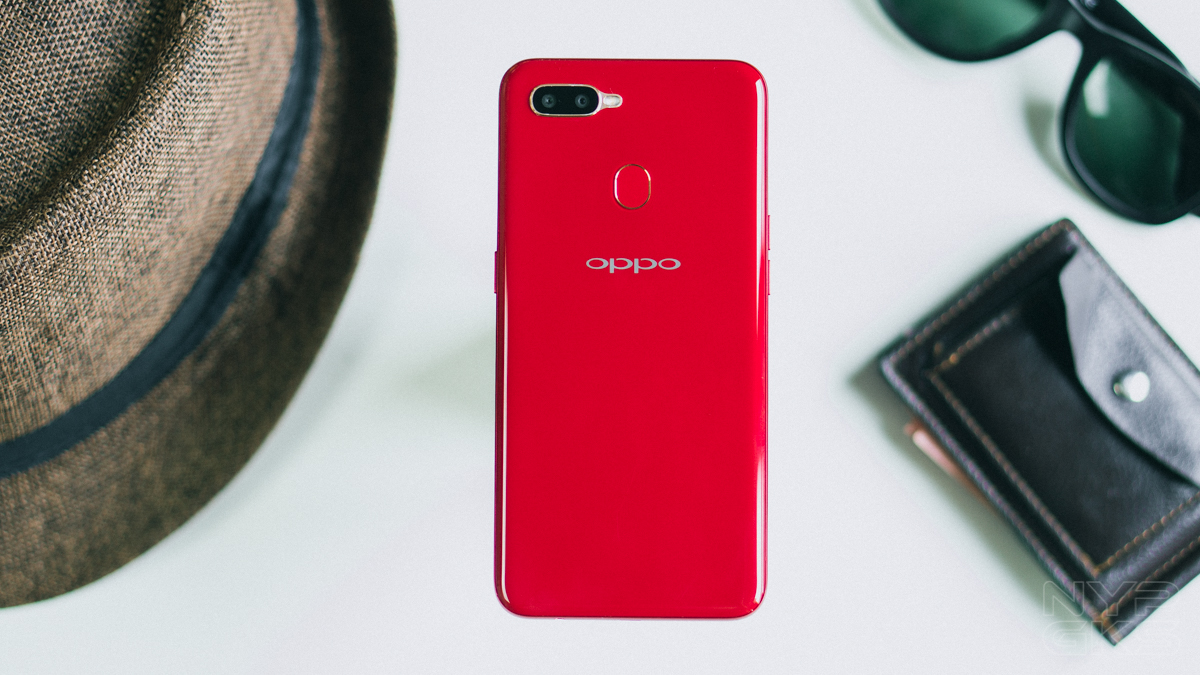 It also comes with a really generous battery capacity, which can provide a day or two of charge. Its processor was also proven to be reliable in handling day-to-day and basic tasks.

However, when it comes to gaming, you can really feel the chipset’s limitations. Also, both the cameras in front and back could have performed better. 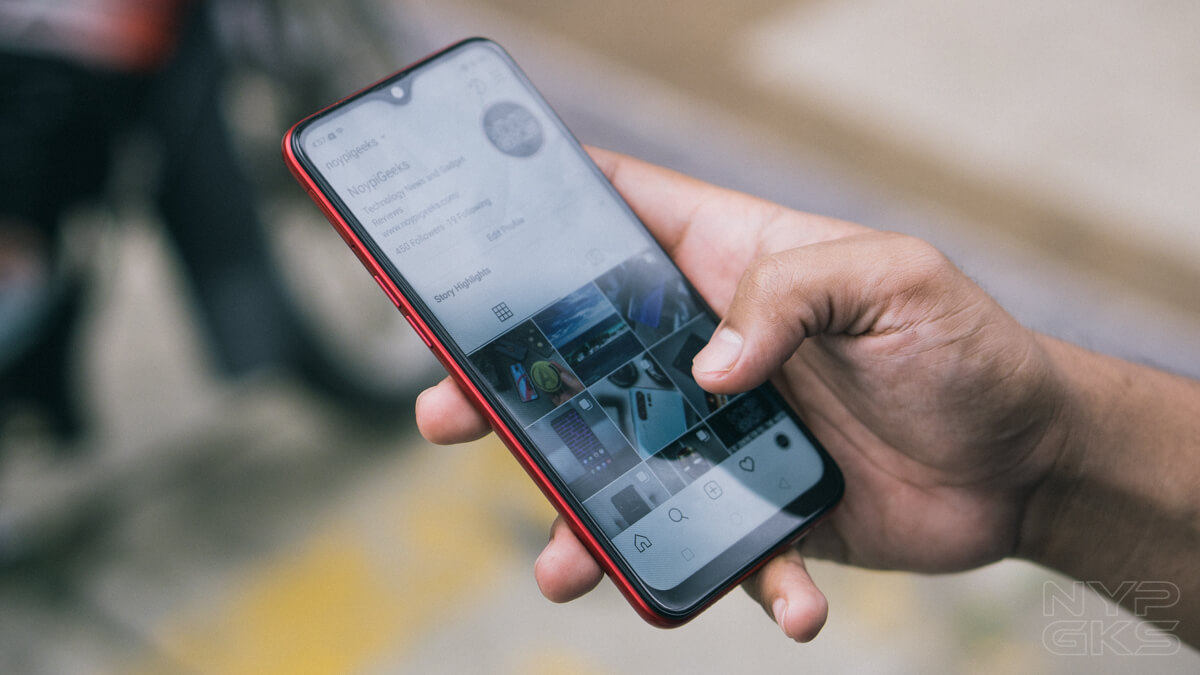 Overall, the OPPO A5s is an interesting device. But the thing is, its poor processing and camera performance is really way behind some of the other competing devices for the price.

OPPO A5s pricing and availability in the Philippines

You can get the OPPO A5s for Php6,990. It’s available at tons of OPPO stores, kiosks, and multi-brand shops across the country.