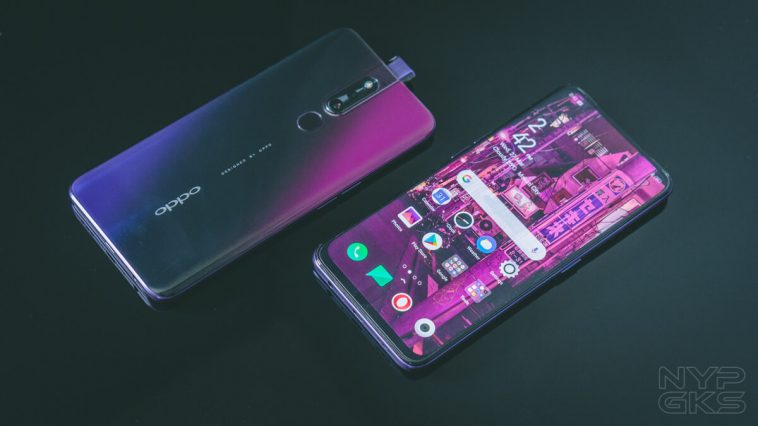 Midrange smartphones have greatly evolved right before our eyes. Now, we’re seeing devices like this with even better designs, flashy displays, and more important of all, killer set of cameras.

All of these developments are can be seen with the latest OPPO F11 Pro. This device is a major step up from its predecessor, and all the other OPPO midrange devices that came out before it.

Here in our OPPO F11 Pro review, we’re about to check out all of the cool new features that this device have, and if they are worth it of your time an hard-earned money.

Judging a smartphone’s design is really subjective. Depending on one’s preferences, they might find a handset gorgeous-looking or boring overall. But I think everyone is with me when I say that the OPPO F11 Pro is one of the most attractive smartphones that ever came out of the company. The F11 Pro is easily the sleekest and premium-looking midrange smartphone from OPPO. It features a unique color gradient design. You can get it in a brighter Aurora Green, and a more subtle Thunder Black, which is dominated by a dark color on the middle, with purple and blue accents on the sides.

The look is subtle, but it really provides a premium appearance, especially in this shiny, plastic-like surface. The special color also transcends to the purple metal chassis that keeps everything together. The edges on the back panel is slightly curved that provides great ergonomics. This makes its slightly thick 8.8mm dimensions and 190g almost unnoticeable.

Another highlight of its design is the screen itself. The OPPO F11 Pro boasts a large 6.5-inch display, with ultra-thin bezels that results to an impressive 90.9% screen-to-body ratio. However, the bezel on the bottom is slightly thicker when compared with devices like the Vivo V15 Pro, but this is acceptable considering that it uses an IPS panel instead of OLED. I also like how the dual cameras on the back were placed. Both sensors and the LED flash are placed in a tall ring, with an extended piece of metal that’s adjacent to the pop-up selfie camera on the top.

Speaking of which, the 16-megapixel selfie camera feels really well made and designed really well. A piece of glass wraps around the lens up to the side, with a piece of metal acting as its backbone. The pop-up selfie camera is joined by a noise-canceling microphone and ambient light sensors on the top. While on the bottom we have the 3.5mm headphone jack, the primary microphone, microUSB, and the loudspeaker.

OPPO’s decision to keep using microUSB instead of the newer Type-C could really disappoint a lot of people. A bottom-firing speaker also has a lot of downsides, however, unlike most devices that we’ve tested, it doesn’t get easily muffled or blocked when using the phone in landscape.

On the left side we have the volume controls, while on the right we have the lock/power switch, with a tiny green line accent engraved on it. A hybrid SIM card tray is also found on the right corner.

Unlike most devices that we’ve had before, the buttons on the OPPO F11 Pro is really comfortable to press and offers a satisfying click every time you use them. They are also placed low enough to make it easily reachable, even for people with smaller hands.

Clearly, both the design and build quality of the OPPO F11 Pro is among its greatest strengths. Now let’s dig in further and see what other things this device offers.

Upon first holding the OPPO F11 Pro, you can immediately appreciate its all-screen, almost bezel-less display. This device brags a large 6.53-inch FHD+ IPS panel, with a resolution of 2340 x 1080 pixels and a ~394ppi. The glass protection used was not mentioned, although there’s a pre-applied screen protector (which is so thin you’d barely notice it) so don’t worry much about scratching it. The display quality is standard for an IPS panel: the whites are fairly accurate, although it’s slightly on the cooler/blue-ish tone. The blacks are deep enough, but not as contrasty as what OLED panels are, and the saturation provides realistic and not overboard.

display sharpness shouldn’t also be an issue as the FHD+ resolution was able to populate the large screen real-estate well. The display panel was also able to beam enough backlighting to make it usable even at sunny outdoors.

MediaTek’s latest Helio P70 processor is one of the best chipsets you can find on midrange smartphones. Partner it up with 6GB of memory, the device provides reliable performance in terms of handling basic and daily tasks.

If you’re heavy on social media browsing, taking pictures, and watching videos on different streaming apps, you’d really appreciate the smoothness in operation on this device. You can even switch between them without a hitch.

The chipset also provided decent performance in gaming. It’s partnered with OPPO’s Game Space feature, which clears the RAM and optimizes the overall system to improve the gaming experience. PUBG was smoothly playable at medium settings, same as with Mobile Legends and NBA 2K19. However, for its price, having 64GB of storage is a little disappointing. A 128GB of storage could have been better as other devices — some of which are even cheaper — already have this much memory. Although it’s highly plausible that a special 128GB model will come out soon.

Unlike the Vivo V15 Pro, the OPPO F15 Pro uses a rear-mounted fingerprint scanner instead of an in-display one. This is one of the disadvantages of using an IPS panel instead of an OLED one. On the upside, having the scanner on the back actually feels easier to use. Since your index finger is always resting on the back, you can easily reach it and unlock the device faster, instead of using your thumb to unlock an in-display one.

In case you want to show off and use the face unlock instead, you have to swipe up from the lock screen, the levitating front camera pops-up, and scan for your face. The front sensor, intelligent software, and capable performance work together to unlock the device blazingly fast. It also works in low-light or pitch black scenarios, for as long as the screen brightness is bright enough to light up your face.

Being one of their most current releases, the OPPO F11 Pro runs on the company’s ColorOS 6 interface with Android 9 Pie laying beneath it. If you’ve seen our Realme 3, then you’d be very much familiar with the F11 Pro’s interface. The lock screen looks clean, the control center on the top has large buttons, and the home screen has all the apps laid out.

You can also opt to use the app drawer, which you can enable in the settings menu. You can easily access it by swiping up from the home screen, with the first row housing the apps that the device predicts you’re about to use. There’s also the Driving and Riding mode, which blocks unnecessary distractions when you’re in a car or a motorbike. You can also press and hold the home button to access the Google Assistant. For some reason, it lacks the Digital Wellbeing feature that Android Pie supposed to have. It gives you data about your weekly smartphone habits and most apps used. However, it does have other native Android features like Notification Dots, which adds a tiny counter on top of each icon if there’s an incoming notification.

The OPPO F11 Pro uses Google’s keyboard, with a modified look to compliment OPPO’s aesthetic. It’s easy to type on, with word predictions on top of the screen.

The camera app is iOS-like, with just the right amount buttons to use the camera hardware. You can also use different navigation buttons and gestures, depending on what you’d find more intuitive to use.

The OPPO F11 Pro may not have the most interesting camera system of all, but it’s impressive nonetheless. It only has a 48-megapixel primary camera with a 5-megapixel depth-sensor — no ultra-wide or telephoto cameras. On the ‘upside’, it has a 16-megapixel pop-up selfie camera. It’s 48-megapixel primary shooter takes impressive photos, and provides a slew of flexibility thanks to its creative software. The colors look fine, details are on point, and the contrast is good. You can also keep the ‘Dazzle Color’ mode open, which amps up the saturation a little to make it extra colorful.

OPPO is also highlighting its night portrait mode, which takes take a decent portrait image of people in poor lighting conditions. The feature worked fine — as evident to the samples below — although the overall product will still depend on the quality of your lighting condition.

The bokeh mode feature is a little disappointing. You have to really step back for the device to distinguish the foreground from the background. But if you get the framing right, and you have the appropriate subject, it does provide a believable bokeh effect.

OPPO is known for their good selfie cameras, and obviously, the OPPO F11 Pro is not an exemption. The 16-megapixel sensor, partnered with OPPO’s software, you can easily take good self-portraits on this thing.

Images look sharp and well-lit even in low-light scenarios. The company’s Beautification 2.1 feature has been upgraded. It can improve your facial features without looking too artificial. The portrait mode also works well on this camera, despite the lack of a dedicated depth sensor.

We’ve got really reliable battery performance in the OPPO devices that we’ve reviewed before, and the new OPPO F11 Pro is not an exemption. This thing boasts a 4,000mAh battery with OPPO’s latest VOOC 3.0 fast charging technology.

In PCMark’s battery test, the device got a screen-on time of 10-hrs and 19-mins before reaching 20%. And in real-life tests, the device was able to easily last for an entire day of casual Facebook and Instagram browsing, taking pictures, and streaming videos. The OPPO VOOC 3.0 fast-charging technology also worked really fast on this device. It may not be as fast as the OPPO R17 Pro’s Super VOOC feature, but it’s still one of the fastest that we’ve tested.

The OPPO F11 Pro is a major step up over its predecessors. It sure doesn’t have the most powerful processor of all — which is the main thing that a lot of people are looking for on a device —but it has a lot of features that make it a proper 2019 smartphone. For starters, there’s the large, all-screen display. It also brags a subtle but chic-looking design, making it a midrange device with a premium look and feel.

Then again, if a smartphone that provides the best possible performance for the price is what you’re up for, then there are definitely a lot of better alternatives out there. But if you want something that looks flashy and has a few tricks up its sleeves, then you might want to add the OPPO F11 Pro to your consideration.

OPPO F11 Pro pricing and availability in the Philippines

The OPPO F11 Pro has an official price of Php18,990 in the Philippines. Pre-order starts on March 28, 2019, and will then be available on April 5. Those who will pre-order the device will get a Rockspace wireless speaker valued at Php2,499.