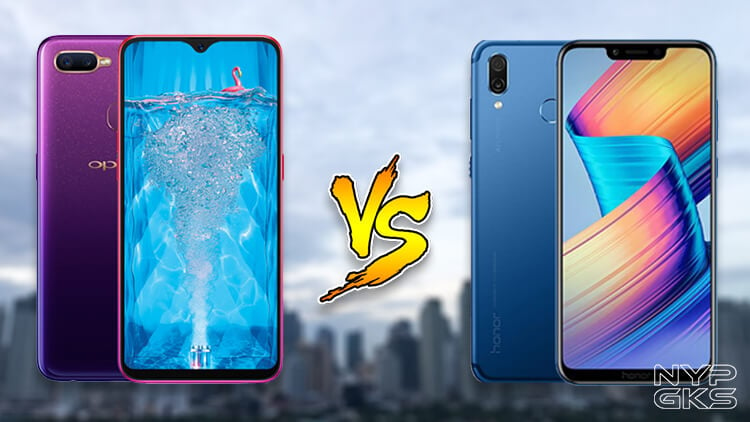 OPPO just released the new OPPO F9, an immediate follow-up to the OPPO F7 from a couple of months back. This new device brings several upgrades from its predecessor, in an attempt to stay more competitive in the already saturated midrange market.

The OPPO F7 was already a great device by itself. But with the new OPPO F9, the company wants to take it a step further by adding VOOC fast-charging technology, plus a couple of other new features that will help it stand out from the crowd.

Today we’ll be comparing it to one of the hottest devices in the industry today — the Honor Play. Thanks to its really powerful processor, Honor’s latest device is trying to reshape the midrange segment as we know it. In our OPPO F9 versus Honor Play specifications and features comparison, we’ll see how these two phones stack up against each other. Will the Honor Play continue to dominate the midrange competition? Or can the OPPO F9 manuever its way to success? Let’s all figure that out. The OPPO F9 has several features that are better than the Honor Play. For starters, the F9 has a 25-megapixel front camera. And when partnered with its software that’s been polished for taking selfies, it can easily demolish the 16-megapixel shooter of the Honor Play .

In addition, we have OPPO’s VOOC fast-charging technology. According to the company, this allows the OPPO F9 to gain 2-hours of talk-time with just a 5-minute charge. This feature could be really useful for those who are always on-the-go, who need their smartphone ready and fully charged when they are out and about. But if you don’t care about all of that, the Honor Play is the best option for you. If you want an uncompromised, and basically the best performance that you can go for the price, then you can never go wrong with this one.

There’s a Kirin 970 processor powering the Honor Play, the same processor found on high-end Honor and Huawei smartphones. And as if its graphics chip is not powerful enough, the smartphone also comes with GPU Turbo to enhance its already great gaming performance. If you’re worried about the battery, the Honor Play does have its own fast-charging technology. Although it might not be as good as OPPO’s VOOC, it does come with a relatively bigger 3,750mAh battery.

The Honor Play has the same 16-megapixel + 2-megapixel dual camera setup with the OPPO F9. However, it’s very likely that OPPO will come out on top in this category when compared in real-world usage. The conclusion here is pretty simple. If you want a chic-looking device with great camera prowess and ultra-fast charging capability, go with the OPPO F9. It has a retail price of Php17,990.

But if performance and overall value for money is your top priority, then going with the Honor Play is the best way to go. For its price of Php15,990, this is definitely the most powerful smartphone in this price category.