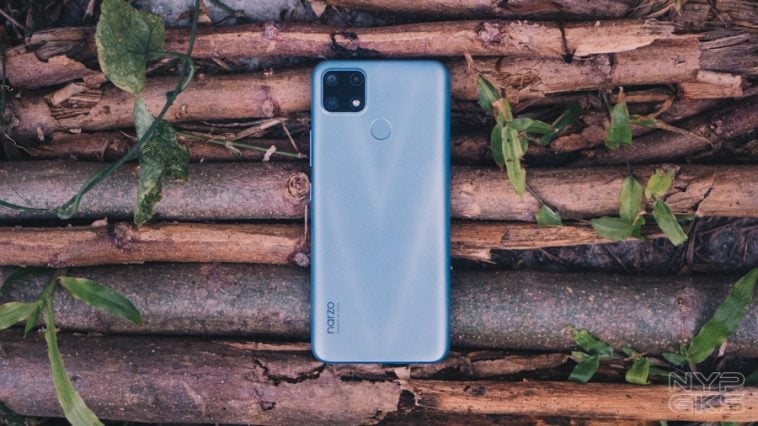 Realme has a lot of compelling budget smartphones under its belt. Adding to that list is the new Realme Narzo 20.

It’s the first time that the Narzo series entered a lot of markets, including here in the Philippines. What we’re curious to see is, what does it offer to make it stand out in this already saturated entry-level market? We find out in our Realme Narzo 20 review.

Realme tried to pack in all the impressive essentials on the Narzo 20’s box. It has a large 18W fast charger, USB Type-C cable, and standard inclusions like a pre-applied screen protector, SIM ejector tool, and documentation.

But unlike most phones, it doesn’t come with a free clear case and a pair of earphones. You have to get them from Realme or other vendors.

Realme sure knows how to make a budget smartphone. The Realme Narzo 20’s design and build is unlike any other Php7,990 smartphones that we’ve seen from other brands. However, it is reminiscent of Realme’s other smartphones in this price category.

It also has a textured back with a V-design that saves you from fingerprint smudges and hairline scratches overtime. The review unit we have is the Blue Shade, while a monochromatic Glory Silver is also available. We’re really liking this clean color complimenting its elegant V-shaped lines and reflections.

The camera glass that holds all three cameras and the LED flash feels unnecessarily large, but at least it sits flush on the back panel with a minimal camera bump.

We also have the noticeably small fingerprint scanner, but it does the job just fine. The Narzo logo, instead of the Realme branding on the bottom right, clearly states that it’s from the company’s special line of smartphones.

The front of the Realme Narzo 20 looks too basic, nothing worth-noting. There’s the enormous 6.5-inch screen, with a waterdrop notch for the selfie camera. The top and sides bezels are fairly thin, while the chin is relatively thicker. There’s a thin opening on the top bezel for the earpiece.

There’s a tray on the left side that can house two nano SIM cards and a microSD card. While on the left, you can spot the volume controls and lock/power switch. The physical buttons feel surprisingly well-made, tactile, and clicky.

We then have the 3.5mm headphone jack at the bottom and the only microphone, loudspeaker, and, thankfully, a USB Type-C port.

One of the highlight features of the Realme Narzo 20 is its enormous 6,000mAh battery. So don’t be surprised that it’s 9.8mm thick and weighs 208g. It feels large and bulky in the hands, but if you’re gonna use it for years, you can get used to its after weeks or months of use.

You really can’t expect too much from a budget phone’s display. For as long as it’s large enough to handle multitasking and multimedia, sharp enough to make small texts readable, and bright enough to make it usable outdoors, you’re pretty much good to go.

That exactly what the 6.5-inch HD+ IPS screen on the Realme Narzo 20 has. The 1600 x 720 pixel resolution might not have the sharpest quality, but I doubt the normal eye can notice any difference.

As for the audio, again, there’s nothing too much to brag about here. The bottom-firing loudspeaker offers decent volume and clarity but with little to no bass, which’s only great for private listening. You can plug in a pair of earphones and play with the Realm Sound Technology in the Sound settings for a better experience.

The Realme Narzo 20 is powered with a gaming-centric 2.0GHz MediaTek Helio G85 octa-core processor, one of the most powerful entry-level CPUs from MediaTek. It’s partnered with a Mali-G52 MC2 GPU, 4GB of RAM, and 64GB of expandable storage.

We have no immediate issues with the performance. Browsing social media feeds was fast, video calls were seamless, taking pictures is fast — all of the basic and daily tasks you require are doable on this machine.

Although occasional and random hiccups and lags is to be expected from a budget phones like this one, but nothing too alarming.

The gaming performance on the Realme Narzo 20 was also satisfactory. We could play Call of Duty Mobile and League of Legends Wild Rift at medium to high settings smoothly with unnoticeable lags and hiccups. Overheating is also not a big issue.

Just like its siblings, the Realme Narzo 20 runs on Android 10-based Realme UI. Unlike other Android interfaces, it has a much cleaner look. It will be updated to Android 11-based Realme UI 2.0 very soon.

Still, the first version of Realme UI is enough to complement the hardware. The home screen and app drawer are clean; there are a few bloatware that can be uninstalled; Soloop app for fast and easy editing with free templates and stickers.

Game Space optimizes the UI and system for a better experience. HeyTap cloud is essentially Realme’s take on iCloud.

Split-screen is also present. Although, with its not-so-large screen and low memory, using two apps side-by-side is finicky.

The Realme Narzo 20 has a rear-mounted fingerprint scanner, which worked fast and accurately during our tests. Face unlock was decent too, but it does struggle at pitch-black rooms.

With the Realme Narzo 20, you’re getting a 48-megapixel main camera, 8-megapixel ultra-wide, and a 2-megapixel sensor. No useless depth sensor or “AI Lens” just to up the numbers. While on the front, we have an 8-megapixel selfie snapper.

The main camera takes 12-megapixel images with pixel binning. The images look clean, with enough details, exposure, and sharpness. You can enable Realme’s Chroma Boost feature to increase the vibrancy for a more Instagram-ready image.

Both the ultra-wide and macro lenses do their job well, giving you the flexibility to whatever you want to shoot. However, the overall quality is not the best.

The 8-megapixel selfie camera is takes acceptable selfies, even in low-light scenarios. Also, it’s more than enough for video calls.

One of the main highlights of the Realme Narzo 20 is its enormous 6,000mAh battery, one of the biggest for the price. In PCMark’s battery loop test (with WiFi Bluetooth off, brightness and volume at 50%), it was able to have 15 hours and 37 minutes of screen-on time before reaching 20%.

In real-world use, that’s about two days of light to moderate usage. Heavy users can expect an entire day of use, with a few juice left for the next day.

Having an 18W fast charging is commendable for the price, but it’s not enough to fill up the battery fast. A 0% to 100% charge may take about four hours.

There’s no denying that the Realme Narzo 20 is one of the best smartphones under Php10,000. It features a clean and surprisingly solid build, a capable processor, a good set of cameras, and a robust battery life.

However, only having an HD screen is a downer, especially when you consider the similarly-priced Redmi Note 9 already has an FHD display. But if you want the biggest battery you can get for the price, going with the Realme Narzo 20 is a no brainer.

Realme Narzo 20 pricing and availability in the Philippines

The Realme Narzo 20 has an official price of Php7,990. You can get it at tons of Realme physical stores, kiosks, and partner shops across the Philippines and through their online shops in Lazada and Shopee.